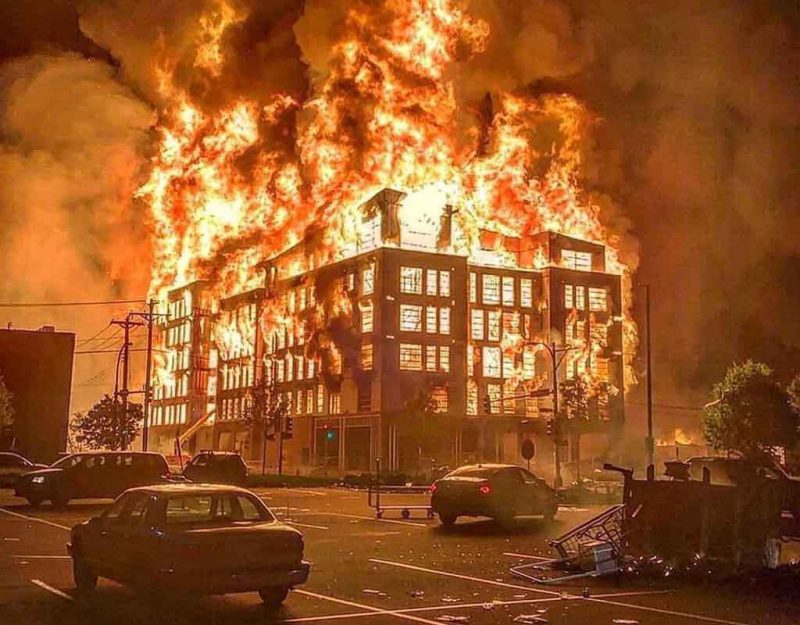 War will always be with us. It will not always be organized, bureaucratic, and played out on the tactical equivalent of an NFL Gridiron. The events playing out in Minnesota are part and parcel to this fundamental principal. This is racial warfare. It is sub rosa. The police see themselves, a few murderous glitches aside; as the defenders of this particular outpost of Western Civilization. The rioters are LARPing the anti-tyrannical role of The Amerikan Revolutionaries at Lexington and Concord.

How do we know this? Because the pacifists have their white flags out already and have totally surrendered. As the 3rd Precinct police station burns, The Mayor of Minneapolis, Minnesota; Jacob Frey wants us all to know what the real strength of Minneapolis is.

Frey accused Trump of “weakness” and added while slapping the podium, “Donald Trump knows nothing about the strength of Minneapolis. We are strong as hell. Is this a difficult time period? Yes. But you better be damned sure that we’re gonna get through this”:

Yet The President’s initial instincts were accurate. He vented as follows on Twitter.

“I can’t stand back & watch this happen to a great American City, Minneapolis. A total lack of leadership. Either the very weak Radical Left Mayor, Jacob Frey, get his act together and bring the City under control, or I will send in the National Guard & get the job done right………These THUGS are dishonoring the memory of George Floyd, and I won’t let that happen. Just spoke to Governor Tim Walz and told him that the Military is with him all the way. Any difficulty and we will assume control but, when the looting starts, the shooting starts. Thank you!

It sets up an opportunity. If The Donald is really The Machiavellian that he is either praised or criticized for being, he has received the opportunity to grab tons of power and perhaps a bunch of electoral votes in the next election. He has a chance to “son” the entire Gaullimaufry of activists, faux-leaders, and frightened Child Mayors. “Sonning” is the ultimate nasty-nice Boomer power move. The term comes from the ghettos of Amerikan Cities, but it is simply a modernized, African-Amerikan version of textbook Machiavellianism.

Trump is an interesting messed-up puppy. There is the Patrician Boomer side of Trump that involves the Maro Lago Golf Club and the yachts. This soothes The Normies, while setting off The Dissident Right like fingers across a chalkboard. Then there is that part of The Donald that makes him positiviely lethal. The Baby Boom had a certain, nasty Street Level Reality that had nothing to do with either Trustfund Prescott Bush or Niel Young’s Choom Commune. Donald Trump knew and had to do business with people like Don King and Al Sharpton. He knows the best recipe for preparing an enemy’s liver cooked with the fava beans.

To understand this concept a bit, let’s look a bit more at the organized chaos of Donald Trump’s Tweet on the subject. This is hard-nosed political speech. First, we evaluate this. “Either the very weak Radical Left Mayor, Jacob Frey, get his act together and bring the City under control, or I will send in the National Guard & get the job done right….”

Trump has his (((Goldstein))) here. And this isn’t entirely propaganda. Mayor Frey played to the outrage politics and attempted to be more BLM than Shaun King with three cans of Black Kiwi Shoe Polish.

Minneapolis Mayor Jacob Frey says last night’s violent protests are a reflection of the reality the black community has faced and 400 years of inequality. He says to ignore it would be to ignore the “values we all claim to have.” The Mayor of Minneapolis, Jacob Frey, gave the passionate speech that he needed to deliver to the hurt and angry black community in his city. He is telling them, their feelings are “not only understandable, they are right.”

Once Mayor Frey told The Huns they had a point, they also quite naturally assummed they had a five-finger discount at several of the local businesses and franchises. And as typically happens when you turn the streets over to the thugs, decent people have to be banished from the vacinity because they are challenging to clean up with a garbage bag and a spatula. Furthermore, they create lots of sticky legal and insurance issues relating to their hideous demise. Mayor Frey’s panderation to the barbaric street rabble has at least temporarily ended civilization in Minneapolis until this situation gets brought under control. This won’t be brought under control using puppies; but rather instead, full-grown Rottweillers and copius emissions of riot gas.

And how does Beneficent and OP’d Boomer-Dad react to this turn of events? With choreographed and condign anger. You see, now Mayor Jacob Frey is like either the bratty kid or the belligerant drunk in The Joe Rogan video below.

It’s not like Mr. Trump blames Poor George Lloyd. “These THUGS are dishonoring the memory of George Floyd, and I won’t let that happen.” But he’s sure going to do something about that idiot fop running Minneapolis. He’ll start by doing the Boomer Move of talking with his manager. “Just spoke to Governor Tim Walz and told him that the Military is with him all the way. Any difficulty and we will assume control but..”

Governor Walz, who is savvy enough to know the deal; does not want the military “with him” any more than small, provincial Danish towns wanted to be occupied by pissed-off Fallschirmjager Brigades for their own good. If Governor Walz would like to continue to enjoy power and professional responsibility in synonymy with his elected office, he might want to make some tough decisions here. The military is “with” Governor Walz to “assist” him in doing his forking job. He would be admonished to get this situation under control. Otherwise, for all intents and purposes, The Donald sez…”You’re Fired!”

If it works, The Donald has won again. Governor Walz plays the heavy here and executes exactly what needs to happen. The Donald can then show up with the aid trucks and bring about all the necessary healing and reconcilliation that his poor, darker-skinned bretheran need. What a nice guy, that Donald! He goes into Election 2020 as everybody’s favorite Grandpa. It’s small wonder that Maxine Waters just popped like an ugly, festering pustule.

So what do we learn from this raging garbage fire of a fustercluck? Precisely the extent to which Democracy failed to bring us out of the era of loosely-organized Italian City States. If The Donald comes off as a manipulative and evil fascist in all of this, it is because only intelligently applied and subtle fascism brings peace. These riots are a power play. The diverse and non-WASP peoples in the Amerikan Empire feel like conquored provinces in The Western Roman Empire. Especially if their genetic phenotype first got here via the slave trade.

Contra Mao Tse Tung; it is peace and order, not revolution; that comes from the barrel of the gun. A society that fails to shoot its looters one day ceases to provide any social order at all. At that point, the society loses the graveman that justifies any of its restrictions or rules. Not a good thing to have happen in the socially-restrictive era of social distancing.

If it comes down to hard, brass tacks; then Minnesota Nice is going bye-bye. What Idiot BLM Mayor Jacob Frey will learn is the same painful lesson that the dope-addles losers learned at Kent State. When the National Guard shoots to kill, it isn’t out of hatred or racism. Love, and .556 rounds, aimed properly at the center of mass; can totally break your heart. (But it’s mostly the .556 Rounds.) That’s what Mayor Jacob Frey has possibly set into motion. That is the Death Train that Donald Trump is doing his Boomer Machiavellian best to derail before it slams into Minneapolis and cities all over Amerika like a ton of Plastic Explosives.