How To Stop School Shootings

The media got trolled hard this week when it was revealed that the Florida school shooter was not a white nationalist as reported, but this troll could have gone much farther. If we could rewind and start again, I would suggest waiting a week or more before revealing the deception.

If we had kept them at it, every single Leftist media outlet on Earth would have been producing dramatic stories about the rise in white nationalist terrorism. Leftist politicians would be calling for banning it (oh wait, they already have). Panic would hit a fever pitch.

And then, the bubble would pop. That in itself is not a bad thing, but it terrifies everyone because when we eliminate the scapegoat, we have to consider the unthinkable: that what something we are doing as part of everyday life has gone wrong and that these school shootings are just a side effect of that.

We hate looking at intrinsic causes. Sort of like drug abuse, drunk driving, domestic violence, corruption, pollution, depression, and loneliness, school shootings seem endemic to the stew of democracy, consumerism, pluralism, and equality that makes up our modern time. They are just part of the landscape.

As it turns out, the media’s new Hitler/George III, the Alt Right, cannot serve as a scapegoat for the Parkland school shooting:

Leon County law enforcement sources told the Tallahassee Democrat that they could not find information linking Cruz, 19, to the Republic of Florida Militia, as claimed by the groupâ€™s self-proclaimed leader Jordan Jereb.

His comments to the Anti-Defamation League and The Associated Press set off a media firestorm Thursday at about midday that Cruz was connected to the alt-right, white nationalist group.

Do not feel bad, media. Your job consists of manufacturing scapegoats. In the last days of the West, there are few who can tackle actual problems, so we are motivated almost exclusively by a desire for non-problems to crusade against so that we can ignore the actual problems. Scapegoating is your way of life.

It would have been convenient if Nikolaus Cruz had been some kind of crazy Nazi so that we could write off this incident as domestic terrorism. Instead we find someone who is just crazy in the midst of a sea of crazy which decided to attack one of your mediocre, tedious, and authoritarian schools instead of simply shooting himself.

After all, if you are going to commit suicide anyway, you might as well take out as many as you can on the way.

This leads us to the unfortunate conclusion that something else is propelling school shootings. We should not wonder long: these are another symptom of social breakdown, sort of like the rampant mental health problems, drug abuse, promiscuity, criminality, corruption, and isolation that we see in society around us.

Why do teenagers take drugs? Probably a combination of misery and boredom, at which point they have no hope of being actually effective in having interesting lives, so like an invalid changing the television channel, they opt for distracting images instead. That these are projected in their minds alone is not material.

That misery comes from the futility of modern life. No matter what you do, the real good that you do will never be recognized, and your life will be dedicated to jumping through hoops so that the herd can approve or at least categorize you as not a threat. Your day will be commuting, shopping, working, and media. It is a dead end rabbit trail.

Adding to this, we have made America into a horror. As a diverse mixed-race group, it has no standards in common and is constantly consumed with internal warfare. People stay home, or avoid it as best they can. Without social standards, we have pursued the lowest common denominator in all things, and ended up being crass as a result.

Couple that with our complete lack of purpose. Why do we survive? Well, um… we gotta pay the bills. And there’s some good stuff on TV. Oh, and a sale at Costco. But otherwise, we are just going through the motions. We are not great like the ancients, or even inspiring like people in the last century. We are just here.

Nikolaus Cruz came from one kind of domestic disaster, was adopted into another, and then basically forgotten by a society distracted with the pursuit of its own drama. He never saw any purpose to life because there is no except gaining individual wealth, and that is passed down from generations who lived in better times to those who live in worse, more pointless, greatly more futile times.

Not to excuse him, because what he did was moronic and evil, but we can point out that history has proven Cruz right to some degree. Witness the laughing, self-congratulatory behavior of the school shooting survivors: 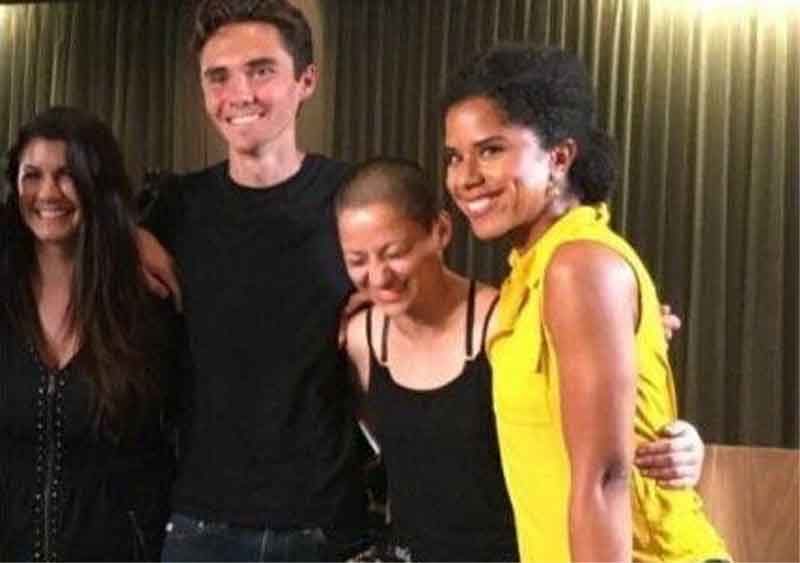 What have we here… a mincing soyboy, a mixed-race lesbian of some sort, a jubilant but incoherent black girl, and a white cheerleader type who looks like she is the produce of trace admixture leading to a moonface like those found in parts of South America. At least, in the 1970s our cheerleaders looked more Western European and well, a lot more attractive. These school shooting survivors look like they have won the lottery, because here is their fifteen minutes of fame. If they can, they will transition to being morning television hosts or book authors or at the very least, trauma survivor inspirational speaks. Here comes the money, which is all anyone cares about because we destroyed our culture in order to be equal, and that is why people shoot up their schools: futility + rage + narcissism = the desire to go out big instead of sticking around to become inculcated into whoring like everyone else.

The English and Australians pride themselves on having thrown their guns away in order to avoid mass shootings, but instead they have created societies that are so prissily annoying in their moral posturing that it might be better to have a dozen school shootings a year just to avoid that fate. The pretense and pacifism that blights the West happens when we rationalize our impotence as “practicality,” instead of looking at the fact that unless you set up a social order, with a strong purpose, and punish the bad and raise up the good, you are not living in a society but a giant shopping mall. It is no surprise that Australia and England have surpassed the United States in lack of culture simply by gutting their own values system in order to be more self-righteous than everyone else.

Like drugs, drunk driving, domestic violence, vandalism, corruption, and every other social problem, school shootings are a question of cause and effect. The cause is not guns; it is the explosion of mental health problems within a society dedicated to the individual, creating pretentious narcissistic prats of two groups: those who deserve to be shot, and those who are suicidal enough to want their fifteen minutes of fame right now before checking out.

If we cared at all about stopping school shootings, we would be institutionalizing or exiling those with evident mental health problems. We do not need them to commit a crime; being crazy is enough of a problem that, in a sense of Darwinism and morality, those who have it should be removed. We need to get over our obsession with human “rights” and equality because those go against the principle of nature that only those who contribute remain in the tribe, and insane people are always a net loss.

We can solve this problem easily by, instead of systematically avoiding any discussion of it, embracing the decline. Yes, we are in decline; yes, we can solve it by having a purpose again instead of being an anarchic shopping mall with babysitters. Somehow that scares us even more than school shootings, so people avoid it.

Either Pluralism Or Anti-Discrimination Will Survive, But Not Both | California Shows Us Where The Leftist Arc Ends