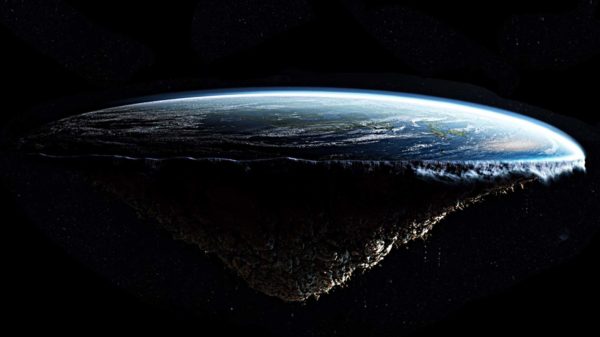 Knowing that the internet has reached the point where sincerity is indistinguishable from trolling, simply because we allowed The Masses to access it, one takes new trends with a grain of salt, and so when a Flat Earth Theory starts making the rounds, the response is to shrug and figure that it is 50% trolls and 50% morons who cancel out your vote in every election.

But the thing about the Flat Earth Theory is that it works as a metaphor. Its appeal is that very few of us have seen enough of the world to claim that it is round, and we do not trust our “official” sources of information. In this sense, the Flat Earth Theory becomes a mental virus, a symbol representing our distrust of the human world around us.

We cannot be unaware of this human world, because it is broadcast to us from televisions, the internet, books, schools, movies, music and the conversation of others. But sometimes, the narrative cracks and we see that it was wrong all along:

A significant body of paleontological evidence suggests early humans diverged from their ape ancestors in Africa. A set of footprints found in Tanzania suggest hominins, the earliest human relatives, were walking upright some 3.7 million years ago.

…Until recently, no hominin fossils older than 1.8 million years had been discovered outside of Africa.

All of not just Leftist ideas, but Leftist policies, are failing at once. The “fast money” doctrine of the Clinton years has brought us increasingly speculative industry and ever-larger bubbles, while diversity has ended in a terror of political correctness and rape gangs, and globalist policies have reduced our economies to dependents on a worldwide market that swings wildly out of control.

Emboldened by years of weak authority under Obama, crazy leaders and groups are rising worldwide. Climate change didn’t happen, but the ecocidal effects of a population swollen with immigration in the name of “diversity” has made life miserable. Adapting our cultures to accept every culture, and thus to be non-cultures, has made our lands alien places populated with angry foreigners.

The result is nothing short of a sea change in how people view our future, which means that we are rejecting old theories and seizing upon time-proven alternatives instead:

When Francis Fukuyama published his â€œEnd of Historyâ€ thesis in 1989, around the time the Berlin Wall fell, we could see through his simplifications on behalf of a kind of capitalism we were weary of. No one among my cohort actually expected history to end, but it did fit into the tenor of the times, when thinkers reached for the universal. We were proud inheritors of the Enlightenment: That was the intellectual legacy we had to improve on, it was to be our perpetual lodestar, if we were not to be trapped in particularistic thought that could have no good results for anyone. True, Allan Bloom had rung the alarm bells not long ago over the new conformity, but we felt sure that intellectual prowess would reign supreme in the end.

When, a little later, the Bosnian slaughter occurred, we framed it not as Muslims versus the rest, but as a direct attack on the human rights principles we had tried to hold on to in the midst of late Cold War paranoia, which was often ridiculously transparent. Around the same time in the early 1990s, Samuel Huntington came out with his â€œClash of Civilizationsâ€ thesis, a direct riposte to Fukuyama, a template for a re-energized worldwide conflict of irresoluble identities that has only grown in intensity with each passing year.

I go over this material because I realize that those who are in their 20s and 30s today have not known any other ideological order. Identity politics â€” the brand of communalism it flows from, i.e., multiculturalism, and the brand of expression it leads to, i.e., political correctness â€” is existentially unassailable for the young. They know no other means of self-understanding, artistic expression or personal solidarity. They can only be organized around this principle. They see the world strictly through this framework, not through some Enlightenment perspective of universal human rights irrespective of oneâ€™s biological identity.

If you read outside the carefully-constructed verbiage, you see that what this author is bemoaning is the rise of particularism or the idea that universalism — the notion that all people are the same, e.g. equal, and can be treated as a fungible commodity — is in fact wrong, and that there is no “we are all one,” but instead a world of many parallels, where each is as tribe that has to find its own path to what works for it, and the two are not comparable.

The difference between these two ideas, particularism and universalism, is night and day. Universalism might be referred to as the philosophy of robots, since it focuses on the minimums of what makes people human, and assumes that these are the most important things. Particularism is essentially localism and nationalism wrapped into one, where people say, “I dunno about this universal human robot you guys are designing, but I can tell you what works in this valley for my people, because here’s our history of what we tried and how well it worked out each time.”

We are transitioning from a millennium of universalism to a new era of particularism. Universalism is seductive because it makes everyone feel important just for being human, and by protecting them from criticism by arguing that they have a “right” to be however they want to be, it is inherently against culture, morality, heritage, values and any other standard which can make a person appear to fall short of what is desired.

The great power of universalism is its simplicity, which makes it seductive: you do whatever you want, and I do whatever I want, and the only cost is that we agree to support this system of mutual anarchy. By ignoring all larger issues of civilization, it reduces the question of society to socializing, and to the not-that-bright average human, seems like a complete solution in one easy idea!

What none of them realize is that they have been fooled, because universalism exists for one purpose, which is to force the sharing of wealth and power. Instead of realizing that wealth and power are not like toys in kindergarten, and should be entrusted only to those who can wield them well, more like Excalibur than the One True Ring, universalists demand that those who produce give to those who do not.

The nature of ideology is that it promises “a better way” through some means other than self-discipline. Individualism, or the notion that the individual is fine just the way they are and should be equally respected even if not a net producer, demands that people be excused from the need for self-discipline, especially adaptation to reality and social standards.

Ironically, this individualism replaces the individuality of a person by forcing them to engage in a cult-like behavior which replaces their inner traits — personality, abilities, moral character — with obedience to dogma:

â€œPeople donâ€™t really understand how strong ideology can be,â€ she says. â€œI think sometimes of that group and that feminism as being close to a cult. I feel I had to de-programme myself in order to have independent thought. Itâ€™s been an ongoing struggle. When you have a cult, you have a cult leader who demands a certain conformity . . . And when you have a celebrity who has cultural-icon status, economic power beyond what you can imagine, you canâ€™t resist that person â€” if you want to stay in their realm. Because once you start challenging them, they kick you out.â€

Cults are based on people adopting an optional or arbitrary idea which they then rely on as part of their personality construct, which in turn allows the cult to control them. Those who do not exhibit enough of the ideal of the cult are excluded, and this creates competition to demonstrate the greatest obedience.

This replaces the identity of the individual with that of the cult, and makes their self-confidence and sense of well-being contingent upon being approved by the cult, much like an abusive social group or family. Those who do not do what the cult wants become the enemy. Total control is achieved by making people desire to be obedient.

A good cult is inconsistent and vindictive, which forces people to be even more aggressive in demonstrating their allegiance by widening the window of forbidden behavior and crowding people into the narrower space remaining. The most successful cults make people believe they have achieved freedom or another Utopian ideal, and they then preemptively retaliate against anyone with a different ideal, which enables them to spread rapidly by demanding that everyone around them be either part of the cult, or an enemy. Once they gain critical mass, everyone within their reach quickly converts or flees.

Egalitarianism may be the most successful cult of all time. People instinctively want to believe that they are equal, so that they do not feel an obligation to use self-discipline to meet any kind of social standard. Instead, they choose to believe that they need to do nothing to understand and adapt to reality, and the freedom from that Darwinian standard makes them feel safe and valuable.

What is most interesting about cults is that they are self-destructive. As if a metaphorical analogue to a cyst, the cult traps the weak in society and bundles them together into a group that destroys them. This happens because a cult at some point either realizes its ambitions, and they fall short, or commits itself to permanent warfare against those it presumes are its opposition, at which point the scapegoat becomes the master and the cult dedicates itself to understanding this contrary view and is absorbed by it.

Modernity has been one giant cult. Since the Renaissance/Enlightenment (PBUH) adoption of individualism as the new and now old form of the West, people have been indoctrinated into defending equality before all else. Equality however requires universalism, which took political form in globalism, and as this reveals itself to be unstable, minds turn elsewhere for archetypes of the future.