Five Ways We Will Face Our Judgment 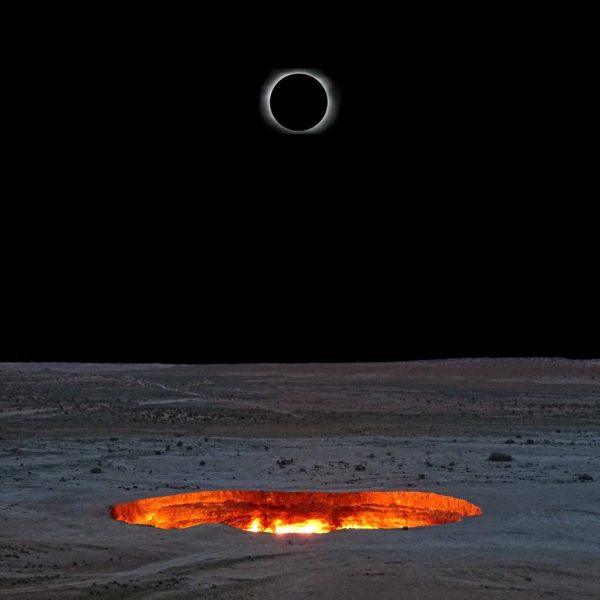 On August 21, 2017, the Black Sun, an ancient omen predicting apocalyptic change, and the alchemical symbol for the blackening of the minds of millions of simian morons, ascended over the continental United States, burning out the retinas of multitudes of obese equal democratic citizens gazing upon its solis splendor through the bleary gaze of protective lenses already under product recall.

This august portent occurred during a time of great political instability. Knowing the mental state of your average Americano, and the mass hysteria in which the remnants of their nation exists, the great portent that is the sol niger — not to be confused with GNAA CEO Gary Niger — signals five possible events that will begin as we enter the negrido phase in our country’s history.

A portal to the underworld opens.

There have been many eclipses throughout history and we have no tangible evidence that a portal to hell has ever been opened. But if the ancient lore is correct, this may happen, at which point we need to think of our future… our financial future. The souls of Leftists do not sell for much in the supernatural realm, but since we have so many Leftists, we can make our money on volume even with thinner margins. The only downside is that whatever sempiternal realm to which we deport them will hate us for infinite dimensions of time and suffering, but caveat emptor and so they probably can’t sue us.

There will already be mass confusion as newly-blinded people stagger around hindered by their obesity, their semi-Christian and New Age beliefs having made them oblivious to the reality that the Chinese flood our stores with cheap and probably illegal products while the electorate is fascinating by finding the perfect angle for its next Facebook profile picture. Their retinas melted as they cry out for more regulation and socialized medicine, forgetting that they ended up at this point because there was no actual certification required other than a bribe. On the bigger picture, this event will make them feel as if they were insignificant meat-sacks wandering around a rock in space whilst bloviating vociferously about their own self-importance, and this momentary glimpse of reality — filtered through a billion minds — will result in a human singularity of recognition of nihilism, at which point most people will simply die rather than admit that the title of Associate Vice President of Social Media Promotions does not actually make them immortal, divine or even intelligent.

This is one of the most likely scenarios. The light of the Black Sun will be unfamiliar to the minds of many, and it may scorch the fabric of their frontal lobes after their gaze into its celestial light. This will result in a situation where humans began to attack each other in a brutal display of nihilistic violence with no regards to God, love, or brotherhood. This is one of the most preferable options as depopulation is greatly needed and at this point nobody sane truly cares all that deeply about the inherent sanctity of life. At this point, if humanity lost its 7.5 billion weakest minds, the remaining few dozens of millions would be able to get their act together and explore the stars, invent zero-point energy and come up with a solution to that weird mildew smell on clothes washed in front-loading machines.

Most people secretly wish for a nuclear exchange because this ends their pointless lives without it being their fault, so in their dim-witted view of how the world works, they can go about in the afterlife eating cheeseburgers and loudly proclaiming that they were victims of circumstance. With the recent North Korea international incident, a world mushroom cloud festival has become more likely. The blackening of the population of this fallen civilization into crispy, roasted charcoal vaguely resembling overcooked pork rinds would be a blessing for good taste. Rumor has it that for several moments, people might focus on real threats instead of the carnival procession of UFO cultists, occultists, scientologists, interdimensional DMT elves, crypto-Jews, Masons, and every other type of intriguing rascal.

Humans generally operate on superstition, and if they develop science, they merely acquire new ways to conceal their cargo cults and worship of golden calves. Right now, half of the country — being born fools — are hoping that by going along with the decline, they will be eaten last. The other half — also congenital idiots — are hoping that by doubling down on the stuff that worked thirty years ago, they can remove the intervening fatal decay. Maybe 50,000 people in North America have some idea of what actually must be done, and they are statistically insignificant, which is the best thing to do with smart people as far as democracy is concerned. The remainder will make their prayers to whatever lunar deities and numerological demigods they can summon, and hope to remove the symbol that awoke us to the fact that our country and the civilization to which it belongs are both in terminal decline. They will demand the impeachment of Donald Trump to satisfy Moloch and Ba’al, and by doing so, will plunge America into Civil War II. This will go nuclear in short order, life on Earth will cease, the ancient ones will chuckle with benign delight, and there will finally be some peace and quiet around here.