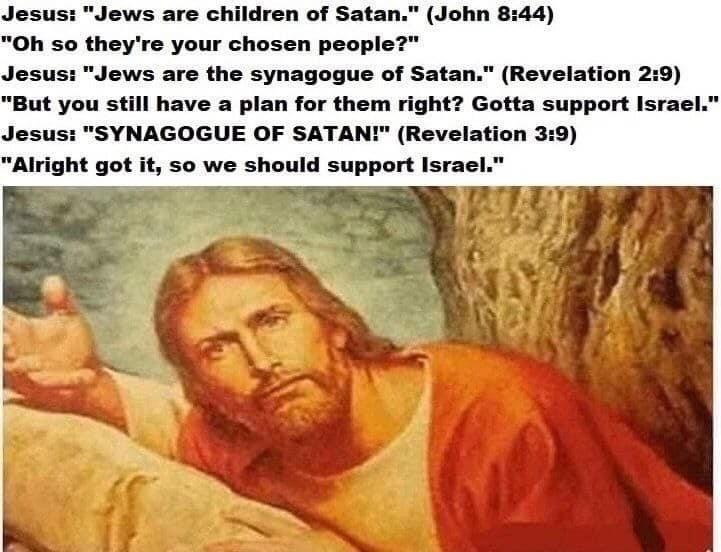 As the Right gains more currency, it needs to address some of its old, bad, and stupid habits like passing around unverified information that is so obviously fake that anyone who does ten minutes of research will consider the source insane.

Above we see a meme that is popular on the Underground Right that features a plaintive looking Christ with the following text:

This is the underground Right mocking the RINOs who appear to preach the same dogma every time, including Christianity and support for Israel, especially as the “Boycott Divest Sanction” pro-Palestinian movement spreads among Leftist groups.

So, let us do that ten minutes of research.

The various groups that support the “Jews = Satan” theory, mostly internet National Socialists, tend to make the claim that Judaism somehow changed during the Biblical era or shortly afterward, so that today’s Jews are not the Jews of the past.

They refer to the new school Jews as “Talmudic Jews” as if the religion itself changed entirely. In reality, they have misread history just as much as they misread the Bible, since the codification of the Talmud did not change the religion of the Jews:

The term “mishnah” (Heb. מִשְׁנָה) is used in a number of different ways (see below), but when used as a proper noun (“the Mishnah”) it designates the collection of rabbinic traditions redacted by Rabbi Judah ha-Nasi (usually called simply “Rabbi”) at the beginning of the third century CE. The Mishnah supplements, complements, clarifies and systematizes the commandments of the Torah. The Torah, for example, commands: “Remember the Sabbath day” (Ex. 20:8). The Mishnah provides this abstract commandment with a concrete form – the kiddush and havdalah rituals which mark the beginning and the ending of the Sabbath day.

The major source of EU ancestry in AJ was found to be Southern Europe (≈60–80% of EU ancestry), with the rest being likely Eastern European. The inferred admixture time was ≈30 generations ago, but multiple lines of evidence suggest that it represents an average over two or more events, pre- and post-dating the founder event experienced by AJ in late medieval times.

Even more, these genetic profiles remain consistent to the formation of Judaism, at which point a middle eastern group incorporated more European ancestry, as well as some North African admixture:

We also detect 3%–5% sub-Saharan African ancestry in all eight of the diverse Jewish populations that we analyzed. For the Jewish admixture, we obtain an average estimated date of about 72 generations. This may reflect descent of these groups from a common ancestral population that already had some African ancestry prior to the Jewish Diasporas.

In other words: middle eastern trading community imports Southern European wives and gets an IQ boost.

Even more, we can see that the admixture of Jews since that time mostly involved elements that were already present, namely Southern European and Eastern European admixture as they passed through Europe:

These results support the view that the Jewish populations largely share a common Middle Eastern ancestry and that over their history they have undergone varying degrees of admixture with non-Jewish populations of European descent.

In other words, the Sephardic and Ashkenazi populations of Jews have a common ancestral root in the middle east but mixed with the European populations that lived around them.

It is silly enough to be an anti-Semite, since the Jews are not the source of the problems produced by equality and democracy. In any society, these lead to corruption, insanity, selfishness, and eventually diversity before moving into tyranny.

It seems even less realistic to be a Christian anti-Semite, since then you are following a religion designed to restore the Jewish people, while attempting to eliminate the Jewish people, all while making absurd statements about how Jews are not actually Jews in order to justify this.

Will Christianity Save the West? | Two Worlds Collide