Will Christianity Save the West?

Every time the conservatives in America get ahead, they are forced to make a difficult decision: “who are we?”

It is one thing to say that you are a conservative, so you conserve the past, but the question then becomes which parts you conserve. Do we want the recent past, with slavery and mercantilism, or the ancient past, with feudalism and kings?

Conservatives splutter and end up saying something like, “we want that which is eternal,” and since almost none of them have any idea what that is, they come back to religion, patriotism, and capitalism.

They could do worse, but this means that they end up missing the bigger picture, which is that they want A Conservative Society: a place where natural order is more important than human intentions.

Sounds like a planned community. “There’s also a pool and a community juicer!” The point is that conservatives need to have a goal, not just a method of resist change. That goal is a conservative society.

However, they fear they cannot achieve this. After all, the big story in history for the past millennium has been liberalization, or the loosening of rules so that individualism can reign. Removing the kings, Enlightening discourse, and all that.

Consequently conservatives look for a way to snowball the uncontroversial in with the controversial, and end up with supporting religion and patriotism as a way of disguising the fact that they like Darwinism, hierarchy, and reward for excellence while punishing or removing the mediocre and bad.

I mean, there is no way to dress up conservatism to make it nice. We hate humanity, or at least the bad parts, and we want to eliminate them and replace them. Like a gardener: tear out the dying plants, nurture the strong ones.

The problem is that by saying, as most conservatives do, that they simply want the society of their youth (the 1980s) and a stronger moral order, they create a proxy. That proxy is Christianity plus the near past, and it obstructs them from getting what they want.

Consequently, every time you see conservatives talking about Jesus, you are looking at defeated men and women. They asked the question of who they were and did not like the answer, so they came up with some marketing jive instead.

The conservative jive proves remarkably consistent and super hipster. “Hey man, I’m just like you, I just want to pursue my individualistic dreams and advantages. For me those include Jesus and the flag. But I pay taxes too, so I’m supporting you too, man, we’re all brothers. We are all one.”

Interestingly, minorities and Leftists do respond to the actual conservative appeal, which is simply “we make shit work.” The Left can be the happy feelings party for when we have extra money, but conservatives fix and renew.

When you see conservatives talking about Jesus, recognize that they are unwilling to say what they really want, which is a hierarchical society based on natural order and not humanism or individualism, a/k/a “what individuals think they want or wish were true.”

The question for conservatives is: how far can Christianity carry you? After all, there was a burst of Jesusing and piety back in the 1980s too, and then we got the 1990s. Abortion is still legal (not that anyone cares) and God is nowhere near the schools.

They might take a look at some statistics. Specifically, the fact that Christianity is dying a slow but consistent death here in the West: the smart people are abandoning this religion like a radioactive dog turd. 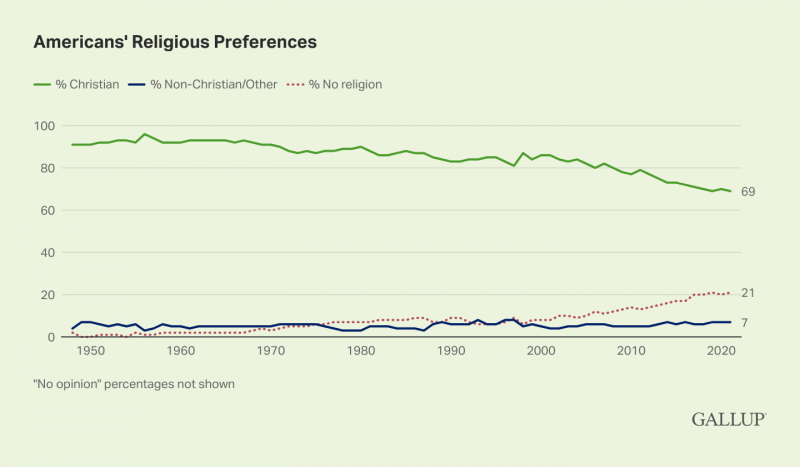 The curve tells more than the actual numbers, which show that most Americans still identify as Christian, but that this number drops every year:

Those who profess Christian belief tend to do so offhandedly, celebrating at Christmas and Easter, but otherwise not incorporating the religion in their lives. It is a lifestyle adornment and not much else.

This is why we see its decline in relevance:

In other words, they may identify as Christians, but they are not particularly invested in this except as part of a broader identity, a natural response to the loss of culture and the focus on an individual and the need to stand out from the crowd.

Even more, few of them are going to church:

The majority seldom or never attend religious services. Watch how the churches are in free fall:

Additionally, less than half of Americans, 47%, belong to a formal house of worship. Church membership has been below the majority level each of the past two years. When Gallup first asked the question in 1937, 73% were members of a church, and as recently as 1999, 70% were.

Even more, 77% of those who said religion was “not at all important” were White. European-Americans are losing their religion in a large way. Only 61% of Whites said that they were “absolutely certain” of their belief in God, and only 49% of them said that religion was “very important” in their lives.

Further, religion appears to be detaching from race as diversity grows, with fewer people identifying as both White and Christian:

Looking at the curve again, we can see a clear indication of the ongoing decay:

Things get gnarlier when we consider that the one generation that seems poised to lead us has essentially bailed on religion:

Members of Generation X – the 35 million Americans born between 1965 and 1972 – have become less Christian and less Republican over the course of their adult lives, a new study by Trinity College shows.

It was only thanks to the addition of approximately one million Latino Catholics their own age that the proportion of Gen X Catholics decreased to only 26 percent of the cohort.

Put another way, the percentage of self-proclaimed Nones increased from 11 percent to 16 percent of this cohort between 1990 and 2008. This increase is surprising since Americans have historically increased their religious identification between early adulthood and their mid-40s, as they marry, have children, and become settled in their communities.

This shows us the ugly teeth of the trend here: instead of becoming more religious as they age, more people are casting aside what their parents taught them because it has lost relevance for them.

Not only are the unaffiliated rising, but more of the Christians are in the “generic Christian” camp of those who do not go to church or study their religion, only have it as a vague cultural identifier.

Symbolic religions do well in times where there is a unified, high-trust society for them to operate within. People are used to following social cues in order to succeed, so they join churches like clubs and political parties.

As they see a lack of utility in these things as well as a lack of social reward because diversity has eaten culture alive, they leave, and become either insincere token believers or simply walk away entirely.

This trend will likely continue with Millennials and Generation Z as they age and find the same thing that Generation X did: the Christianity pushed by our conservatives was more cope.

When we see beneath the shiny surface of society and realize that it is based on mass conformity designed to conceal actual reality, symbols no longer have the power of conviction that they once did. Instead, they look like more of the con.

Conservatives cling to Christianity as a means of, they think, replacing culture with a conservative ideology, but under the Christians, conservatives have steadily lost ground in exchange for symbolic victories on abortion that never last.

While religion is important, it alone cannot save us, nor can we pretend that a religion which is not tied to race will work for us. For those of us who are perennialists, the fact of religion is more important than the specific religion, because perennialism points out that the big religions share the same basic ideas, and we can just adopt those:

But under all this confusion of tongues and myths, of local histories and particularist doctrines, there remains a Highest Common Factor, which is the Perennial Philosophy in what may be called its chemically pure state.

This final purity can never, of course, be expressed by any verbal statement of the philosophy, however undogmatic that statement may be, however deliberately syncretistic. The very fact that it is set down at a certain time by a certain writer, using this or that language, automatically imposes a certain sociological and personal bias on the doctrines so formulated. It is only the act of contemplation when words and even personality are transcended, that the pure state of the Perennial Philosophy can actually be known. The records left by those who have known it in this way make it abundantly clear that all of them, whether Hindu, Buddhist, Hebrew, Taoist, Christian, or Mohammedan, were attempting to describe the same essentially indescribable Fact.

At this point, it makes sense to reach toward what religions have in common and construct a religion for our people out of it, instead of trying to find an existing religion and cling to it as absolute, fundamental, and literal truth despite its symbolic nature.

Conservatives need to find a new way to appeal to people as many flee us, and my suggestion is that we go with “we make things work” and “this is how to be a rising not falling society.”

As liberalism destroys all social order except popularity and replaces all culture with pluralism, more people want to flee that way of life, but they do not want to jump into a version of the same removed only by a few decades back in time.