The great human fallacy is that of blaming the methods and circumstances in which we exist, and not our own choices.

When we are given a golf club, and fail to hit a birdie, we claim the club is at fault. Do we have a genetic predisposition to hate golf clubs? No, but we run into a psychological trap — i.e. on that would afflict any intelligent being in the same situation — where we want to blame anything but ourselves.

This condition arises from morality itself. If we are judged, which means there’s an order outside of nature itself which separates us into kings and beggars, then we are responsible for ourselves. This implies that we created ourselves. 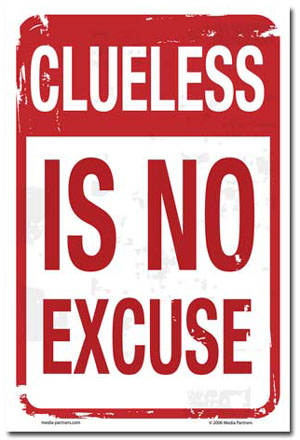 Science, philosophy and religion weigh in from another angle: we did not create ourselves, but are mostly the products of our genes. As a result, when actions occur, arguing whether someone is morally responsible or not is insane. They did what their capacities dictated they do.

We make our choices because of our abilities and intelligence. Within that range, we have the ability to make better choices and less optimal choices. But we still have choices.

Separating ourselves from the idea of our limitations causes us to think we can do anything; however, at the same time, we run into our limitations daily. So we get neurotic and go into denial.

From this comes the idea that anyone or anything that shows our shortcomings is attacking us, personally, because we and we alone are responsible for both our abilities and our choices.

From that comes the sense of entitlement, or the idea that since attacking people is morally bad, we should be free from all criticism of anything we want to do (that’s legal, of course) — no matter how selfish or oblivious it is, or how it will cause in the distant future big problems.

It’s like we have legislated a morality of “don’t interrupt me with reality” and enshrined it as our highest possible value. That is why articles like the following are not surprising:

The driver of a minivan who was seriously injured when she was struck head-on by a drag-racing teenager doing 81 mph is now being sued by the teenager’s passenger, who was also injured.

A lawsuit filed yesterday in Salem Superior Court suggests that Christine Speliotis “carelessly and negligent (sic) failed to avoid the collision with the other vehicle head on.”

Responsibility is far away. Irresponsibility — a manifestation of the idea that we should not interrupt our own thoughts with reality — is close at hand, because it feels good to most people. We like the sound of “free” as in “freedom” and “free agent,” meaning not obligated to others, mostly because most people find most people are not to their taste.

It’s interesting how we separate the concepts of autonomy and irresponsibility when in a social context, as we see above, they are inexorably linked.

The Psychology of Crowds | Social determinism is the new alchemy