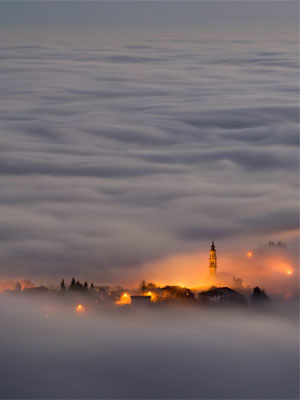 I don’t know if evolution is true. I wasn’t there when it happened, and I know at least as many smart people who deny it as believe it.

However, it fits with what I know of how the universe works: many things flower, some are chosen because they fit, and the cycle begins again, ever-refining.

As I like to remind people, however, this is no way a denial of the various spiritual systems (we often call them “religions”) that spring up on earth.

Any being important enough to be called a god can bend time and space, and make a few billion years happen in a second, or vice-versa. When you’re talking about the divine, there is no way to use the material as a yardstick, except its patterns, in which evolution roughly fits.

One thing that keeps me interested in evolution is its mythic symbolism. Our glorious simian heritage may or may not be fact, but often, we act like monkeys. In fact, there’s a monkey half of us that we wrestle with everyday.

As we experience it, the only force which opposes the inner monkey (let’s call him… Jake?) is the will, in which our thoughts are refined to questions of cause-effect with the intention of acting out our imaginative visions. We see, we learn, we imagine, and instead of projecting, we make incarnate.

There is something divine in that will. Like the force of the universe itself that wrought wonder from nothingness, our minds allow us to fixate on what we find appealing, beautiful… even love might be an appropriate term. In that, we are greater than the sum of our parts.

But every day we struggle with the inner monkey. No matter how smart we are, or how successful, if the inner monkey games us, we lose at life. We have let fear and bodily reactions triumph over imagination and will.

Naturally there are some who have turned their back on this challenge. They do not like the idea that life itself is a performance sport, and that we must master our impulses and become more than the sparking and fizzing of cell-bundles under duress.

These people go down at path that is at first mirthful, then smug, then selfish, and finally, as close to “evil” as I can identify on this earth. Evil is that which turns away from beauty and infinite potential, and focuses on the means and not the ends, as a way to avoid the question of ends.

When you are young, well-intentioned (but wrong) people teach you about symbols of evil that they describe in well-meaning (but wrong) terms to warn you of the path of Satan, evil, etc. These are meaningless. There is no Satan, except as a human symbol. What there is is a choice to go down the path of denying the beauty and potential in life in order to hold on to what you control, and that becomes evil.

Our choices are after all like the ramblings of the Hearst Mansion or an ancient insane asylum, twisty passages that start off innocent but with each step, you’re farther from getting back to where you started. Small detours end up having huge consequences.

Evil is one such path. It starts with a simple motion, like self-pity or resentment, or even excessive pride in something you have done, in opposition to pride for what aeons of ancestors, nature or divine forces have done. The path deepens and soon you are far into the woods, with no idea how to get back to the sunny glade.

Evil does not announce itself. Heavy metal bands and revivalist tracts are united in their desire to show you a lurid Satan, naked adrogynous and powerful. Actual evil is mundane, uninteresting and tragic. It is people turning away from the possibility of beauty, so that they may seize what they feel is tangible and they can hold on to in order to withstand the ravages of time. It is not power they seek, but an absence of power and an absence of cause-effect logic.

Unlike movie evil, real world evil is not exceptional — most people do it — nor is it stupid. It is crafty, because like drug addiction it makes people depend on it. It will never knock at your door and howl like a demon. It disguises itself.

Imagine waking up in the bowels of hell. The first thing you would do is disguise yourself as one of the wretched inhabitants, so they do not figure out who you are and in resentment destroy you. Evil does the same among us here in the middle.

When you go out into this world, evil will present itself as good intentions, fond notions of brotherly love, peace and happiness among people. Evil is not stupid; it knows you long for these things, because they take the load off you that requires you make moral choices and struggle to get them right.

It’s like advertising: you don’t talk about what’s wrong with the product, or how it actually works, but you spin a pleasant fable that gives it mythological abilities for good. It’s not a gadget, it’s a new Utopia just waiting to be found.

In the same way, when you venture out into the modern debacle, you will encounter angry people who want to debase you and make you feel bad about yourself. They appear as sweetness and light, as being “helpful” and well-meaning.

The past is alive | The purpose of conservatism