Detroiting Houston Led to The Great Flood of 2017 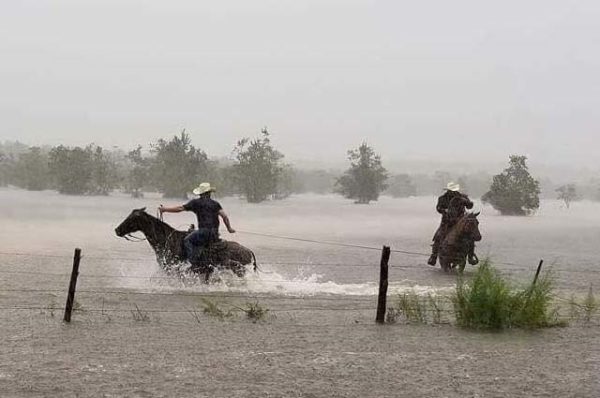 As Houston continues to welter in floodwaters, the postmortem begins, with many finding that growth without infrastructure growth created the groundwork for the floods brought on by Hurricane Harvey:

When the Brookings Institution ranked the prosperity growth of the 100 largest U.S. metropolitan areas, New Orleans came in dead last. (The ranking tracked changes in productivity, average annual wage, and living standards from 2010 to 2015.) Houston, by contrast, was second only to Silicon Valley. Houstonians donâ€™t need to escape the area to build better lives. Theirs is a city of hope where ordinary people come to find jobs, buy houses, and live the middle-class dream.

…Only 17 percent of Houston area homeowners have flood insurance, and federal disaster relief pays a pittance — capped at $33,000 and often much less — compared with the cost of rebuilding.

…Houston is on a flat coastal plain with clay soil that doesnâ€™t absorb water easily. Pavement exacerbates the problem. The glib response is to decry â€œdevelopmentâ€ and advocate stricter regulations — to call for Houston to mimic the unaffordable, anti-growth cities of the West Coast and Northeast.

Houston grew quickly because it offered affordable housing in contrast to the over-regulated areas on the coasts. In theory, as a city grows, it takes in more income and can then dedicated some of that to improved drainage, which in the case of Houston would involve a subterranean cistern leading out of the city, either to the Gulf of Mexico or an outlying area where the water could be stored, updating its 1940s reservoir system.

Unfortunately, that would be expensive, and Houston is broke.

Once upon a time, Houston had a reasonable system for getting rid of excess water, which was to channel it into large reservoirs and then drained those slowly into the bayous, shallow muddy rivers which lead into the gulf. But as Houston doubled in size thanks mostly to immigration — the city is 44.7% Hispanic, not counting the metro area — the reservoirs were forced to collect the runoff from more concrete-covered developments, land which deposits five times as much water as natural land.

This system worked for many years but cannot bear the water load of the new developments:

Houston has quietly become our fourth largest and fastest-growing city, due in large part to cheap housing. But the latter has come at an exorbitant cost to its safety. The swamps and wetlands that once characterized Houstonâ€™s hinterland have been replaced with strip malls and suburban tract homes.

Those landscapes once served as a natural flood protection system for the city. Research shows that, if they hadnâ€™t been filled and developed, Harveyâ€™s impact would have been lessened. Sam Brody and his colleagues at Texas A&M University in Galveston have been predicting an event like this for nearly a decade. That their work went unheeded by Texas policymakers should not be forgotten.

…For a lasting recovery, Houston will need to supplement whatever barrier system it builds with a broader, regional network of wetlands, retention ponds, and green infrastructure to restore the once-robust, natural flood protection lost to a half-century of urban sprawl.

Specifically, Houston’s reservoir system worked when the reservoirs were outside of the city and had nothing but open land beyond them, so that they could discharge into this land. This enabled Houston to survive numerous floods in the 1980s and 1990s, but as the city revived in the 1990s, rising demand for housing caused by immigrants from Mexico and people fleeing high-tax California caused the city to expand outward beyond the reservoirs.

Starting with Tropical Storm Allison in 2001, it became clear that Houston needed a new drainage system. But Democratic mayors Lee Brown, Bill White, Annise Parker and now Sylvester Turner have refused to act. To get elected in Houston, you need to please the minority vote, and they are not interested in saving the mostly-white communities which flooded during Harvey, but they are interested in more pensions and benefits, the burden of which has bankrupted the city.

Interestingly enough, the amount of water produced by Harvey was not that much greater than during previous floods:

Currently the Left is pushing for the non-solution of making zoning the law in Houston, which has been famous a no-zoning city, but all that will do is raise the costs of housing and make government more powerful, which will benefit the same builders who have run the city for years as now they can exclude competition more easily. The real problem at this point is that Houston needs to install a drainage system with powerful pumps, long drainage canals or tunnels, and someplace to put that water which is removed from the city.

It has needed this since Allison made it clear that the new concrete explosion had amplified even smaller storms into disasters, so when facing a crisis like Harvey, the city has no chance to prevail. And yet, under the last sixteen years of Democrats, nothing has been done.

In this, we see a similar pattern to cities like Detroit and Chicago, where the minority swing vote has prevented necessary investment in infrastructure in order to pay for the social benefits favored by the Left. The city avoids investing in the future and therefore, is perpetually playing catch-up, with the result being urban decay.

The entire third world shows signs of this same problem. Short-term thinking has voters approving of more social benefits at the same time there is less money to pay for them, and the result is that these countries default and currency collapse occurs, ensuring perpetual poverty for all but a few who coincidentally often happen to work in government.

Houston shows us how this will play out in America: unable to pass the bills needed to fix infrastructure, despite an abundance of wealth, politicians will find themselves held hostage by the minority swing vote and thus, the only politicians who will run for office are those committed to ignoring long-term problems like floods of Biblical proportions, dooming those communities to collapse.

In the meantime, the people most affected by the flooding are those in the affluent white communities to the West and Southwest. This flooding was not caused by the storms, but by controlled release from the reservoirs. With floodwaters predicted to stay high for two weeks as the reservoirs drain, it is likely that many of the properties in those affluent communities will be worth a lot less, since they will either be teardowns or lose market value because of the certainty of future floods. This means that in addition to its current woes, Houston will experience a sudden crash in property taxes, which are based on property value.

Yet again we see how diversity never produces anything but dysfunction, because diversity is that paradoxical notion that competing groups can replace their individual interests with the intersection of their common interests, which is actually very little. Voters demand what benefits their group and screws the other groups, and in this case, the people who pay all the taxes in Houston found themselves rudely awakened by what minority-majority rule does to a formerly prosperous city.