An Outrage Bubble Ready to Pop

by Jonathan Peter Wilkinson on September 3, 2017 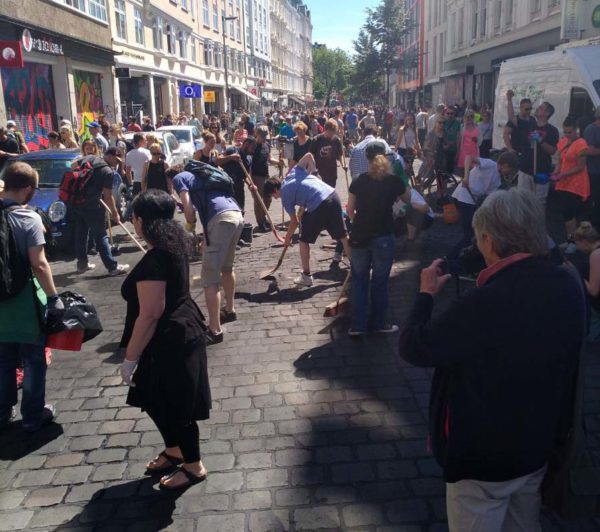 Chris Matthews knew one big thing, one very big thing in the run-up to the 2008 Election. As much as I’d love to watch him get treated to the same attack-dog opprobrium he regularly dishes out to anyone holding opinions to the Right of say, Salvador Allende, he was in early for the kill on Barack Hussein Obama.

Matthews speaks of having a tingle run up his legs when he realized that, finally, he was a pundit who was getting it right before anyone else. I get the same tingle he did when I look at what is now commonly accepted but will soon fall. Amerika is in the midst of yet another bubble. This is the social equivalent to the housing bubble or securities debt bubble. We are experiencing an outrage bubble.

This bubble seems like life as normal now, but it is over-ripe and ready to fall. It is being overinflated by an over-indulgence in altruistic and egalitarian attention whoring that is divorcing mainstream consciousness from the reality that actually exists on the ground. The asset being traded isn’t economic. It is social and political goodwill. The market is public opinion. The securities, so to speak, are political positions vis-a-vis American History and the roles of various ethnic groups therein.

Three idiot tribes are currently over-exposed in this market. These tribes are the SJWs, the SWPLs and the Cucks. Here is how each group contributes through the typical driving mixture between greed and fear.

SJWs want to destroy any vestige of White, European Culture in the United States. This culture tends to be more resistant to Socialism, protective of private property and resistant to centralized government. It’s very hard to collectivize the land you don’t own, held by people who believe you to be dealing from a deck that’s light a few cards with a government not powerful enough to make them zip their soup-coolers.

They therefore resort to shaming tactics in order to make people do their bidding. They claim to want equality in order to disarm their political opposition. They talk about slavery in order to expand their control over others. They talk about history that they deliberately twist and misrepresent to fit within what they believe will be an empowering narrative. SJWs Then they resort to violence out of frustration and greed for power. It’s at this juncture the bubble begins to inflate.

SWPLs are rich and powerful people of who happen to fit well within the target demographics of the SJWs. They, therefore, feel a sense of risk. In order to assuage this risk, they take two steps.

1) They position themselves as lovers of diversity. They loudly say all the things SJWs agree with. Their tongues grow blisters from the licking of the SJW jack-boot. And yet the dogs remain both rabid and hungry. Once you’ve accepted the disingenuous premise that prior historical injustice produces a valid claim to the assets of others in the present, the beast remains hungry and must be fed or it will not even temporarily agree to relent. This brings us to the second step of the SWPL two-step.

2) They shift the blame to the cultural, social and political right. They proclaim themselves better than those people — who, in order to keep their class consciousness intact, they describe as dirt people living in trailers — and stake them out there for the #JW ants. They scapegoat traditionalists, Conservatives, and any other Rightist they can pin a bullseye on.

Cucks then panic because they’ve been illuminated as targets by the SJWs. They attempt to isolate some form of “Evil Right.” They choose a bundle of issue to concede to the SJW/SWPL faction and then pass the threat of annihilation on to this “Evil Right.” In a sense, they are now an Outer Party of INGSOC as they loudly proclaim their love for Big Brother.

Yet every INGSOC needs a (((Goldstein))). It is at this point that they begin “Alt-Righting” as a means to better distribute the risk and shift the falsely-apportioned blame. The SJWs are repeatedly sent after scapegoats in hopes that the bloodlust will be sated. It’s like a game of musical chairs where the ones left standing get shot after the music stops.

This equilibrium is prone to metastasis at best, which means, like The Yellowstone Caldera, it will eventually have days where it is no longer particularly viable. There are approximately 200K actual Nazis in the US according to people with nothing better to do with their existence than count. This depends on how you define Nazi. If you include jailhouse Nazis who carve swastikas on their bodies only in return for protection from having their rectums frequently violated, you are wildly overestimating the Nazi Census. Let’s say half to two-thirds of the Nazis in the US are recruited through the corrections system. If only 50% of them actually think Hitler was a mensch, you are now down to 125K to 150K. Antifa should be able to kill and eat all of those and then take a dump before lunch. The next morning, they still wake up hungry.

So once you’ve run through the Nazis like the junk food aisle at your local filling station, who do you throw in the insatiable SJW wood-chipper next? Right now, that would seem to be anyone the Cucks decide to point at and scream like the Pod-People from a bad Sci-Fi film. So how is this a bubble? Two ways.

1) There is finite supply of people who are Nazis, pseudo-Nazis or even loseroids who just have hair-dos inspired by Der Fuhrer. There is an infinite supply of moronic people looking to eat a scapegoat rather than fix the surrounding, pervasive dysfunction. Eventually, they start running short of Kulaks.

The â€œsanction of the victimâ€ is the willingness of the good to suffer at the hands of the evil, to accept the role of sacrificial victim for the â€œsinâ€ of creating values.

One man with courage tends to become a majority. What happens when the SJW train hits this roadblock? They lean on the SWPLs. The SWPLs give them money to continue their operations to avoid unpleasantness. The SJWs then lean hard on the #Cucks the way a loan shark goes in on a mark who has let the juice run a few days.

It’s then that the Cucks point the panicked finger of blame. They may not really believe you’re a Nazi, but they damn well believe they want #BLM off their verdant, meticulously-tended lawns. So what then happens to the Cucks when Mr. Big explains some physics to them. He tells them succinctly that it ain’t gonna suck itself. The whole fraud train crashes like the train in the tunnel scene from Atlas Shrugged. Do you feel any current running through the nerves in your legs yet?

Antiwork: Bureaucracy, Not Capitalism, Is Crushing Your Soul Through Jobs | Detroiting Houston Led to The Great Flood of 2017