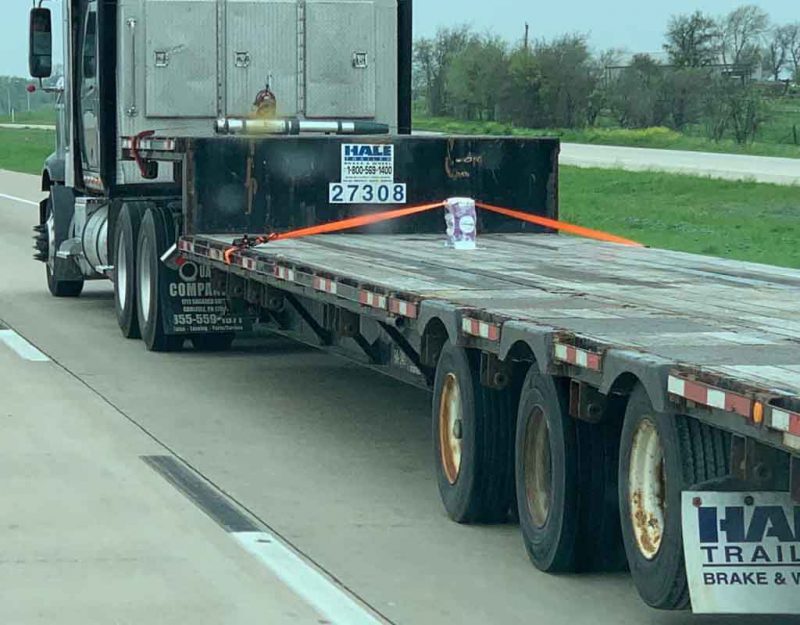 Just like the government shutdown, the coronavirus has frozen most of society in place, and this not only provides for a saner life but shows us what we do not need.

Maybe the permanent government dependents are freaking out, since they lose services. Perhaps big business is suffering, although it seems that around here at least everyone who could went to their jobs, with the exception of food service type people.

Crises tend to reveal us, just as characters in novels only come to know themselves when pushed. Our brush with the Wuhan AIDS-Flu has shown two things: first, that our society has no internal loyalty or trust; second, that we can do without most of it and are in fact better off.

Did we need three hundred different types of soft drinks? Nope, we needed water, meat/veg, and toilet paper. Did we need three thousand government agencies? Nope, just basic law enforcement. We did not need the entertainment industry, most of the media, or politicians either.

People are starting to notice that life without the endless activity for the sake of activity of modern society is not only more peaceful, but less ugly:

Within days of the closure, Venetians were startled to see that their canals and perimeter waterways becalmed. Without the usual human tumult churning the waters, the canals were suddenly still and clear.

Tourism exists because people need a substitute for the actual good life. They work all year doing little of importance at their tool jobs, taking demands seriously that amount to little more than people grandstanding to seem important so they can claim more money.

This money, by the way, comes from the past, and the inventions we made from structured law through technology that enable us to get by with less work. Instead of taking time off, however, we are all in competition for importance, thanks to equality, so we all labor endlessly on make-work.

Right now, the Left is pushing for this pandemic to be the final war that covers all of the Earth in socialism and diversity, but in the hearts of our people, several things have died, and not a moment too soon.

First, diversity has died. When your community consists of multiple ethnic groups, they compete, since only one can rule all and no one trusts the “we swear to treat you like anyone else” schtick coming from another ethnic group. Everyone wants power. All desire it invisibly through money if possible.

Second, globalism has died. Nations which cannot manufacture their own aerators, ibuprofen, syringes, and chloroquine have found themselves at the mercy of others, and often missing out. Those which depend on foreign labor to keep their institutions running similarly encounter problems.

Finally, faith in modern society has died. All that chrome and glass, all of the promises of modern medicine and the “scientific truth” spread by our new gods in industry and media, and the perceived power of modern society over nature have become transparent veils.

We can see through them now. Now that they have failed, and have failed to protect us or tell us anything resembling the truth, we no longer trust them. Our leaders seem to have trusted China, which lied about how far the epidemic had spread, and then came up with no useful solutions.

In fact, one of the things killing diversity is the simple fact that no one knows who is in the country anymore, so no one has any idea who to quarantine. Germany had great success by keeping track of its citizens and isolating those exposed to the virus; nothing like that could happen here!

When people do not trust each other, they hoard supplies:

“People are losing their minds about this product,” said Brian Brito, president of SMP Pharmacy Solutions in Miami. “We’re selling so much of this stuff and people are just stockpiling it prophylactically if anybody in their family gets sick — they’re just holding on to it.”

After all, if you have nothing in common with your fellow citizens, you are forced into the same “me first” doctrine that everyone else uses; selfishness spreads like a plague, and may be the real pandemic.

Everyone wanted to come here for the easy money and safe streets. The people here wanted to make money hiring out cheap labor. The unions stole everything, and this drove others to outsource. We are at war with ourselves, and globalism was a work-around to keep the vending machines stocked.

Even more, efforts to contain the virus have revealed broken modern lives like a divine intervention:

This avalanche of information has included some embarrassing revelations.

One involved a man in his 50s who returned from Wuhan province in China – where the outbreak started – with his 30-year-old secretary. Both were infected in the early days of the epidemic.

In another case, reported by the BBC, one alert said a man contracted the virus from an instructor during a sexual harassment class.

While modern society seemed to be going along just fine, admittedly in a haze of misery and boredom, people surmised that it would never change. We had reached the ultimate evolution of human government. This caused them to behave like Soviet citizens.

That is, they lived one life in public, and in private, in retribution for the boredom and control, they lashed out with bad behavior. Not just drugs, affairs, pornography, alcoholism, and promiscuity, but deliberate withdrawal from others and the cruelty of daily lies.

How many people spend their nights at a bar, going to the convenience store next door to talk about how they are “working late again” and will be home after everyone else is in bed? How many people go to movies alone, or lead double lives so they can pursue interests outside of their families?

In addition to that, we are seeing how we depend on totalitarian regimes for much of our medicine, something that we would have found alien only a generation ago:

Where once only a few specialists worried about the market share enjoyed by the industrial chemists of Hohhot or Shijiazhuang, China’s dominance of the active pharmaceutical ingredient (API) sector is now the subject of hard questions in Washington’s corridors of power and the chancelleries of Europe. Ending the world’s dependence on Chinese APIs would not be a technical challenge. China has not been dominant for long. America’s last penicillin fermenter closed in 2004, as clusters of Chinese factories, many state-owned or subsidised, offered efficiencies that foreign rivals could not match. Rather, change would involve upending well-established political and economic theories, starting with the wisdom of allowing private companies to seek out the best-value goods, with little heed paid to their origin.

Perhaps the greatest death goes to the idea of anonymity itself. We no longer believe we are only responsible to ourselves; we are responsible to the group, and in a broader sense, to our civilization and its continuity from past to future.

Coronavirus has shown navel-gazing neurotic modern people that the individual is not the largest and most important thing in life; having others, like family and community, to carry on when we cannot also proves important.

Even more, we get nostalgic about what we would miss if we were to die today. We would miss the old cathedrals, great symphonies, wild novels, and breathtaking art. We would miss our people, where all the stuff we lived for before COVID-19 like jobs, shopping, and equality make very little impression.

We are headed back to dark medieval times when anonymity is viewed as evil, and people see themselves not just as part of a community, but part of an invisible order that pervades all life, in which they have a position both in a hierarchy and in specialization, where only they can do what they do.

In fact, we start to imagine a world where order prevailed over the desires of individuals, sort of like in this passage from Michel Foucault Discipline and Punish: The Birth of the Prison:

The following, according to an order published at the end of the seventeenth century, were the measures to be taken when the plague appeared in a town.1First, a strict spatial partitioning: the closing of the town and its outlying districts, a prohibition to leave the town on pain of death,the killing of all stray animals; the division of the town into distinct quarters, each governed by an intendant. Each street is placed under the authority of a syndic, who keeps it under surveillance; if he leaves the street, he will be condemned to death.

On the appointed day, everyone is ordered to stay indoors: it is forbidden to leave on pain of death. The syndic himself comes to lock the door of each house from the outside; he takes the key with him and hands it over to the intendant of the quarter; the intendant keeps it until the end of the quarantine. Each family will have made its own provisions; but, for bread and wine, small wooden canals are set up)between the street and the interior of the houses, thus allowing each person to receive his ration without communicating with the sup­pliers and other residents; meat, fish and herbs will be hoisted upinto the houses with pulleys and baskets. If it is absolutely necessary to leave the house, it will be done in turn, avoiding any meeting. Only the intendants, syndics and guards will move about the streets and also, between the infected houses, from one corpse to another, the ‘crows’, who can be left to die: these are ‘people of little substance who carry the sick, bury the dead, clean and do many vile and abject offices’.

It is a segmented, immobile, frozen space. Each individual is fixed in his place. And, if he moves, he does so at the risk of his life, contagion or punishment.Inspection functions ceaselessly. The gaze is alert everywhere: ‘A considerable body of militia, commanded by good officers and men of substance’, guards at the gates, at the town hall and in every quarter to ensure the prompt obedience of the people and the most absolute authority of the magistrates, ‘as also to observe all disorder,theft and extortion’.

At each of the town gates there will be an observation post; at the end of each street sentinels. Every day, the intendant visits the quarter in his charge, inquires whether the syndics have carried out their tasks, whether the inhabitants have anything to complain of; they ‘observe their actions’. Every day,too, the syndic goes into the street for which he is responsible;stops before each house: gets all the inhabitants to appear at the windows (those who live overlooking the courtyard will be allo­cated a window looking onto the street at which no one but they may show themselves); he calls each of them by name; informs himself as to the state of each and every one of them – ‘in which respect the inhabitants will be compelled to speak the truth under pain of death’; if someone does not appear at the window, the syndic must ask why: ‘In this way he will find out easily enough whether dead or sick are being concealed. Everyone locked up in his cage, everyone at his window, answering to his name and showing himself when asked – it is the great review of the living and the dead.

Possibly we will not go this far, but we have seen how deviating too much from this model leads to a society where whoever is most selfish lies in order to appear a victim, and therefore becomes entitled, and exploits society for their own gain.

While we were rich and oblivious, we could simply pass the buck and let society bear the cost, but now it has become obvious that a “death of a thousand cuts” added up many little costs to become a form of doom. Coronavirus came calling, and now we can no longer live as we did.