Another Reason Senility Joe Would Be A Bad President: The Debt Jubilee

by Jonathan Peter Wilkinson on December 2, 2020 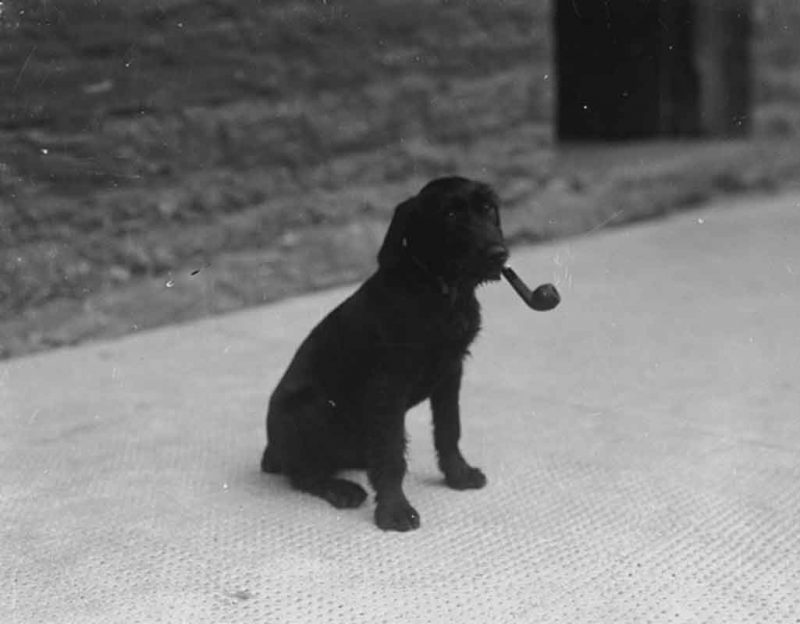 Democracy is a form of government where any code of decency or honor you hold to can and will be used against you as a weapon. It all ultimately becomes a group of wolves and a smaller group of sheep holding a plebiscite to decide who gets to munch whom. Democracy, once it’s stripped of logical and condign protections from actual, real-life people; is a three step algorithm.

2) Decide who’s unpopular and defame, unplatform, and strip them of power and defenses.

3) Screw them through every orifice and then drill a few new ones if that doesn’t get your freak on.

Credit where credit is due. Canceling outstanding federal student debt up to $50,000 unilaterally via executive order is exactly the kind of bold step that most of his left-wing critics had suggested President-elect Joe Biden would be reluctant to undertake.

Now this guy, Matthew Walther who writes for The Week, wants us all to know that he’s not just some type of mooch or anything. He just wants fundamental fairness.

But politics should not be about resentment or taking away the other team’s goodies. The fact that such a proposal would disproportionately benefit high-earning professionals does not make it a bad one. But it should be expanded into a debt jubilee that would cancel all obligations up to the same five-figure sum proposed by Schumer: credit cards, auto loans, remaining mortgage balances, and, especially, medical debts, which should be discharged without any limit.

But that Solon of Corrupt and Amoral Solipsism Joe Biden shouldn’t be imprudent. He might start doing crack-pot stuff like withdrawing US troops from the money and gore pit known as Afghanistan.

It would of course be foolish to declare such a jubilee if no attempt were made to eliminate the conditions that will give rise to the endemic levels of indebtedness. We should ban so-called “payday” lending immediately, along with fees for overdrawn checking accounts. We should also establish a postal banking system, one that gives every American adult access to a small interest-free line of credit, the ability to cash, deposit, and write checks, a secure card for payments, and a ready means of receiving federal tax refunds.

OK Sparky. Let’s have a talk about why we have so much debt. Let’s start with some basic government policy. We currently practice an economic policy that is colloquially referred to as loose money. Loose money involves a supply of currency that systematically increases every year. This will make it a better idea to borrow than it is to lend. This is because increasing the monetary float abroad in the economy makes each individual unit of currency a less effective store of value due to overabundance. This loss of value shows up in terms of prices and in the receipt of lower value for the same amount of currency at a later date.

First, we’ll start with prices. The chart below shows a 90 year history of the price of 1 Gallon of Gasoline in USD. 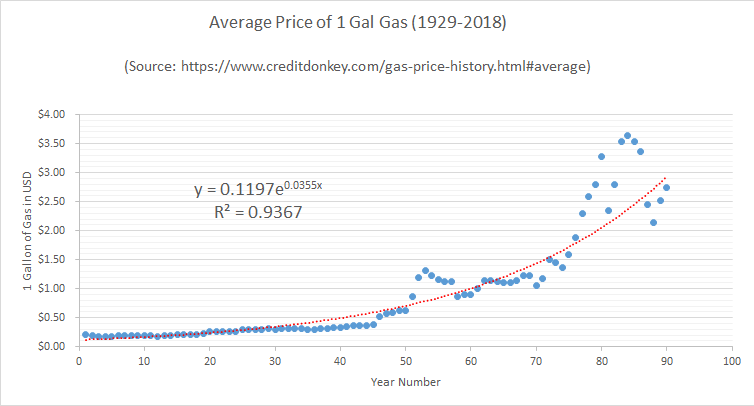 The price follows a trend of (y = 0.1197e^0.0355x). This is an exponential function with an exponent of 0.0355. This coefficient is the annual increase in price or what we would refer to as inflation. At first glance, gasoline has historically increased in price at an average rate of 3.55% over the last 90 years.

This, however isn’t a necessarily accurate picture of how decisions made by American leaders have impacted price levels. It helps to split this graph into periods representing different financial policy regimes that impacted what happened to gasoline prices. I identify 4 regimes that I describe and then calculate inflation for below.

1) Pre-Bretton-Woods (1929-1973) – This could be described as about as tight a US money supply as we have had in recent history. The USA was on a gold standard meaning that the US Dollar was at least theoretically backed by metallic specie. This resulted in a high degree of price stability. Here is are the prices for a gallon of gasoline from 1929 to 1973. 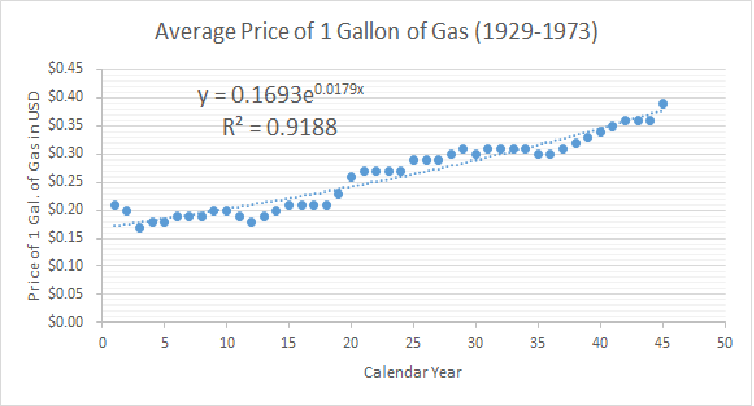 The price follows a trend of (y = 0.1693e^0.0179x). This has an exponential coefficient of 0.0179. This corresponds with an annual price increase = 1.79%. It is no accident that automobiles were affordable and that Interstate Highways got built under this monetary regime.

2) Pre-Financialization / Fiat Currency (1974-1987) – After The Bretton Woods agreement, the US Dollar was deemed a fiat currency. This disconnected the value of a dollar from the value of 1 Oz of Gold. This allowed the dollar to trend independently and for the government to operate in currency markets to control the price of the dollar. This resulted in a loss of value for the dollar as more could be created without reference to the supply of minable gold. The predictably unstable price regime follows below. 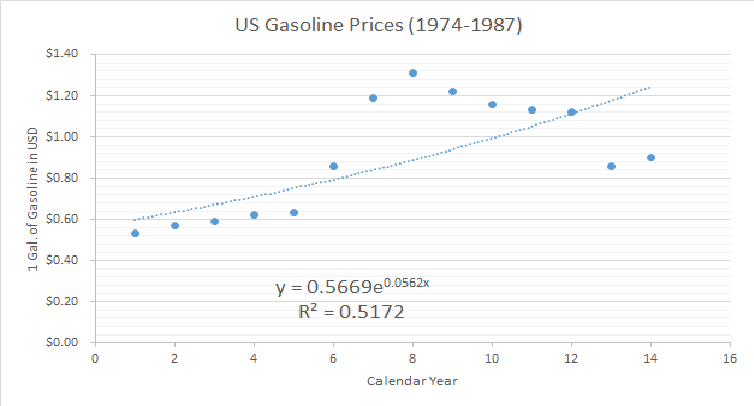 The Gasoline Price notionally follows a trend of (y = 0.5669e^0.0562x). This would imply 5.62% annual inflation. However, the price fluctuated so badly that the R^2 of the trend equation barely cracked 50%. This suggests that the government was nowhere near as in control of its currency as they tried to claim.

3) Financialization of Fiat Currency (1988-2012) – The financial industry reacted to instabilities in the markets for money by financializing hard assets via derivative securities. Instruments such as Mortgage-Backed Securities allowed the spreading of risk over many borrowers simultaneously. This allowed credit to be even more widely extended. This further accelerated the rate of inflation seem for bed-rock assets such as gasoline. This price regime follows below. 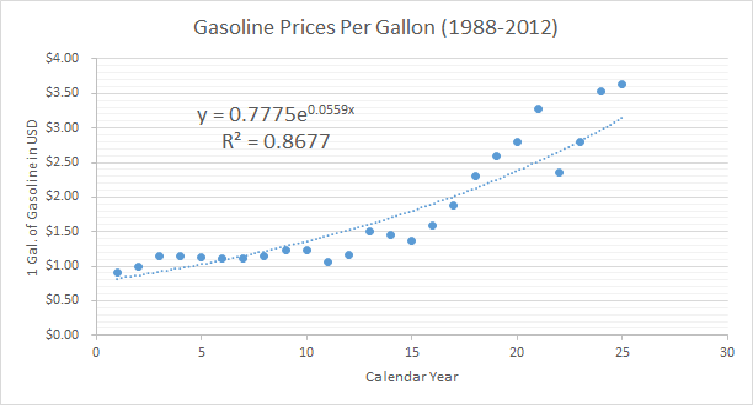 The Gasoline Price follows a trend of (y = 0.7775e^0.0559x). This implies an annual inflation rate of 5.59%. The R^2 on this trend is significantly more predictable at 87%. This suggests that money was being created at a steadier rate which led to a more predictable erosion of currency values in comparison to scarce and valuable assets. This trend, however; was unsustainable and the market struck back.

4) The Fracking Governed Price Regime (2013-2018) – This phase of the data shows the impact of technological innovation on the price level of 1 valuable commodity. The sparse number of data points permits only general commentary to be accurate. It’s generally obvious that the price of gasoline got leveraged down by 33% over a 6 year period by emergent technology. This solves 1 problem in one commodity group.

Which brings us around to what happens when there is no solution. A large crowd of people want a lot of something that none of them can afford because too much currency is abroad and the individual dollar bill is approaching an asymptotical minimal value. The crowd demands the good anyway, and credit is extended regardless of worthiness of the borrower.

The issue is for people who didn’t just borrow money they couldn’t repay. The issue is prospective scholars who did it the hard and honorable GI Bill way and came back from Basra or Fallujah with missing pieces of face. The issue is people who have their municipal or union retirement portfolios in bonds that are stripped of return due to the Federal Reserve keeping interest rates low to make college loans more tenable. The issue is anyone who was dumb enough to play by the rules and not expect a debt jubilee every time they dorked up one of life’s big decisions. That issue rears its ugly head every two weeks or so when your check goes into a bank account and pays pig offal interest.

One day that will lead us to a bigger issue. That issue will be what happens when that derpy guy at the poker table figures out that he isn’t always losing his money due to rotten luck. That issue will happen when everyone not getting a debt jubilee from Joe Senility has just about had it with getting screwed for playing by the rules. If you think it gets rough when Antifa and BLM rage against the machine, just wait until most of the smarter and more productive people say screw it and just lounge against the sucker. Without any foolish chumps to take the loss for all the fairness, that debt jubilee will turn very bad, really fast.