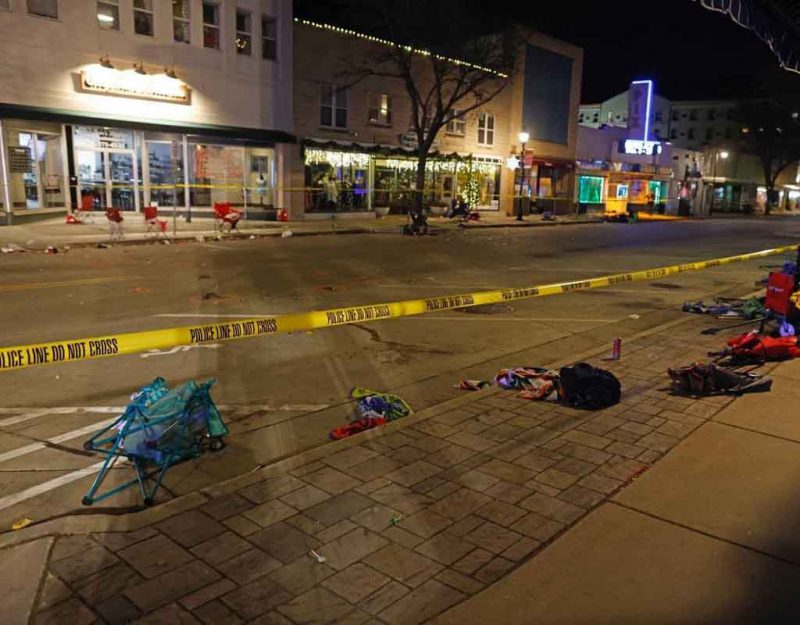 Kyle Rittenhouse was acquitted for dubious murder charges after obvious self-defense, the Leftist media called him a “White Supremacist,” and shortly thereafter, the diversity behaved as intended: enforcing domestic terror in order to scare the voters into relenting and allowing White Genocide to proceed.

In this case, an African-American decided to employ the time-honored Euro-Muslim Car of Peace technique:

A red SUV sped past a police checkpoint and barreled directly into children marching in a Christmas parade in Wisconsin on Sunday evening, killing at least five and injuring dozens.

Video shared on social media and news media showed the vehicle striking a group of girls wearing Santa hats and plowing into a marching band.

“At this time, we can confirm that 5 people are deceased and over 40 are injured,” the city’s official Twitter account announced.

How could anything else have resulted, given the rabble rousing of the Left?

As we forecasted, the acquittal is now a beacon-like green light granting permission to violent right-wing extremists to openly wage the kind of “civil war” against “the left”—which ranges from liberal Democrats like Joe Biden to the “antifa” bogeyman they have concocted—that they have been fantasizing about for the past decade. In the words of Charlie Kirk’s interlocutor, it’s the signal that now they “get to use the guns.”

The bloodlust has been palpable. Online trolls celebrated that “it’s Open Season on pedo-commies” and boasted that the verdict means “there’s nothing you can do about it.” A neo-Nazi channel on Twitter urged readers to “let this win fuel your rage.” A fan of pseudo-journalist Andy Ngo commented in a retweet: “Every one of these anarchist criminal thugs should be shot in the street like the worthless dogs they are.”

The alleged perpetrator, reading such things, probably bought into the idea that Rittenhouse was somehow acting for “White Supremacy,” despite having snuffed several mixed-race pedophiles, wife-beaters, and heroin addicts.

Allegedly the music and video of the alleged “car of peace” driver:

In the bigger picture, the outcome could never be anything except this.

Diversity pits ethnic groups against each other. It erases the culture of the majority in order to create a new neutral anti-culture which forces inclusion of the standards, behavior, calendar, cuisine, and aesthetics of other groups.

African-Americans, no matter how much money or power you give them, will remember that they were brought here as slaves because their own people were either going to kill them or sell them. This is humiliating enough, but add to it two hundred years of democracy bungling and fumbling about how to make things “equal” just makes it condescending.

They will never be happy here, just like no group except the founding group — ethnic Western European Nordid-Cromagnid-Dalofaelids, or “WASPs” in our modern shorthand — will ever be happy here.

They have no future except to protest and destroy, just like outsider groups from the Irish onward have done. They do not want to “become Americans,” they want to replace America because their only other option is to remain in a subject position and be ruled by America.

Imagine all that frustration building up over years. Every day, your role as former slaves and now economic objects of this foreign culture eats at you.

No matter how much money, how many Oscars, and even presidencies they give you, you will always feel like an alienated victim in a foreign land run by people who might kill you at any time.

It’s no fun to be an African-American, or any other diversity in America, for this reason.

However, equality — the disease that has brainwashed and destroyed the West since The Enlightenment™ — demands that we have diversity and pluralism so that we can prove that human individuals are finally equal and free, meaning beholden to nothing, including nature, the gods, common sense, decency, logic, culture, and history.

The human ego is a voracious beast and will eat up everything, including all of the life on Earth, before it admits humility and accepts its role as one niche in a complex hierarchy. As part of this it wants one world with no borders.

We are clinging to diversity as a concept simply because not doing so implies that we are not on board with the great egalitarian march toward progress, equality, and Utopia.

If we thought about reality for a few seconds, we would see that not only is diversity not working, but it has never worked anywhere throughout history, and because its goals are paradoxical, will never work. It will not function like a successful program by government, only destroy civilization and leave behind ruins.

We can see the future of diversity expanding on our streets:

Police say the victim was leaving his home after dropping off a delivery to his family after midnight on the 3200 block of Longshore Avenue.

While the suspects were looking through the victim’s car for cash, he pulled out his gun and fired, according to police.

“I don’t really like violence, but it’s in self-defense, so if he didn’t shoot them, they might have shot him, so I think, in that case, there’s not much he can do,” said Gail of Mayfair.

In this case, an Asian delivery driver defended himself with lethal force against three African-American males.

We got a free ride for the past half-century by believing the narrative that said that Whites are the source of our diversity problems, and that White resistance to diversity was the only thing causing friction.

Now, we see that it was always diversity itself. Whites and Blacks are blameless in this, but caught up in a tragically insane order which always ends badly. We have now added other groups to the slaughter.

Each group realizes that unless it has total autonomy, meaning dominance of its territory and exclusion or subjugation of all others, it lives daily under the threat of others. Consequently, all racial, ethnic, religious, and cultural groups are scheming to take over America and depose everyone else.

We have no hope of survival except by ending diversity, not by the methods that Hitler chose, but reparations-with-repatriation, since this ends a massive historical wound to the benefit of all.

Don’t Trust Anyone Who Takes a Paycheck | Incentives Drive Government