An ethnic of convenience 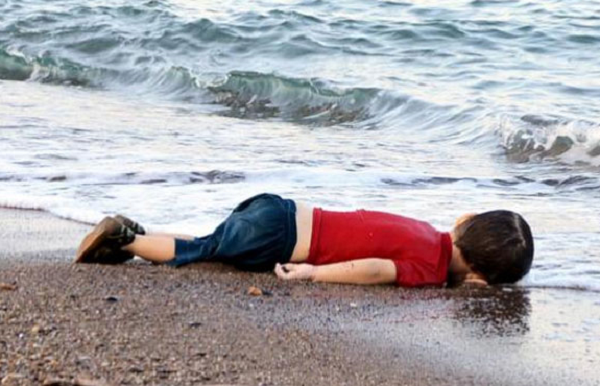 A small, lifeless body washes up on shore. The cameras are there as if they anticipated it. No one knows its actual origin, but the assumption is waiting, primed by news stories in the days before. That assumption fits within the Narrative that describes how we see ourselves and the world. Now the usual process begins. Our frustration needs an outlet, and we choose our vanity. When someone brings out an injured child, woman or kitten then the monkeys of the tribe will rage and fling feces, and then, as if by magic, a decision will be made.

This is how “we” — and risks are safest taken in groups — make choices. Our glorious Simian ancestry has us behaving no differently than the monkey-tribes of the jungle; when enough monkeys howl together, a decision must be made. This is the process of democracy, but it plays into a much older and darker part of our psyche. We are afraid to make decisions alone. We fear that the tribe will start shrieking at flinging feces at us if our decision is — well, not wrong, but looks like it is not right, or not from around here, not compliant with the Narrative. We have our ways and outsiders are not welcome.

Let us be honest and talk about the human tendency to herd. We form a herd when threatened; the entire troop circles up and readies itself to act as one. But when criticism becomes as threatening to us as predators are, mainly because we rely on others and their approval for our survival through the magic of specialized labor, we start to fall back on the panic response for everything. The problem is that a troop of monkeys howling is not substantially different from a committee of humans. And so committee-logic wins: each person says something different to appear unique and important, this amplifies complexity and distracts from mission, then the group shrugs and finds a compromise, using an emotional component to enforce unity and trigger action.

That dead little boy on the coast — who knows what he died of? the media frenzy will be over and forgotten by the time an autopsy comes in, if the medical examiner is not outright bribed — serves as that type of emotional trigger. The tribe will not start shrieking and howling and throwing you-know-what until the trigger appears. But now, we know how this process goes, and like a familiar dance, we must follow the steps. First, posturing; then, impossibility; finally, an easy emotionally-satisfying solution! The ethic of convenience wins the day as it always does. Whatever is easiest not as an act, but for our minds to grasp will take home the prize. This is why cat photos rule the internet, junk food dominates the landscape, and people vote every time for whatever spends other people’s money to make the voters feel good about themselves.

It’s a knee-jerk reaction: see dead child, feel bad, vote with money. The politicians depend on it. They know how human groups work. The few people thinking about the issue will be drowned out by a giant crowd full of individuals hoping to express themselves. To them, the reality of the situation — its origins and consequences — do not matter. What matters is their own feelings and sense of having done something important. When it comes time to make decisions, they always choose the mentally easier idea as long as it flatters them. In their minds, the world is a giant shopping mall, and politicians are selling them a product which they can return and complain about if it does not work. But the merchants here are crafty. They have created such a flood of products that very few people remember any one, and those immediately get shouted down by the rest of the herd trying to express themselves.

If you wonder why our politicians are so bad, stop wondering: you elected them. Not you personally, but you, by supporting the system of democracy which exists solely on the level of an ethic of convenience. When you endorse democracy by voting, you are giving your howl and feces-fling of approval to the idea that decisions should be made by whatever is easiest for the most people to emote about in a group. People usually laugh nervously at this point and say, “Well, when you put it that way — ” but no matter which way we put it, the underlying reality is the same. I can describe democracy as tomatoes or Superman, but what democracy is does not change. Only the thoughts in our head change, and by changing those thoughts, we can influence each other in denial of plain fact and circumstance. This is how democracy achieves consensus: all the monkeys howl together, and then they have an emotion, and they associate the howling with the emotion and approve a plan they do not understand nor intend to supervise.

After all, people view life personally. They are looking for what they can defend against the criticism of others while simultaneously using it to make themselves appear different, ironic, unique and iconoclastic. They want to stand out at first, but then go with the flow. That way they get all of the glory — look at me! I’m not like the rest! — and none of the accountability. In fact, that is the best thing about an election. The monkeys howl together, then the machines count the flung coproliths and everyone goes home disappointed. “The good guys lost this time, next year we’ll kick their asses. Good game, everyone.” They treat it like a baseball game, or a raffle at church, or how they will play bingo in the old age home when they win a stuffed donkey for making nine in a row diagonal. The game is not related to them. They can win or lose and still feel good about themselves. Afterwards they can go home and they have something to talk about for the next few weeks, either Our team was robbed! or Told you so! but never a criticism of the game itself. No one is to blame; it is just how the chips fell, like a lottery or roulette table. No one must change anything about what they are doing to fix the situation. This enables the solipsism of thinking exclusively about oneself, and as if the world rotated around oneself, especially when the issue is someone or something else.

That is what defines the ethic of convenience itself: do not expand your mind to reach the new thoughts, let the new thoughts come to you by putting themselves in familiar form. Of course, that limits what you can think — like forcing all music to be in the pentatonic scale — but it also eliminates risk, challenge, effort and responsibility for having to understand it correctly. It is pre-chewed cud. It is the harmonious sound of the other monkeys screaming alongside you. You fit in. And because it is so mentally easy, you do not take any risk within yourself either. You simply go through the motions, pretend to care, and then go back to thinking about yourself (my Christian readers will note that, through the lens of Milton especially, this defines Satan: self becomes more important than God, a hubris which requires rejecting reality itself; better to reign in hell than serve in heaven, and hell is people). The ethic of convenience means that you never step past where you are comfortable, and never do anything that will threaten your self-image and how you explain yourself to others. “See, I’m not like the rest because I’m the kinda guy who…” — all of it reduces to being simply marketing. Just of the personal kind.

When you put a group of these monkeys together, a certain type of decision emerges. It is a combination of the worst of conservatism, the “don’t rock the boat” and “keep the money flowing” habits that made generations of American girls hate their fathers, and the worst of liberalism, which insists that every person deserves fifteen minutes of fame funded by taxing the rich and consequently gutting the economy. The decision can go right or left, but it will be a variation of the same basic decision which we might call “The Democracy Pattern” or even the ethic of convenience itself. Groups choose whatever flatters them the most with the least risk to them individually, even if the group is put at risk. The group becomes understood as the self. Each person votes for what they think they can explain to their social group and make themselves look benevolent, and beyond that, they simply do not consider consequences. That is inconvenient. That threatens their egos, their carefully-constructed social personas, and because they have externalized their sense of values, their self-esteem. Fragile, they depend on this image to carry them through when things go wrong. Where previous generations depended on knowledge of what was right, God and trust in nature, people now depend on the I. And when the I fails them, they rationalize and justify and concoct excuses and find a way to argue that their losses were in fact their gains. This is the essence of both cuck and the self-promoting egomania of the yuppie or the reality television show contestant. It is the human disease.

At best, what you can hope to do is inch the system forward and give your team a win for this year. That is, unless you turned on the system itself. If any significant chunk of the population, say, 20%, started voting only for a candidate who went in to office not to win but to subvert, destroy and transition to another type of system, we could have a future. Without it, we have none. Until your vote is a vote against the system itself, you are signing your name to more of the same. And every time a sad child feels discriminated against, or an ethnic of convenience appears in time to justify the latest media agenda, you will find that everyone votes for idiocy. Europe accepts refugees, America accepts immigrants, or other travesties occur, but these are business as usual, and just one variant of the slow process of decline caused by democracy. You will not want to vote against democracy because democracy flatters you. “Yes, your vote counts!” — except that it does not, unless you are voting for stupid things like everyone else. The enemy is not the bankers, the rich, the poor, the Blacks, the Whites, the Jews™, or even the Other. Democracy is our enemy; the enemy is inside the gates, and has been here the whole time. Democracy converts normal people into a gushing, raging, sighing and emotional herd which cannot agree on anything except the simplest and most dramatic of gestures. The ethic of convenience wins out every goddamn time. Democracy is defeat.

It is time to demand an end to voting. With voting, every time an ethnic of convenience washes up on shore, the herd will gush and preen and the politicians will pounce like the parasites they are. Only removing the legitimacy of the herd defeats them. Crowds are not the way to make choices; they enable the manipulative, parasitic, criminal and corrupt class of politicians who have bungled the environment, immigration, economy, infrastructure, defense and every other issue. There is no escape until we can escape the manipulative system of democracy itself. This election, and every election, the only relevant question is Where do I vote to end democracy? Until we start thinking along those lines, we are just monkeys howling with the rest, hoping that our clod of feces will somehow change the vast inertia of solipsism welling up around us.

The Stanford Prison Experiment at the shopping mall | Reactionary Review