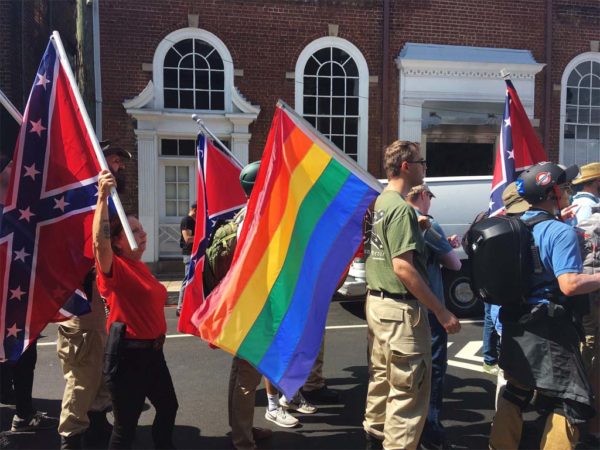 All of human history has played out through cycles: a truth is found, then people complain about how difficult it is, so they invent “truths” that explain why the truth is the opposite of the plain reality, and then everyone gradually goes insane as the anti-truths seep into every area of society, discourse and even the psychological makeup of individuals.

You might think that infiltration events of this nature are rare, but in fact, they are the norm, which is why every organization ultimately drifts Leftward, even when it tries to be Right-wing. When the raw material coming into an organization is indoctrinated in Leftism, they will simply arrange their Right-wing beliefs around that core, which forces all those beliefs to be re-interpreted in a Leftist context.

If everyone thinks the sky is green and the grass is blue, and you set up an organization dedicated to the principle of blue skies and green grass, then you will immediately suffer a flood of people who insist the sky is “green-blue” and the fields are “blue-green,” at which point it is an easy step to full subversion.

In the same way, American mainstream conservatives found themselves, over time, becoming dedicated to “equality” by spreading democracy and capitalism worldwide, and underground conservatives found themselves fighting for white ethnic equality instead of nationalism. They were subverted not by deliberate act, but by the entropy of individual bias as people coming into the groups re-made them into what people were indoctrinated to expect.

Few modern people think about the word, but inversion destroys all meaning. Inversion occurs when people start banning certain accurate ideas. This can be as simple as excluding them through social means, like saying that it is impolite to notice something or another. Inversion changes the definition of words to be their opposite, since something in the original meaning was taboo.

Right now, the Alt Right is under assault by people who want to re-make it as “American Nationalism,” despite the contradiction in terms that this phrase implies. They argue that by adopting the flag, we can further radicalize the Left into revealing itself as anti-American:

Over the past several months, as anti-White condemnation of Confederate monuments and memorials has spilled over to a hatred of all â€œold, dead, White guysâ€ in American history, we now see the Left equating Americanism with racism in the most vitriolic and bombastic fashion. The recent NFL controversy has attemptedâ€”and is succeedingâ€”in painting both the National Anthem and the American flag as naked symbols of White oppression over non-Whites and the systemic White racism inherent in all White-constructed systems. The Left is attempting to complete a final rout of the already gutted late American cultural form-world.

…We need to say that â€œyes,â€ America was founded as a racist country. We need to say, â€œyes,â€ the flag is a symbol of White conquest and murder. And as our enemies stare confused, we declare the fact that all peoples that have ever lived were just as ruthless. We must move the dialogue beyond moralism, beyond Christianity, beyond right and wrong, good and evil. We need to affirm the right of a people to fight for their existence, putting others under the boot or sword when necessary, as being as natural as a flower stretching towards the sunlight. We need to declare: I am a White American and my people built this countryâ€”now get out of my way!

…So, yes, letâ€™s join the liberals in calling America a racist White country. Letâ€™s concede that the American flag is a hate symbol and rally behind it. Letâ€™s be quick to point out to conservative normies whenever we can about just how brutal us Whites were to others, why we were right to do so, and why others will do it to us the moment we become a vulnerable minority. Nice guys always lose. Well, we arenâ€™t nice guys anymore, and we should brag about what bad boys we really were. And our ancestors really were the baddest, most brutal men the world has ever known.

So what could be wrong with this? It sounds strong, bold… visionary. It seems to turn the initiatives of the Left back onto them like captured cannon. It appears to give us a unique identity and goal. But it does none of those things.

Let us look at the many ways that this “American Nationalism” is totally wrong.

“American Nationalism” is a meme or trope instead of sensible policy. It sounds good to those who want an easy symbol to unite lots of people, but because it loses meaning in doing so, it defeats itself. Our real goal is the restoration of Western Civilization and since America is only part of that, America is a means to that end.

Keep the Alt Right. It is a good brand, and it has withstood many challenges. It stands for those who are both conservative and realist, which means that we embrace the roots of conservatism including traditionalism, monarchy, hierarchy, nationalism and social order. It is the only force that can challenge modernity, and that is what we need to escape this thoroughly stupid and evil age.