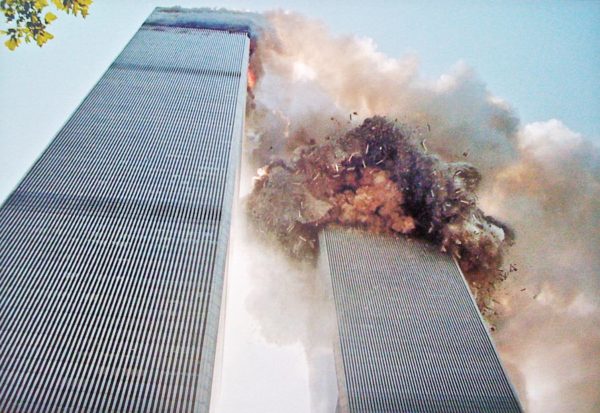 September 11, 2001, lingers in our memory as a significant date: the time when many realized that something had gone terribly wrong with the American experiment.

It was not that people were attacking us; that, by itself, is not news. It was that they succeeded, in part because of government ineptitude and in part because of the heavy camouflage that diversity and social disorder provide for those engaging in hostile activity.

9/11 was the perfect endcap to the 90s: the Soviets fell, and the 1968-style Leftists took over, bringing on a decade of increased pluralism and massive third-world immigration. In that background, a few aspiring terrorists are difficult to spot, even if government is functioning well, which it was not after a decade of liberal rule.

The 1990s were the end of unity and shared purpose as an American ideal. Under crazy molester Bill Clinton, the purpose of America became that of a giant shopping mall: cultureless, without shared moral standards, and held together only by our belief in our economy and the liberal aspects of our political system.

This shopping mall condition arose from Leftism itself. Leftists believe in the equality of all people, and so they demand abolishment of culture, heritage, class, caste, sex, race, religion and values. They want to replace those with the ideology of equality so it can gain world domination, which is the only point at which no competing systems exist which can reveal how much equality fails in practice.

America and the EU exported this system, called internationalism or globalism, to the world. Globalism is essentially market-supported Leftism that provides a stable ground for international corporations by eliminating any varieties in human beings. At first it seemed ideal, but then problems began to appear.

9/11 was the warning sign that this great post-war Leftist crusade was not working. Even in the third world, where presumably people would be excited about their inclusion at the table, resistance was high. Across the world people began to see the degenerate behavior of people in the West and realize that this was coming to their own countries. From this seed, terrorism exploded beyond its previous narrow focus.

But the damage was done. After Bush II exited stage left, the American electorate revealed itself to be in the throes of the illusions from the previous decade, and so it elected Barack Obama, its least qualified and most manipulative President ever. He violently reversed any sanity from the Bush years and replaced it with a more radical extension of the Clinton agenda.

Obama left America a ruin: racially divided more than ever before, cronyist both in government employment and corporate jobs, miserable in daily life, in the grips of currency that had lost value, and with social problems proliferating faster than they could be identified. He was the other half of the Clinton cycle: an economy based on a circular Ponzi scheme rooted in welfare and consumerism, and a strong ideological push to destroy the majority.

Fifteen years past 9/11, we see an America and EU which are devastated by their poor quality of government. Our elites seem entirely disconnected from the effects of their actions, and focus on saying the ideologically correct things so that their new voters — zombie SJWs, angry ethnics, alienated barren women and girly-men — will swing that voting lever despite the increasingly bad results. The fall of the West has reached Soviet proportions.

The only way to move back from this abyss is to take a different direction. With the world revolt against globalism, Leftism has also failed; with the corruption of the Constitution and European leaders like Angela Merkel who ignore the wishes of the electorate in order to keep advancing the ideological narrative through immigration, democracy has proven itself to be what its critics said it was, which was mob rule leading to tyranny.

The Alt Right posits a different direction. It wants both an immediate reversal of the post-1968 Leftist order, and a re-creation of the West so that it can be the greatness that was classical civilization. As Richard Spencer, one member of the team that created AlternativeRight.com back in 2008, says:

Spencer proposed the following “mantra” for his movement: “Race is real, race matters, and race is the foundation of identity.” The ultimate ideal is that the world be divided into ethno-states so that white people could have a “homeland.”

…He described his “dreamâ€¦ethno-state” as “a homeland for all Europeans,” which would take an “imperial form.”

…”If the alt-right were in power, we would all have arrived here via magnetic levitation trains,” he said. “We would have passed by great forests and beautiful images of blond women in a wheat field with their hands, running them through the wheat.” The audience tittered. “It would be a wonderful sight.”

Some of this was stated tongue-in-cheek, as if we dare not hope for a truly functional society. But modernity is hell at every level. The money is good, but the lifestyle is miserable, and people are increasingly dysfunctional as a result. Diversity and other Leftist programs are at the root of this dysfunction.

The rise of the Alt Right is the ultimate declaration of the end of postwar liberalism, including its virulent 1968 variety that took over in the 1990s when the hippie generation hit its forties and took over social institutions. It represents a changed goal: we no longer want the egalitarian civilization, but a wholesome and natural one. An ascendant one. One based on quality, not its opposite, equality and equal inclusion.

Our challenge is that most of us are coming from a Leftist time and so we tend to look for “Systems,” or structures of incentive/rules/rewards we can put into place that magically take care of social programs. Systems are a Leftist ideal based in the equality of the individual, therefore a need for rules and not more-than-equal people to control us.

The roadmap toward our ideal consists in first removing the blighted control mechanisms of Leftism, and second in re-constructing society around goals oriented toward culture and excellence instead of money and equality.

We know how to undo the damage. Remove immigration, civil rights laws, anti-discrimination laws, government regulations and any social programs, because those — like welfare, unions and benefits — represent a backdoor introduction of the basic concepts of socialism.

But after that, we must surge on to a different and more challenging task, which is how to make a society that lives up to our ideal. With the threats of diversity and Leftism banished, what would we create that might last for ten thousand years and rise as high as classical Western civilization, if not higher?

One possible seed can be found in this quote from William S. Burroughs:

Happiness is a byproduct of function, purpose, and conflict; those who seek happiness for itself seek victory without war…

The Enlightenmentâ„¢ reversed the classical model in which people strove to do what was good, and replaced it with individualism and equality, which are two parts of the same ideal. The individual wants to be above criticism, to feel equal to God and nature in that his command alone determines what is right, but this is toxic and leads to our present state.

The best hope for the Alt Right can be found in the ideal of reversing the precursor state to individualism, which is the idea that we can manipulate people with material means alone, and ignore our need for significance and meaning. But that reversal requires us to acknowledge that people are not only not equal, but very different, and that a hierarchy must exist which puts the best on top and gives them arbitrary authority to do not just what is pragmatic, but what achieves greatness.

Right now, the Alt Right hovers near disaster as a vast infusion of people with Leftist expectations arrives within the group. Those who favor socialism, government, democracy, bureaucracy, managerial states, and other methods of material manipulation are missing the point: all of that is from the bad old pre-Enlightenmentâ„¢ days and must go.

Modern society is hell and we want out. We must create a society that follows the eternal principles, or Traditions, which have made ascendant civilizations, and those begin in having motivations which are not merely reactions to material conditions, but a re-ordering of material to serve principle and ideals like “the good, the beautiful and the true.”

Without that, we will simply re-engage with the modern disease and re-create the hell we are trying to escape from. As it was for Western Civilization, 9/11 is a wake-up call to the Alt Right: if we do not correct the rot within, we will engage in a pathology that repeats the same mistakes, over and over again.