A Quiet Burial for the F-35 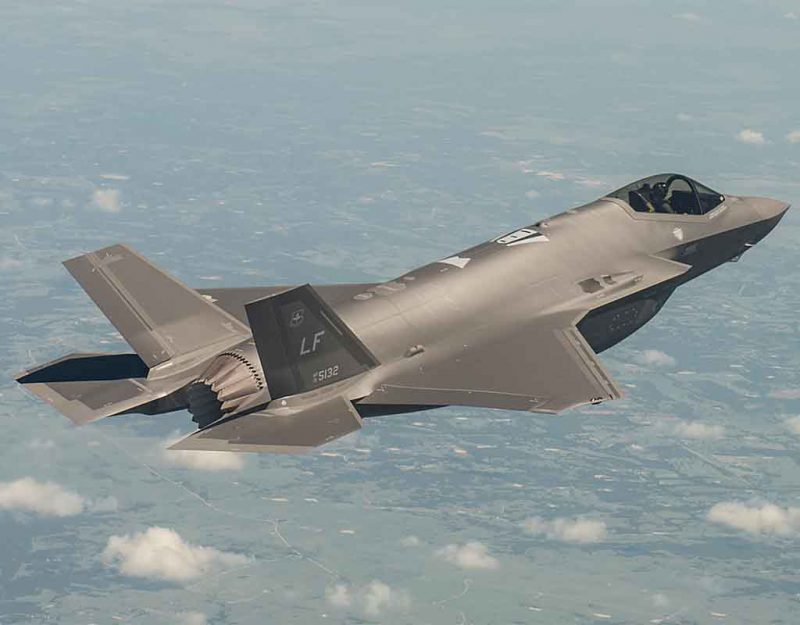 A major military weapon system can fail one of two ways: properly or improperly. A proper screw-up maintains tactical discipline and staggers off to a suitable place to die. An improper one blows up in your face.

The F-35 fighter plane has become a veritable stealth albatross:

Hermon electronic warfare surveillance station and Israeli PV-21 and PV-22 (Permanent Violation) surveillance sites also co located on MT. Herman Lebanon /Israeli Border just 35 miles from Damascus and at 9,000 feet indicatethat the Russians have modified some of their long-range radar surveillance sites located around Damascus to a new FM/CW mode “volume-metric” (long pulse cw-fm) radar detection system that defeats the F-35’s 45db reduction in radar cross section at X-Band frequencies. Thus, making the F-35’s stealth advantage almost obsolete with this type of radar. The recent shoot down of over 70% of the cruise
missiles attacking Damascus proves this to be true.

A Tomahawk cruise missile has on the average a radar cross section of about 1.5 meters and a f-15/16/18 on the average has a radar cross section varying from 7.5 to 35 meters depending on ordnance carried. Spectrum analysis of L thru X-band emitted radar signals coming from Damascus indicate that the Russians radar pulse repetition rate rapidly doped in PRR rate just before the attack. And the S-300 radar systems lit up in a newer Pulse FM CW mode not previously seen for that age of radar systems. This indicates that the Syrians got the new S-500 upgrade to their X-band Phased Array Radar target tracking system.

If this is the case, then it pretty much turns the F-35 into a really expensive piece of high tech junk. If the Russians follow on with this radar upgrade on their current Su-27 and Su-35 jets the F-35 won’t stand a chance in any combat where it is within 40 miles of a newer pulse FM cw radar system or any aircraft armed with it.

It had one claim to fame: a stealth plane that performed like a fighter and bomber at once. Now it has become obsolete before delivery, in addition to having been overcomplicated from the get-go. Nobody wants to logistically support it, nobody can maintain its multi-tentacled software, and nobody with a brain wants to fly it against the new generation of MIGs.

This highly-promoted weapon shows us a twenty-year odyssey in hyper-expensive, Research, Development, Test, and Evaluation (RDTE) failure. It died of paradoxical objectives: designed by committee, the blueprint version attempts to be multiple types of aircraft at the same time, and ends up filling no role well.

We get these puppies for $100M per copy. The Air Force wants to offload the whole dog-fighting mission that is currently in the F-35’s portfolio. Here’s the new poop from The Head Shed.

The U.S. Air Force’s top officer wants the service to develop an affordable, lightweight fighter to replace hundreds of Cold War-vintage F-16s and complement a small fleet of sophisticated — but costly and unreliable — stealth fighters. The result would be a high-low mix of expensive ‘fifth-generation’ F-22s and F-35s and inexpensive ‘fifth-generation-minus’ jets, explained Air Force Chief of Staff Gen. Charles Brown Jr.

This is farcical when we ponder what The Air Force originally wrote in the F-35 Operational Requirements Document.

If that plan sounds familiar, it’s because the Air Force a generation ago launched development of an affordable, lightweight fighter to replace hundreds of Cold War-vintage F-16s and complement a small future fleet of sophisticated — but costly and unreliable — stealth fighters.

The F-35 underwent a twenty-year accouchement that provided Lockheed Martin with a veritable gold mine of engineering and test hours. Every gadget that Lockmart could devise and perfect got slapped on the F-35. Its design process was to aeronautical RDTE what an Antoni Gaudi facade was to Art Deco architecture. Most people would want to live in a Gaudi about as much as US Air Force pilots want to charge off to war in an F-35.

To experienced industry observers, it resembles the AH-66 Commanche, the helicopter that had everything going for it until committee design killed it, too:

But as later occurred with the F-35, the Comanche incorporated so many brand-new technologies that developing, debugging and integrating nearly tripled development costs over time. For example, the helicopter came to be hundreds of pounds heavier than expected, resulting in post-facto weight-trimming and efforts to develop more powerful T800 turboshaft engines. The RAH-66’s software proved buggy, it sensors unreliable, and its radar absorbent materials susceptible to erosion when exposed to rain.

Furthermore, unlike the F-35, the Comanche was fulfilling a relatively niche support role in the Pentagon’s war machine. The RAH-66 procurement would have consumed roughly 40 percent of the Army’s annual aviation budget, even though transport and attack helicopters were higher priorities.

The F-35 may well be too big to fail like the Comanche did. It is also, apparently too big to buy 1,800 copies of. That’s $180 billion in procurement for one weapon system. That easily exceeds 20% of one bloated Pentagon budget. The obvious trade-off here is to buy five F-150 versions of this boondoggle instead of one gold-plated pachyderm. Do it quietly and continue to find something at least somewhat useful to do with the 200 or so F-35s that made it to field.

This is what happens when you design by committee:

Over the decades-long effort to meet a real military need for better aircraft, the F-35 program is the result of the merging or combination of several other separate and diverse projects into a set of requirements for an airplane that is trying to be everything to everybody.

For a fighter airplane, funding decisions become a balancing act of procuring not just the best aircraft possible, but enough of them to make an effective force. This has lead to the creation of so-called “multi-role” fighter aircraft, capable both in air-to-air combat and against ground targets. Where trade-offs have to happen, designers of most multi-role fighters emphasize aerial combat strength, reducing air-to-ground capabilities. With the F-35, it appears designers created an airplane that doesn’t do either mission exceptionally well. They have made the plane an inelegant jack-of-all-trades, but master of none – at great expense, both in the past and, apparently, well into the future.

Interestingly, however, one nation still loves the plane:

The Defense Ministry eventually plans to procure more F-35s as well as new helicopters to replace its aging Yasur squadrons. The government also said it will buy “advanced munitions, air defense systems, marine and ground platforms, cyber systems and more.” Israel makes most of its air defense systems in cooperation with the U.S., and the two countries recently announced joint development of the Arrow-4. Israel has already purchased 50 F-35 jets, most of which will be delivered by 2024 if the manufacturing challenges brought on by the coronavirus pandemic don’t slow down delivery.

Despite the many reported design problems, especially in liberal newspapers, the military plans to rely on the F-35 for future combat roles:

Some viewed Brown’s comments as confirmation that the service is abandoning the F-35, a plane that has taken nearly two decades to build and, although already seeing combat and being delivered to allies overseas, still faces developmental hurdles before the Pentagon considers it is fully combat ready.

Brown, when asked Thursday if the F-35 program is a failure, said that is “nowhere near” the case.

“The F-35 is a cornerstone of our [tactical aircraft] capability and for our fighter capability,” he said.

U.S. and allied F-35s have already seen combat. The U.S. military has deployed the stealth jets to Europe, the Asia-Pacific region and the Middle East.

The demise of the F-35 will cost trillions and sacrifice careers. Some people involved with this awful screw-up will be sent to “The Office by the River.” They will be sent to a nice office. They will probably have an attractive secretary and lots of nice potted plants around the spacious accommodation. However, it will be an office far from where any important decisions are made, a putting out to pasture for those who have failed.

These individuals will also never carry out another meaningful and important assignment during the remainder of their professional career. They, like the F-35, will remain an expensive but useless burden that has to be carried until it can quietly and unobtrusively put out to pasture. That will be the quiet burial of the F-35.