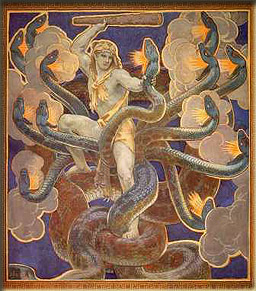 Ancient traditions show us cyclic history and reincarnated lives or alternatively, judgement from life before God, as each of us struggles onward to a superior state even though many of us will nonetheless fail.

Although each method takes a different path, in a broad sense both are in agreement with their conclusions.

Individuals are essentially vessels serving extrinsic ends whether for perpetuating their own dna or to breathe life into an ongoing culture they were born into.

Which distinct subspecies variant that neglected the former still exists? How many among history’s diverse civilizations that abandoned the latter are still around?

Individuals cannot primarily be an isolated end unto themselves. Nor can a Western hemisphere of two billion people, each heading off into two billion random, often conflicting directions continue because this enterprise will rapidly disintigrate as an inclusive and tolerant yet failing modern world has shown us all.

Universals do not exist | Interview with Daryl Davis, author of “Klan-Destine Relationships”