The Tyranny of Liberalism by James Kalb 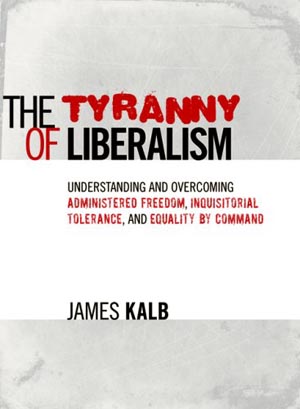 As the radical gulf between left and right increases, our media likes to assault us with a “there’s no real difference between the parties” meme. James Kalb sets this situation to rights by attempting to, with Nietzschean thoroughness, identify the root of liberalism as it differs from conservatism.

The subtitle suggests the formidable answers he encountered. Liberalism is the philosophy of those who think they can create effects directly as causes, as if ordering a butler to make the following changes to their experience of the world. This and Kalb hints at a darker underlying truth: liberalism may be a large support group for those who are unaware of anything in the world but themselves.

In Kalb’s view, this support group creates an ideology that supplants reality. Bolstered by big media, who are busily capitalizing on its popularity, this ideology becomes the groundwork of the tokens exchanged between elites. As this happens, the population as a whole drift further from reality, making (he hints) a Soviet-style collapse possible.

He writes in a fluid, mostly unadorned prose that bubbles from within with sporadic elegance, writing for clarity in detail first and secondarily to be “liked”; Kalb is fortunate in assuming that his audience, having sought him out, will stay to the end. This is somewhat obviously not a book for your mainstream politics reader as a result, but it will find favor in those of us who are academically, legally or politically inclined.

The Tyranny of Liberalism is structured as a lengthy linear argument that circles around itself to flesh out a breadth of details, like water eddying around oars propelling a boat across a lake. Kalb very sensibly summarizes his approach in the first chapter, then defines the ideology of liberalism, then shows its varying effects. He does so in detail, with frequent insights that achieve the vertigo effect of zooming rapidly over conceptual space to reach a clarity on a specific term, issue or event.

It is a pleasure to read, mainly because he uses language like a draftsman, putting each concept exactly where he needs it. If he were to drop a level of detail and write more engagingly, this book would be a bestseller. As it is, it suits the more technical mindset of those who want to know exactly how and why things are as they are. Although no page is wasted, the book wanders and becomes redundant in the second half, but not to a great degree; Kalb would benefit from an English language specialist editing this to drop the extra hundred pages and achieve the same radiant level of insight on every page.

The form of the book pales in comparison to the content. Unlike others who assume a political viewpoint or meta-political viewpoint, Kalb discusses liberalism as a psychology and a phenomenon; this is the curious scientist trying to match up types of mental notions to the behaviors they produce. An uncannily accurate diagnostician, Kalb slices deeply through the layers of social pretense clouding our time:

The more the present order destroys coherent raditions of life the more it destroys its own future. If current understandings of reason are too narrow for our needs then others will develop. The best hope is that evident inadequacies and antistatist trends will limit reliance on the advanced liberalism that now dominates public life and that they will allow it to weaken as its deficiencies become more obvious, so that liberal society can transform itself into something fundamentally different. Suppressed traditions may find their voice and reassert themselves, sustaining principles may sprout and take root. A comparatively smooth transition to something better is possible, and we should do what we can to promote it. (287)

Even more important is the new direction taken: instead of viewing liberalism as a political concern, or a sociological one, viewing it as a psychological one; in other words, accepting that psychologies are not equal and not all are motivated by the same desires. Unlike any other writer, Kalb cuts through the fog of layers of explanation and shows us the raw power struggle underneath.

Recent moral progress is an illusion. What has happened, in effect, is that fairness and decency have been turned into nationalized industries. Instead of people having to treat each other decently, each does what he wishes and society at large is expected to supply the decency. (119)

The Tyranny of Liberalism explains liberalism as a type of social compromise made by selfish individuals to avoid the consequences of behavior and the social standards that make such consequences possible. The administrative state, Soviet-style tolerance dogma, and forced equality are tools of convenience in a collaboration between industry and the selfish individual, in Kalb’s view.

Educated and well-placed men today see rejection of a technological approach to human life as ignorant or disingenuous, and in any case dangerous. For them, assertion of limits on man’s power in favor of principles transcending desire can only be obfuscation…Traditional morality, which makes some desires superior to others, is thus understood as a devious effort to control others and becomes a stock example of immorality. (26)

The dichotomy thus established proves itself right time and again: the individuals who are selfish and therefore want no limits on themselves, thus demand an anarchistic order with a powerful Nanny State to keep it together, opposed to those who want a cooperative organic order like culture, religion or values. The demi-anarchistic impulse at the core of liberalism has never been shown in such revealing detail.