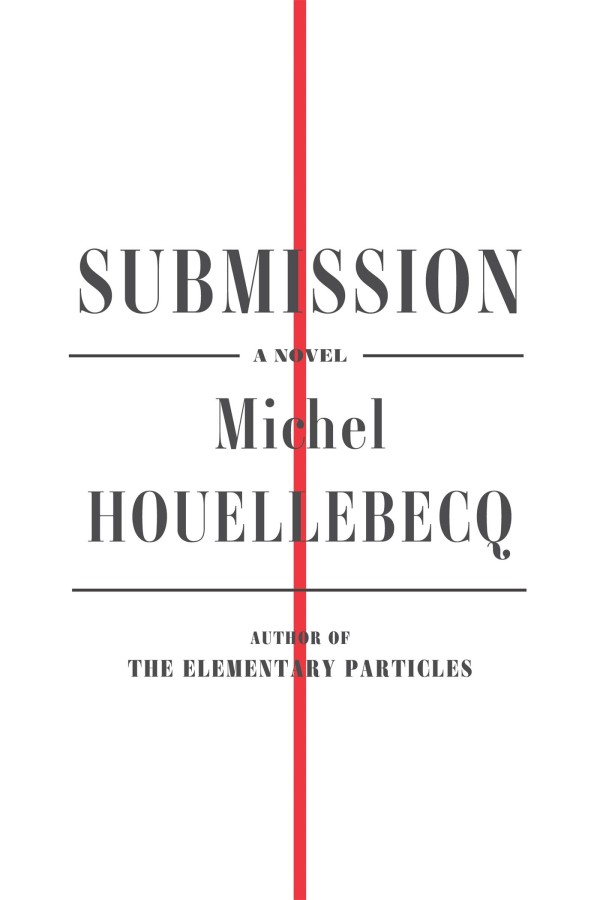 In theory, Submission centers around the takeover of France by Islam through the democratic process. Peeling a layer deeper, it contrasts the principles that make Islam successful with the comparatively self-destructive principles of the West. At its core, it addresses the question of whether we in the West can believe in anything, including both God and ourselves.

The plot follows a middle-aged professor in France in the weeks leading over to an Islamic takeover of the country. His life is a modern tale of lust, excess and a striking lack of fulfillment. As a result, he serves as the perfect Houellebecian protagonist: constantly stunned, always on the periphery, and going through the motions of ordinary life from a simple lack of any idea otherwise.

In the process, the protagonist uncovers a secret identity of Islam as a new imperial power, and the West as dying from its rejection of biologically-realistic policies in favor of neurotically-obsessive intent policing in order to uphold its obviously miserable and failing egalitarian order.

“Rare are the builders of empire,” Rediger mused. “It is a difficult thing to hold nations together, when they’re separated by religion and language, and to unite them in a common political project. Aside from the Roman Empire, only the Ottomans really managed it on a smaller scale. Napoleon could have done it. His handling of the Israelite question was remarkable, and during his Egyptian expedition he showed that he could deal with Islam, too.” (237-38)

Like many of the best books from Houellebecq, this latest tome searches for causes beneath the obvious political, social and managerial dysfunction. His interest is not what is going wrong, but why it is going wrong, and he spins it in Submission through a parallel plot that compares the existential despair of an academic, the migration from naturalism to religious conversion of writer J.K. Huysmans a century before.

This book does not suggest answers, but attempts to correctly identify its parts and leaves us with the resulting questions. Would we want to live under Napoleonic rule, or the Ottoman Empire, and are we falling like Rome? The hint given is that Islam is simultaneously successful because of its Machiavellian focus on power and practicality, and itself heading into the doom that awaited all of those empires.

Only religion, the article tried to show, could create a total relationship between individuals. Think of an X-Y graph, Rediger, wrote, with individuals (points) linked according to their personal relationships: it is impossible to construct a graph in which each individual is linked to every other. The only solution is to create a higher plane, containing one point called God, to which all of the individuals can be linked — and linked to one another, through this intermediary. (224)

Much as with the sense of empire, Houellebecq’s protagonist FranÃ§oise finds himself uninspired by religion. He tries, repeatedly, to induce in himself the Catholicism that has guided France in the past and delighted his hero Huysmans, but instead finds himself missing the step before that step, which is the will to believe.

The above cited article purports to represent the thinking of Réné Guénon, and points to the split between European and Muslim consciousness silhouetted in this book: Muslim consciousness is practical, where the European needs an inner animating spirit toward the transcendental in order to enjoy life. FranÃ§oise is a case in point; he survives by practicality, but finds himself wishing he were dead.

The story follows Francois in his middle age as he lives a rootless life: teaching easy classes to nihilistically bored and career-minded students, having a series of sexual relationships with students, and in the distinctive style of Houellebecq, purchasing and analyzing consumer goods including exotic TV dinners and YouPorn. His life is complete and yet empty in a way he cannot articulate but reveals to us, the readers hovering over the details of his existence, through his actions and most importantly, his lack of genuine affect in response to what should be emotional events like the loss of a lover or job.

Houellebecq has developed a style all of his own; one might call it “reciprocalism” because it takes the big issue in any situation and contrasts it with the small issue, which appears larger because it is more immediate. For example, whether France is falling to revolution or not, dinner must be made; the health insurance must be paid; the car needs gas and the career needs advancing. Through this, the author shows us how modernity inverts all motivations to be mere reactions to impositions on material convenience, using humor and bittersweet sardonicism together.

“And I don’t guess you’re really an atheist, either. True atheists are rare.”

“You think? On the contrary, I’d have said that most people in the Western world are atheists.”

“Only on the surface, it seems to me. The only true atheists I’ve ever met were people in revolt. It wasn’t enough for them to coldly deny the existence of God — they had to refuse it, like Bakunin: ‘Even if God existed, it would be necessary to abolish him.’ They were atheists like Kirilov in The Possessed. They rejected God because they wanted to put man in his place. They were humanists, with lofty ideas about human liberty, human dignity. I don’t suppose you recognize yourself in this description.”

No, in fact, I didn’t; even the word humanism made me wantt o vomit, but that might have been the canapés. I’d overdone it on the canapés. I took another glass of the Meursalt to settle my stomach. (204)

Through his struggles to adopt Catholicism, the protagonist discovers a truth uncovered by Immanuel Kant: since every effect has a cause, if one desires to be religious, one must first have the intent and openness to it. This serves as an analogy to the West, which appears unwilling to desire to save itself, and instead finds itself lapsing back into pragmatism including physical comfort, which includes the lusts, alcohol use and luxury TV dinners that FranÃ§oise uses to fill the void.

Submission ranks as one of the greatest books of the modern era. Like Elementary Particles, an earlier work by Houellebecq, it raises the question of how a civilization resurrects itself, and identifies the question as lodged within the human soul. When people want excellence, and the good and beautiful and true, they can choose methods or interpretations of that such as religion, but absent that, they remain indecisive.

In the case of FranÃ§oise, the question becomes one of how to deny pragmatism and the popular notions of what is convenient in order to elect to rise to a higher plane. The Muslim takeover of France occurs through democracy and is encouraged by government and citizens alike; the people are inert, following the parameters of their jobs, but not the demands of civilization. And so it posits to the West a question: do we want to not just survive, but live?