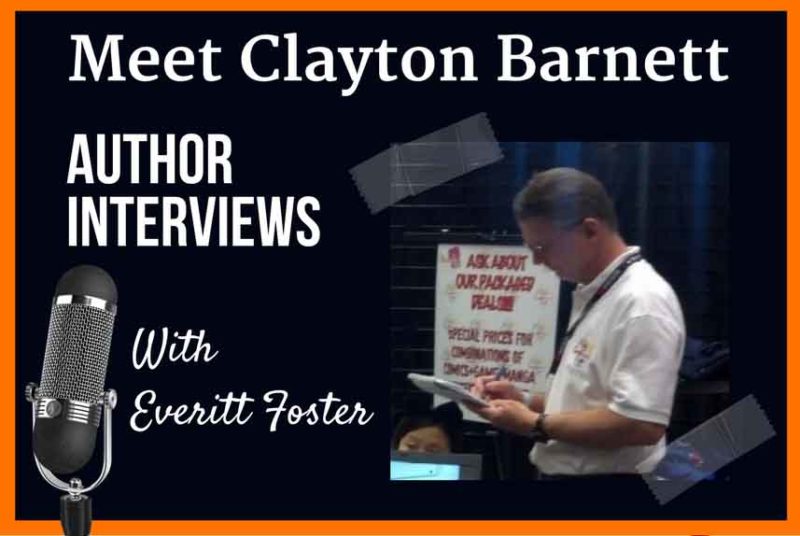 1. Tell us a little about yourself, where are you from, where did you learn a love of writing, what books influenced you most as a young man?
Born in Texas, raised in the Mountain West, currently trapped in central Ohio– only for a few more years!

Love of writing? Prior to four years ago, besides memos and reports, I’d not written a thing in my life. Then, one lazy August evening, I texted a friend: ‘We should make a visual novel.’ ‘Sure. What’s a visual novel?’ That became the 80k-word OTChi Kocchi. The following November someone introduced me to NaNoWriMo. In less than two months, I’d published my first traditional novel. In the Spring, its sequel. Later, a children’s early reader. A free web-novel. Currently, a horror story. It’s not a “love,” per se, but rather an almost childlike enthusiasm to share the stories that keep coming into my head. Aside: my wife says I’m much less of an asshole when I’m writing; there’s a compliment in there, somewhere.

As a young man I read almost nothing else but SF: Niven and Pournelle far and away more than any other, with a sprinkling of Foster, Heinlein, Saberhagen, and Zelazny. In my late 20’s, when I converted to Christianity, I came to adore Lewis’ Space Trilogy: I’ve a screenplay for ‘Out of the Silent Planet’ around somewhere and there are echoes of the N.I.C.E. of ‘That Hideous Strength’ in my current work’s Neuroi Corporation.

Through my 30’s, Colleen McCullough’s Masters of Rome series dominated. I can quote tracts from those things!

2. You wrote Uprising Review’s first horror story. What is it like to write horror as opposed to other genres? And is it hard to transfer skills of one type of writing to a totally different genre?

Having the advantage of working in a future history, Machine Civilization, that I’m still creating, has freed me to experiment with different genres. ‘Accursed Heart’ was a flash-fiction appearing in my head by looking at a single drawing. Prior to that, nothing I’d written was close to horror; in fact, I freely admit that when I first got “into the gory stuff” with my soon to be release novel, ‘Cursed Hearts,’ it was awful: rather than a sense of fear and dread, it read like an autopsy report. A friend of mine was kind enough to critique it and suggest I go in a direction I’d never thought of: good horror works when the reader puts themselves into the situation; so, generally, I tried to tell those parts of the story from the victim’s perspective.

I’m pleased that I’ve added to my skill-set, but don’t think I’ll be seeing something like this again. It’s– unpleasant. Perhaps that political/espionage idea that’s been drifting about my mind–

What is the market like right now for horror? We hear a lot about Science Fiction and Fantasy but Horror seems to be a neglected step brother at least from what I can tell.
I think it’s a natural fit, really: people get off on the idea that something horrible out there is going to eat them. The zombie apocalypse is just medical malpractice with the trial lawyers being eaten first. The ‘Aliens’ franchise. What is Maya in Cursed Hearts — draining life through physical contact — if not a ‘vampire?’

As to why audiences want to be eaten– well, let’s leave that for the Comments section–.

3. Did you train formally as a writer, or did you take another route to the same destination?

Not at all. Going back to the memos and reports from Question 1, I always knew I was pretty good at slinging words together, but my professional background was in engineering and now in pharmacy. I think it was my decades of voracious reading — hundreds of books per year — that taught me to recognize what good writing should look like.

4. What do you think of the politicization of everything including entertainment? It seems as if you either have a certain agenda according to the industry, or you’re not worth talking too and your book isn’t worth reading. Is that something you’ve experienced?

It’s horrible; Progs and SJWs want to turn every moment of everyone’s lives into a high school student council meeting. In Soviet Russia.

There are writers and books that are just awful, but because they toe the line and stay on-Narrative, they are promoted by the dinosaur publishers. As I’ve said in my talks about creative writing and self-publishing, we live in an age of miracles: you have a story to share? There’s nothing, not even money, standing in your way to make it available to the masses. Yes: marketing and agents and all that, sure, but if I could have a book for sale on Amazon in seven weeks and for three dollars, why the hell not?

To-date, I’ve experience no push-back. However, as my reputation grows, I expect that to change. I thought about that years ago, with our visual novel, but decided I would stand behind every word I write, to the extent of writing under my own name.

5. What is the difference between genres like horror and a thriller? Is it just about the amount of blood and gore, is it about monsters?

Although one can experience a good or bad ‘thrill,’ I’m unaware of a ‘positive horror’! I would think a thriller is more about mood and setting– did that stuffed dog just blink? Whereas horror does imply violence, even if it “off camera.”

6. Do you have a writing philosophy or a process? Tell us what your writing process is like and do you think it is a good idea for a writer to develop a routine to help them stay focused?

“Write drunk; edit sober,” as Hemmingway said. Sometimes I use both: bourbon in my coffee has yielded wonders! All of my stories, so far, have been triggered by a single image. That image allows me to ‘see’ a part of a story. I take my time, and another drink, while listening to music, and wait for the scene to play out in my mind. Once it has, I just write it down. I’ve made the analogy that I’m sitting in a movie theater with a laptop, transcribing what I see; I don’t come up with all of this! That’s impossible!

I commented once on my blog, after a particularly long dry spell with Cursed Hearts, that I’ve never had writer’s block: not once. Why I do have is Writer’s Fear: fear that I’ll sit down, fingers poised, and see nothing! There was a ten-day period when I wouldn’t walk into the Dining Room where Nichole5, my writing laptop, is, out of fear. When I finally did — after taking an extra Metoprolol for my hypertension — I knocked out about 8500 words. So it’s never a question of focus, but self-doubt.

7. Have you been influenced by pop culture, such as movies and video games? And if so what do you think is the emerging relationship between books and the rest of the entertainment industry?

“Pop culture is filth.” — John Derbyshire. I’ve not been to a theater in a dozen years and the last game I played was Civ IV, just as long ago, so, no.

Now, have I been influenced by some other culture–? [Allows eyes to drift up and about, looking at the dozens of anime wall hangings and figurines he and his wife have purchased. Glances at Gallery on his phone to all the photos of his whole family cosplaying together at animecons] Maybe? A little?

There is no relation between the emergence of Self- and Indie-publishers and walking-dead industries such as Hollywood. Making live-action movies in the 2nd World gets cheaper every day. Making CGI and animated movies, as more and more is fobbed off onto expert systems, too. Even what little time is left to me, barring imprisonment by SJWs or being blown up by islamists, I expect to see thousands of such works. Not on YouTube. Probably Gab.

8. There is something a lot of authors and new celebs deal with called “imposter syndrome.” What do you make of that phenomenon? Why do you think people are so insecure they won’t even look at their own books, even for revision or editorial process?

Honestly, that’s the first time I’ve ever encountered that term. I laughed, having looked it up. My comment?

If you cannot be proud of your own work, you’re in the wrong tanjed business.
“False modesty is the refuge of the incompetent.”
Way back in my design engineer days, I recall seeing TV commercials with products I created. I’ve a US Patent. Why in the world would I think, “oh, that’s really not me–“? That’s not a different way of thinking, but an alien one! That the path of the virtue-signaling beta-cuck. Me? I helped revolutionize the bedding industry with my designs. Now, I’m going to change the world with my stories.

It appears that WesternCiv is dying. I did not rescue two orphan girls from China to have them wear burkas and chant diversity mantras working as baristas. Politics is far downstream from Culture, and I am going to stand up, fight, and re-make our culture. One awesome story at a time.