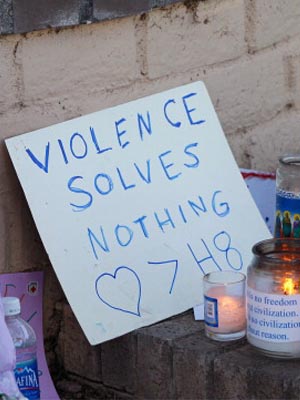 For many parts of modern life, that assessment is true. People are not stupid; they’re caught up in something else, looking in the wrong places for answers they’ll need. Often, they are simply distracted by their own tasks (like growing up or growing old) or inner emotional turmoil.

The hardened slap of the forehead when reading news items is familiar to any of you who follow political news. You see news articles covering a situation, the debate over the response, and finally the consequences of the response accompanied by outrage, confusion and denial. It’s hard not to break your own skull slapping your forehead at Mach 3.

How could these people not know this was what would happen? You stare at the article — newspaper, web, Kindle, smoke signals — and ponder. It seems that a basic understanding of “the world around us” would preclude ideas such as the one that you are reading was not only extensively debated, expensively researched and painstakingly implemented, but also a multibillion dollar failure.

That’s just wishful thinking. Often you come across one of those “kumbaya” style articles, where the people involved seemed to be caught in a dream where every human is a good person hiding inside a rough exterior. Either that, or it’s the polar opposite, a paranoiac rant about how all but a few are wrong, bad and vile.

They sure dumbed that one down fast. It’s like watching a salesman work: slowly strip away context, consequences beyond the next ten minutes, and any mention of cost, and instead fill your mark’s head with pleasant images of what the product will do for them right now. They dumb down a complex situation to a simple desire.

It’s no wonder the results are bad. No one is thinking of the consequences of their actions, not deliberately, but as a product of thinking of nothing but themselves and their desires. No wonder these people are fodder for any slick-tongued conniver who is savvy enough to hide his bad intentions behind altruistic statements. Think of the children! Everyone can take part now! And it’s all free!

Conservatives believe that the federal government should have limited powers and thatâ€”beyond providing for the common defense and enforcing contractsâ€” government should stay out of economic affairs as much as possible. Conservatives believe most federal spending is suspect and should be cut if it has not proven to be effective (such as on programs like COPS, FEMA fire grants, and Head Start). Progressives, on the other hand, see the federal government as a giant jobs program so that any cut to any federal program, no matter how ineffective or wasteful, would be a harm to the economy. – Heritage.org

Liberals, progressives and leftists — those terms mean the same thing in slightly different degrees, just like the terms Socialist, Communist, Anarchist and Democrat — do not want to see the results of their actions. They are geared toward the individual, and through that, toward socially correct actions that make other people feel good. They just don’t consider the consequences.

In the leftist worldview, making people happy means that society is happy which means that somehow, magically, it will be profitable. And even if it’s not profitable, isn’t our feeling good more important than money which is the root of all evil? There are better things in life, like feelings and getting along with others — so they say.

But the problem is that it doesn’t work. Our economy is like a big pyramid, and if you hand out money at the bottom, it goes no farther. Hand it out at the top, and it gets distributed all the way down the pyramid. Another metaphor: you can either eat the seed corn, or give it to the richest farmer you can find, because then he or she will find a way to grow the most corn (the richest farmer is by definition a productive one).

The left doesn’t like that, so they keep creating unrealistic policies and blaming other people when they don’t work. This is why the left labors under the assumption that oppressors lurk under every bed, Hitlers in every mansion, racists behind every badge or red pencil, and so on. They need an enemy on which to blame their failures, since their irrational policies always fail and leave a trail of destruction behind them.

Here it is in the wild:

Calling for stricter enforcement of existing laws, House Republicans said Tuesday the nationâ€™s broken immigration system is making it more difficult for minorities to land jobs because they are competing with illegals willing to work longer hours for less pay.

Democrats, though, countered that the GOP was using immigration to pit blacks against Hispanics while ignoring the â€œrealâ€ problems in minority communities, including the lack of education and job-training resources, that drive unemployment. – Washington Times

Liberal policy has always been to fight against whatever top dog they can find, and that includes an ethnic majority. Even more, it’s convenient for liberals to pay Mexican illegals $5/hour to mow their lawns, and then pat them on the head and talk about how equal they are (probably for an hour, cutting them out of another $5). Virtual slavery is OK as long as we mean well, and it means our lawns get cut cheaply in the lily-white suburbs we moved to, all while talking about how important diversity and class warfare were.

Then we have this brilliant bit of liberal dissimulation:

If the Wisconsin governor and state legislature were to be honest, they would correctly frame this issue. They are not, in fact, asking state employees to make a larger contribution to their pension and benefits programs as that would not be possible- the employees are already paying 100% of the contributions.

What they are actually asking is that the employees take a pay cut. – Forbes

Except that, as the author shamefacedly admits further in the article:

while it is true that it is state employeesâ€™ own money that funds the pension plan, when the pension plan comes up short it is up to the taxpayer to make up the difference.

This whole debate is about the fact that local governments are going bankrupt because they’re supporting pension plans, and this liberal author conveniently ignored that fact. What is he, mentally challenged? A criminal, a liar? Probably some intersection of those three categories.

Voters act like morons because they listen to people who flatter them, like liberals, or people who profit from their ignorance, like the cynical oligarchs who run the entertainment industry. Voters take a policy that will be in place for a century and distill it into what they’re feeling or reading in the thirty minutes before a vote.

This is a disaster, and it explains why over time democracies create liberalism to gather all these useful idiots together, drive them toward insane goals, and then profit from their failures. The cynical manipulators among us encourage people to be oblivious, to do only what’s convenient and to live on the sofa eating fast food and watching cable TV.

Sadly, that is the fact liberals will never face in their quest for greater “freedom” and “democracy.” Our insistence on these things is what makes us as a society oblivious. We domesticate ourselves with convenient lies, manipulate each other, and then politely ignore the consequences. It’s no surprise so many of our policies fail as if we were completely ignorant of reality.

The power of victimhood | Wasted Years