Wealth and the debt culture 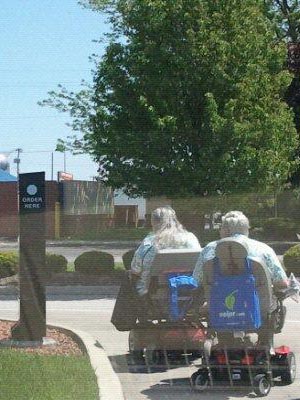 People with wealth are blamed for our problems because many middle class, and certainly most poor, cannot imagine how wealth is accumulated. It’s not about how much Steve Jobs took home in a year, it’s how much wealth he had accumulated via his life’s work – that is to say, Apple and his other investments.

Sadly, the answer is literally in the palms of those who don’t understand it. Cradling an iPhone or typing on a Windows-powered laptop, people who blame the wealthy for the world’s problems lack the intelligence to come to the following conclusions:

So people buy the products, venture capital money continues to roll in, more ideas are funded, and more people buy. Credit becomes easy to find even among the low income crowd, until there’s a glut of new stuff, and a glut of people willing to part with money they don’t have to buy the stuff.

Does this sound like a sustainable model of consumption?

Who is to blame for it? Is it the greedy venture capitalist who did the market research and parted with a few million dollars to fund an idea with plenty of risk involved? Is it the government for flooding our banks with cash and insisting that banks give it out at low interest rates?

Look in the mirror for the answer.

It’s you, dear consumer. It’s true that government, media, and large corporations in our increasingly soulless society don’t make it easier for you. But many people become wealthy not through sleazy, illegal methods, but by having the discipline to forfeit the desires of today for the long term goals of tomorrow.

Even upper middle class folks who own small businesses and devote long hours to ensuring they succeed have to give up valuable family time, gifts for their kids, and short term investments. These people are mostly honest, hard-working, and have no designs of expanding their business beyond their town.

And what do you see when they succeed? Usually they give back to the community in some way, even if it’s just sponsoring baseball uniforms for Little League.

And so it goes with the wealthy: those with wealth, who can continue to generate wealth simply by investing a good chunk of cash in safe, low-interest bearing accounts, will continue to give the lion’s share of any charity at home or abroad.

What do consumers do, by comparison? Spend. They have no wealth, and many can barely be considered affluent just in terms of household income, yet as soon a a little money comes their way, they spend it. On their homes, on themselves, on vacations, on televisions, on gizmos.

Eventually, you look at the mail and realize those eight retail cards you opened will spike in interest if you don’t pay them off soon. Spending has to curb temporarily; you can’t afford the iPad, home theater system, and the Disney trip. Choices have to be made. And not the fun choices, like Starbucks or Dunkin Donuts for breakfast.

Instead of holding people responsible for their debts or fixing the system so it doesn’t happen again, we keep the boom and bust debt cycle going – despite the fact that most people probably should never have had access to the type of funds requiring better decision-making capabilities.

When millions of people are allowed to put themselves in this position all at once, suddenly the house of cards, comprised of easy credit and a fragile banking system, falls. But as long as more wealthy are around to help pick up the pieces and save us from ourselves, then continue the venture capital game, the cycle continues.

99% of problems committed by 1% | The Prole Wars: the closing