The Prole Wars: the closing 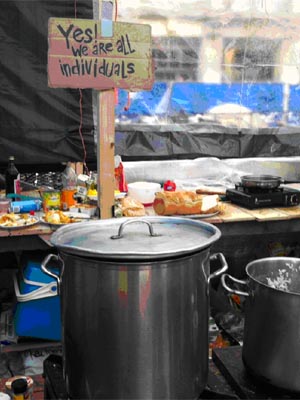 This is the third part of my experience when visiting the demonstrationsÂ about the financial crisis.

In the second episode of these reviews I pointed out to the protesters that they lacked unity, order and cohesion. They did not have a singular message to convey, but instead their protest was made up from a collection of islands founded upon private opinions. I remarked that because of this they formed yet another bubble encapsulated within society. They couldnâ€™t possibly challenge the order, because by embracing the spot they were given to demonstrate, they had already made themselves irrelevant. Even though they claimed that spot in front of the stock market for themselves, they couldnâ€™t threaten the order â€“ because they are nothing more than another format to voice a private opinion.

The order has defined itself so that whoever wishes to criticize that order, gets a space to do it. The governors who allow those protesters to camp there, understand it. The politicians who wish them removed, do not understand it.

Relativism has triumphed over everything, and every statement is a priori understood as the utterance of a private preference. A2 + B2 = C2 ? Thatâ€™s just Pythagorasâ€™ opinion.

â€œWeâ€™re very proud of this demonstration,â€ one of the protesters said to me, â€œweâ€™ve been here for days, but not a single window of the stock market building has been smashed . . . You see if someone would demolish a window by throwing a stone, then the police would have a reason to get us out of here. They will bulldozer this place, and our stands will be gone. So weâ€™re not giving them any reason to remove us. We value freedom of opinion and our conduct is entirely peaceful.â€

One of the corners of my mouth involuntarily curled up as I heard it â€“ I understood.

â€œThey,â€ I responded, â€œdonâ€™t care about your reasons for being here. It is of no concern to them whether youâ€™re right or wrong or how noble the cause of your protest is. They think in operationals. If you would demolish a window, you would be labeled as a source of instability, as a cause of deconstruction to society. Thatâ€™s why you would be removed. Not because you are speaking dismissively of The ManÂ â€“ not because you lay bareÂ the insidiousness of their practices, as you so proudly like to think. The moral grounds of your presence are irrelevant to The System.â€

â€œTo The System,â€ I continued, â€œyou resemble nothing more than an operational. The reason they are not driving you out of here, is because if they would, it would be perceived by the general public as beating down innocent civilians merely making use of their freedom of speech. That perception would create civil unrest and antagonism against The State. And remember! The State does everything that it does with the eye towards social stability. However if your group would break a window, then you would be perceived as the cause of social unrest, and thus you would be removed.â€

I decided to discuss the impressions I gained from the protest with my friend, as he invited me to a local fastfood restaurant. Once we took a seat he noticed a sign on the wall, that read:

The manager can send you away. With or without reason.

â€œAh,â€ he said, â€œso we are in fact present in a dictatorship right now.â€

â€œYes,â€ I replied, â€œin essence, we are. However, there is supposed a Hobbesian primordial point of freedom in which we found ourselves before entering this restaurant. A primordial point of freedom from which we decided to enter this restaurant, and to make use of this service, of this product we purchased. The possibility to be randomly sent away, is part of this product. Thatâ€™s how our legal system would reason.â€

â€œWell, if you envision that freedom so absolute, in such a pure and impermeable way, then you are pretty much ignoring basic conditions.â€ my friend said: â€œAn impenetrable sphere of original freedom from which a choice was made â€“ a point where no community existed, and no bodily needs such as hunger or thirst. It thinks the individual human as a separate entity from the community, whereas the human being finds his fulfillment by being part of a community.”

â€œHmhm,â€ I commented, â€œwe never find ourselves within an impervious sheet of freedom from which we choose. We always find ourselves within starting conditions. And from those starting conditions we reason what conduct is most likely to provide us with success. The clearer we see that path, from starting conditions to success, the better we understand causality, and thus the more free we are. But thatâ€™s something entirely different as thinking weâ€™re free because we entered into an imaginary contract with society surrounding us â€“ that sort of thinking renders all bonds between individuals into more or less calculated deals for temporary mutual pleasure, contact that for that reason feels ultimately hollow and empty.â€Â

This way I saw two poles draw themselves out. The first pole is absolute freedom, the kind of imaginary freedom just described. Itâ€™s essentially despotism guised by the clause of oneâ€™s own consent. The second pole is altruism, to help others first and only later check what you get out of it for yourself. The kind of attitude that is friendly to all.

â€œI know a good example of this second pole.â€ my friend said, â€œIt is a group of people who are unemployed and get a welfare cheque. However they are idle, and The State has to pay them. â€˜Therefore,â€™ The State reasoned, â€˜they are going to have to do labor, for a tiny bit of extra money on top of that welfare amount.â€™ Because if they didnâ€™t get that tiny bit of extra money, they would have no reason to do any work in the first place, and The State would lose money either way. TheseÂ unemployedÂ had to help all sorts of people with repairing their roofs and unplugging the rain drainage. However they ended up only helping the persons they personally knew. Still, they werenâ€™t fired, because if they did get fired, they would go back to doing nothing at all, and The State would be losing almost the same amount of money on them.â€

â€œThis proves that if you go by this altruist concept of freedom,â€ I concluded, â€œthat you will be left out in the cold after already having given everything away to others. Therefore this altruistic mindset is unreasonable. However the other pole is also unreasonable. Thus we are moving between the extremes of the unreasonable.â€

The conclusion of the examples discussed during the demonstration, and afterwards in the fastfood restaurant,Â is that The State does everything that it does with the eye towards social stability, regardless of any values such as Justice. The values are only relevant to the state as operationals â€“ that is, it asks itself whetherÂ certain values can move people to start up antagonism towards The State. Values are conceived as a priori subjective personal preferences, and as such as irrelevant to The State. Their only relevancy exists in the effects of values upon public perception.

This is proven by the case of O. J. Simpson (the case of the supposed double homicide). Everyone pretty much thought he was guilty and the evidence also pointed to this, however to serve Justice was irrelevant to The State. Its priority is self-sustenance, and as such social stability. Therefore it prioritized to quench the possibility of race riots over the actual content of the Simpson case.

â€œI know how The State reasons,â€ my friend said; â€œOrder is good. The State provides order. Therefore The State is good.â€

â€œWrong.â€ I said, â€œThe State reasons as follows: Good is a private opinion, but order is a fact. You have to submit to this order, not because this order is justified, but because you agreed upon the conditions of this order by being in it. Because before you entered this order you were somehow free, and from this original position of freedom you chose to be a part of this order.â€

â€œLastly,â€ my friend said, â€œfrom everything weâ€™ve learned by watching this protest, donâ€™t you think that it always comes down to the exact same thought. A thought shared by everyone at the bottom of their hearts, whether theyâ€™re left or right, Socialist or Liberal, progressive or conservative.â€

â€œThe thought goes somewhat like this: Everyone, in the end, works to make life a little more pleasurable to himself. Money and pleasure are our final drives. All humans are comparable in this, and therefore itâ€™s a shame thereâ€™s poverty in the world, and hunger, and nobody would have to live that way because it sure is possible to provide a sensible basic living for everyone.â€

â€œAnd thatâ€™s exactly how The State reasons,â€ I concluded: â€œThe State, in essence, wants you to cherish wishes and preferences that are primarily related to the material sphere. Preferences that can easily be satisfied by the consumer society. The State doesnâ€™t want to take away your freedom â€“ it wants you to envisage that freedom in small-scale objectives that you can easily meet without an impact on the larger whole. The State wants to give you freedom of expression so that you, by expressing your visions and goals, affirm them as personally held (read: subjective) visions and ambitions, thus nullifying the impact of those ideals upon society. So that those ideals wonâ€™t get in the way of the bonds of cooperation that try to manage us. Thatâ€™s the whole point: The protesters are entirely free to protest as long as they donâ€™t get in anybodyâ€™s way. Which means: As long as the protests donâ€™t hamper the essential functions that hold The State together. The finance sector is part of those functions.â€Â

All of this is to accommodate for larger quantities of life without ascribing qualitative classifications to the mode of life. So that society can hold larger amounts of people without all hell breaking loose. It wants us to be easy to manage. Relativism permeates everything.

(The Man, The System, The Order, The State, etc; the vast institutions of governments, political parties, banks, insurance companies, psychologists, media network and education system, are ultimately comprised of individuals.

However the chance that one or several individuals within those bonds of cooperation will stand up, is negligible as long as that individual has debts to pay and a family to feed. If he does speak up, he will easily be replaced by a more compliant drone. Thatâ€™s the way the cookie crumbles.)

On the inside of the stock market building, the cleric continued to fill in the columns of his excel page. Light rain trickled on the window,Â triggering him to look up for a second. He saw the stands ofÂ the protesters and their tents. Faint music rose up from the site. The cleric sighed. “What will they ever achieve?” he whispered in himself.Â Then his gaze returned to the monitor, slumpedÂ in his office cubicle, wearing his deftly grey suit.Â Perhaps tonight he would be able to buy that exquisite handbag, so that his wife’s temper would be eased for a few days. Maybe, if he worked very hard this month, he could have a Friday off, so that he could go campingÂ and finally spend some real time with hisÂ children. Â

The rain poured down heavily on the makeshift tents, that nevertheless had been holding up for weeks. One of the hippies lit a joint, and the smell ofÂ marijuana filled the moistly air. He passed it to his comrade and began to play his banjo again. He looked at the stock market building, where he caught a glimpse of a man wearing a deftly grey suit.

Wealth and the debt culture | Propaganda