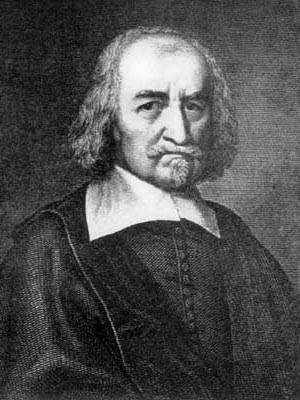 The origins of atomization

Euclidean geometry inspired the man who conducted a philosophy in which mankind was understood in analogy to the atom. That atom is on a path through space and in its path it is attracted to good particles while trying to avoidÂ bad particles. This causes atoms to collide. For example, men fight each other because they would like to date the same woman. In a fire, people will try to leave the building as quickly as possible, even if this means crushing others beneath their feet.

In the beginning of the human race, according to Hobbes, everyone was free to do as he wanted. He called this theoretical situation of anarchy the state of nature. This meant that you were at liberty to steal from others and to enslave them. Everything was allowed, according to Hobbes, because there were no laws yet. Maiming, robbery, slavery, none of these actions were sinful, â€œfor what is sinful other than the violation of existing rules?â€ Hobbes asked.

However the freedom that came with the state of nature was not necessarily to the advantage of the individual, because others might inflict harms upon you too. This constant pressure makes it difficult to pursue your own desires. If you would fall victim to another, as he goes about on his quest for beneficent particles, you would no longer be free. Instead the atom that is you would be restrained in its course. Therefore, to give all of the atoms sufficient space to pursue their desires, it was agreed that we all cede a part of the power over our lives to a sovereign. So that there could at least be a little order, as opposed to the anarchy of the state of nature. For Hobbes, submission to the laws upheld by the sovereign was the highest mankind could possibly achieve.

Atoms run on a free course until they occasionally clash. People must therefore have space so that they will not be forced to cohabitate. In the time when Hobbes was alive this was a viable picture, of course, since every small farmer had a piece of land that he could live off, be it very modestly. Landlords had manors, family-servants and shotguns to shoot invaders off their property. So they could provideÂ for their own sustenance. But how is this today? We really canâ€™t get around one another and weâ€™re not self-sufficient either. This begins in the classroom, the supermarket, the condos and office cubicles. Yet we see that people, even if they are close together in physical space, are still miles apart in their realms of experience. Â

We see this demonstrated in the nightlife, for example, or when going out. There people interact mostly for two reason: violence and sex. Hobbes would say, “Do you not see the nature of man? One is a wolf to the another. The best we can hope for is that there is some degree of order and that we are free to follow our desires. Do you disagree? Oh? Why do you lock your door when you leave the house? Then why do you put your jewels in a treasure-chest instead of openly displaying them on the table?”

The thoughts of Hobbes are everywhere in society. Yesterday I found myself conversing with a young lady who was ambitious about her academic pursuits of gender-history in Antiquity. She said that she thought that students had to have their own dorms and apartments and not live with their families, if they were toÂ “score points in her book”. When Iâ€™m speaking to persons like her, I have the feeling that one is subjected to a series of examinations; â€œdoes the subject have X, Y and Z?â€ With other words: â€œIs he/she a source of good particles to me? Or should I instead go with subject Z who will give me more good particles?â€ I answered that I completely disagree with her, because I feel more connected with my town of birth than with the city of my university. Participation in civil society is important to me.

She disagreed because according to her people need time for themselves. This points towards atomization in itâ€™s purest form: the individual is more and more drawn from community, into a small room somewhere between dozens of rooms of other individual students. I said that I canâ€™t identify with the student-culture. Sure, people hang out together to pass the time and because they share mutual goals, but as soon as that goal falls away, letâ€™s say one switches courses, these contacts quickly dissolve again. Unless spending nights in bars drinking together, these connections wonâ€™t be based on real solidarity but on loose sand.

But I guess thatâ€™s the difference between me and her: She has to focus almost all of her time on her academic subjects if she wants to be a scholar of some renown, and therefore needs almost all of her time for herself. Whereas gathering and storing knowledge comes easily to me. Iâ€™m not only a gifted scholar but also a natural leader (I usually find myself giving advice to others, making contact with people who fall out of the group or are ignored by others, and quickly see the right decision while the others are still discussing), therefore I have more need of being around people. And not just â€œbeer-drinking-buddies-sitcom-styleâ€ but feeling genuinely connected to one another. Contacts between people have to be easy, pleasant, convenient, amiable and lightly. If not, no good particles, and the atom will seek another course.

The thoughts of Hobbes are everywhere in society. If you complain that there is nothing but empty trash on television, people will say: “But there is nobody forcing you to watch TV, is there?” This betrays their supposition that the absence of strain is the highest one can achieve. The highest attainable good is the freedom to pursue the desires that come to mind, that boil up in you, as the atom is free to the highest degree when it does not meet any counter-forces in its orbit.

Calculate the distance between bodies (individuals, atoms) and chart out an optimal course for each with a least possible amount of friction. This is the Euclidean geometry behind Hobbesâ€™ political philosophy. Then, gather all the bodies together to form an even bigger body, the state, and put a sovereign at its head. This will make sure that the optimal distance between the atoms is preserved and that they wonâ€™t fall apart relapsing into the state of nature.

So we must be extremely pleased and content that we have an orderly society in which we are provided with choices. That those choices are meaningless and empty, well Hobbes doesnâ€™t have an answer to that.