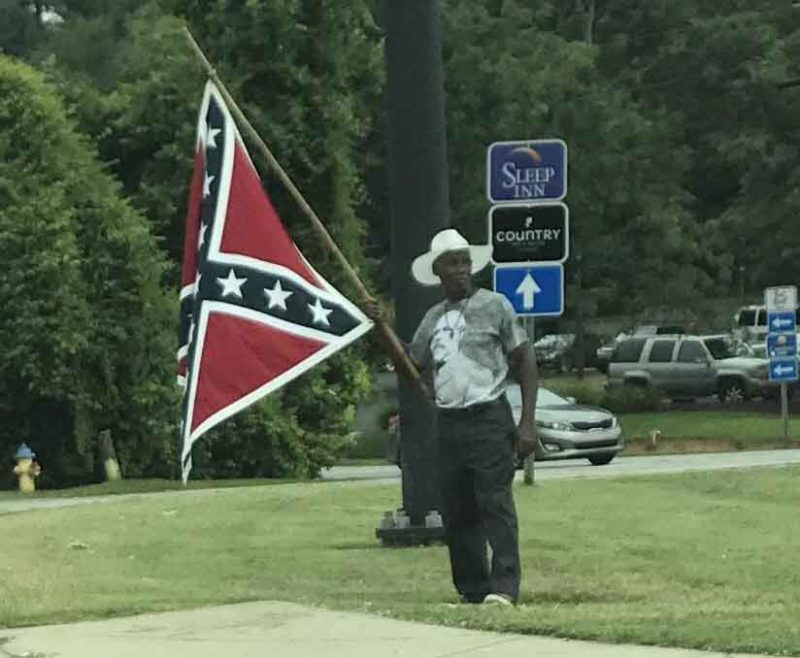 A conjectural philosophy like Leftism cannot tolerate dissent because having examples of functional non-Leftist lives refutes the assumption of universal necessity or right that the ideology claims for itself. Everyone must be Leftist, or Leftism will be seen as optional, and then it will start losing members as they see that there are other paths.

This particularly threatens Leftism because it is a cool kids club for those who cannot or do not want to succeed by doing well at a task, and instead want to socially climb their way to success. Leftists promise acceptance in exchange for allegiance against the “enemy,” those who succeed without social help.

As a result, worldwide Leftism — essentially a large trend, gang, cult, mob, or fad — spends its time hunting down any remaining examples of non-conformity and loudly and prominently squashing them. Today, the Leftist hit club has turned its sights on Liberia for the sin of being non-Leftist in attitude toward nationalism:

Liberia, on Africa’s west coast, was established as a home for freed slaves returning to the continent, escaping from unthinkable misery in the United States.

Perhaps, then, it is unsurprising that when the constitution was created, a clause was put in restricting citizenship to just those of African descent, creating “a refuge and a haven for freed men of colour”.

They have found a homegrown Leftist to do it. The most powerful thing about Leftism may be that it does not require actual contact to work on people, but spreads through imitation. The individual, wanting acceptance, does what others seem to do so that he can enter the cool kids club.

Leftists have their sights on Liberia because it is a nationalist country. They have redefined the term “nationalism” to mean “self-centered patriotism,” but the meaning it has had for most of history — under different terms, sometimes — turns out to be quite different. From the Nationalism F.A.Q.:

Nationalism, or the idea that the nation is described by ethnic group and its culture, contrasts the dominant idea of the last 200 years which is that of the arbitrary geographical region united by belief in liberal ideology, cosmopolitanism and internationalism/globalism. As the organic alternative to ideological government, nationalism defends unique attributes of individual ethnic groups, and posits a world order in which culture enforced by communities, not ideological rules enforced by centralized government, be used to regulate local communities.

Liberia is nationalist because it is designed for black people. In this case, “black” refers to any of the African races or their hybrids, a convenience necessitated by the experience of slavery. Normally, an African nation would be a list of related tribes, as occurs in Zimbabwe for example, but when tribal clashes occur as in Rwanda, history moves by its usual expedients of displacement and genocide.

Leftists find nationalism threatening because it creates competition for Leftism and a values system that may not be “higher” than the lofty aspirations of the social justice minded, but is certainly more innate and inherently understood. Race and ethnicity are part of the identity of an individual, and that identity must be stamped out so that it can have the dogma and elaborate rituals of Leftism imprinted in its place.

It is easy for Liberia — right now — to transition from nationalism to the nation-state or “proposition nation,” a community united only by political ideology and economic theory. No large influx of people from different races awaits Liberia, for now. This may change in the future as the world population increases and more are displaced.

The assault on Liberia comes at the same time that Leftists are savaging Israel for defending its national interests against the interloper Palestinians, and shows us that our enemy as nationalists is not any specific group, but Leftism itself. Leftists will replace any group, even customarily pitied victim groups such as Jews or blacks, in order to achieve its vision of egalitarian Utopia.

For many, the first instinct is schadenfreude, or enjoyment of the suffering of others. After all, we in the modern West are being torn apart by diversity. A more sober reflection says that nationalists everywhere are our allies, and Leftism is a type of parasitic brain infection that turns people demonic and should be opposed.

Axioms of Identity | Civic Nationalism Dies In A Blaze Of Nonsense