Civic Nationalism Dies In A Blaze Of Nonsense 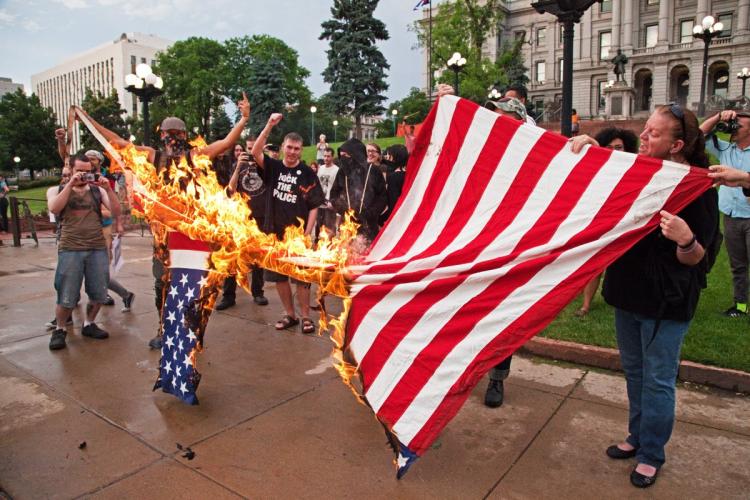 We live in a wonderful age where many distended illusions are dying. Their replacements are not clearly visible yet, nor are their deaths finalized, but hope in them has died, which means that people are not investing faith in them and are ready to leap to any plausible alternatives.

The list grows long: diversity, equality, democracy, feminism, pacifism, and even individualism are fading as people cease to see them as solutions and start seeing them as distraction. If you have an objective in life, everything else is distraction, so most things are of that category and are as threatening as defeat in combat.

Any time that vast change appears, those who want to avoid it appear and make the same appeal. They tell us that the change is too radical and that we should stick with what we have and try to find a way to exist within the system. This is different from changing the system from within; they want us to trust the system, but find a place in it where we can do what we want.

That only makes sense if you are an individualist who denies the need for civilization, hierarchy, values, customs, culture, and genetic consistency, all of which are how you make a society which achieves greatness and so thrives in the long term rather than being dragged down into third-world levels like almost all societies eventually are.

These people-against-change generally talk to us about the benefits of civic nationalism. That outlook holds that instead of basing a society in a genetic group, we should consider all people equal like the Leftists do, and control them with economic incentives, laws, and constant propaganda from media and government.

Here is the civic nationalist in the wild:

American culture is unique in that it’s an outgrowth of a creed, not a specific ethnic group, and especially not a race. What this means is that where America is today (#1 nation on earth), has nothing to do with Europeans settling the colonies, and everything to do with its values.

If you read between the lines, this civic nationalist is saying essentially this: we do not need people of varying quality. Instead, we will take in idiots, force them to obey our propaganda, brainwash them in our economic system, and make them ambassadors of our “creed,” or the dogma we force upon them.

In other words, people are no longer individuals with varying abilities; they are a fungible commodity, the herd, which can be instructed and controlled so that it does what is necessary to keep everyone having happy warm feelings about the future.

The call for “civic nationalism” can thus be revealed as exactly what it is: a demand for totalitarian Leftism to be introduced through mild methods… at first. The civic nationalist world involves a strong State, constant propaganda to reinforce it, and some form of isolation, ostracism, or punishment of ideological dissidents.

Compare that to what the Alt Right wants — a society ruled by kings, divided up into manorial empires, driven by unchanging but perpetually qualitatively improving cultural forces, where people are more interested in ideals and reverence than material convenience, comfort, wealth, and power — and you can see how the civic nationalist view is closer to the Soviet Union or Napoleonic France than it is to what its backers claim it is, namely the “classical liberal” society dedicated to individual freedom. In fact, it turns out that such a society is an illusion entirely, since when you give people freedom you get chaotic behavior which quickly turns to mob rule which then demands a totalitarian government to fix the problems of too much “muh freedom.”

Perhaps others have not yet fully articulated this linkage, but the enduring truth of this era is that we are realizing that dipping even one toe in the pool of individualism sucks us into a river torrent rushing toward Utopia through egalitarianism, which fails to create the “progress” it claims to and simultaneously generates a dystopia of epic but dangerously, subtle, proportions.

As humanity leaves behind this hurdle, we are seeing the world ahead of us if we stop getting caught in these ridiculous cycles of fighting to keep our civilizations from self-destructing. All of the energy we spend on politics, legal battles, red tape, diversity, guilt, and keeping up with the Joneses can be better spent on exploring the stars. If you are tired of losing and want to win for a change, the path leads away from equality.