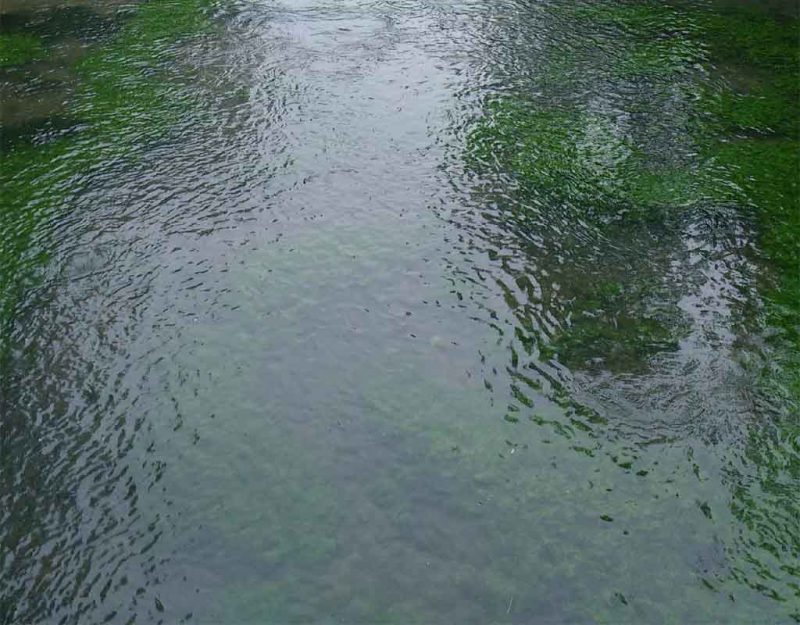 We keep hearing about how diversity is our strength and a minority-majority America will be so much better than the old one, but when we look closely at examples of nu-America, we see only incompetence and graft.

Take for example the ongoing floods in Houston caused by the city being too corrupt to fund a drainage plan, and releasing water into its own streets instead:

A stronger-than-predicted swath of storms stranded motorists and school children for hours Tuesday as floodwaters filled streets and homes in the Houston area from Sugar Land to Kingwood, according to officials.

With the ground saturated, anytime between now and Saturday it’s not going to take much to cause high water situations,” said Francisco Sanchez, spokesman for the Harris County Office of Homeland Security & Emergency Management. “This is just a preview of what we might see next weekend. The forecast was wrong and we hope we don’t have a repeat of this.”

“This is worse than what we experienced in Harvey,” Sugar Land spokesman Doug Adolph said. “Our storm drains have been unable to handle the rain in the short amount of time.”

Some of this flooding occurred in a northern exurb, Kingwood, which recently lost drainage space as the city expanded around it. It turns out that the developers and their scientists may have lied about the risk of flood:

In the conclusion of the cover letter of the report dated 8/28/18, Phyllis Mbewe, the project manager of hydrology and hydraulics for LJA Engineering guarantees Dan Wild, Montgomery County’s assistant engineer, that there will be:

She says, “…the proposed development of the 268-acre tract creates no adverse drainage impacts for events up to and including the 100-year event.”

Obviously this was not true as both of those communities flooded in what people are calling a 50-year event rainstorm. It turns out that when the water has nowhere to go, it runs off into the community next door, and then that floods instead.

But what about the reason that the rest of the city experienced flooding, just a couple years past when Hurricane Harvey soaked the city and then the Army Corps of Engineers opened the dams and flooded its oldest neighborhoods?

Apparently the City of Houston has been collecting money to maintain drainage and then doing little with it, causing a breakdown across the city in the ability to get water out of heavily rained-on areas: 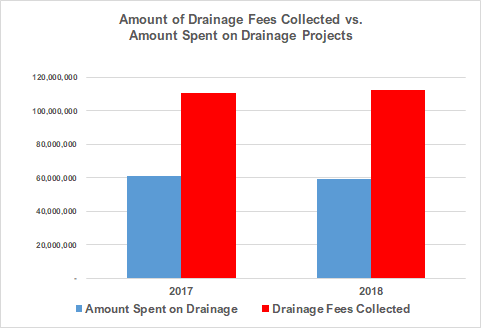 The responsibility for flood control is divided, generally speaking, between the County/Corps which maintains the bayou/river system (commonly referred to as the “riverine”) and the City which maintains the conveyances that get the water out of the neighborhoods into the riverine. About half the flooding in Houston has historically come from stormwater breaching the banks of the riverine and overflowing into neighborhoods. The other half comes from the City’s system being unable to get the water to the riverine fast enough to keep it from backing up into the streets and ultimately homes.

We know that the current flooding is the City’s responsibility because the Harris County flood gauge on the San Jacinto River at Lake Houston Parkway shows the river has not over topped its banks.

In August, 2018, the City’s Public Works Director admitted to the Houston Chronicle that her direction from Turner was to spend only half the drainage fees on drainage [click here for story].

We have a city that turns a blind eye to its drainage problems and then cripples its spending on fixing those problems, ensuring that floods will be frequent and destructive. A cynic might think that the city simply wanted to solicit more funds for drainage.

However, this is just part of a larger pattern. Houston is broke because it spends its money on pensions for minorities and payments to friends of its mayor, Sylvester Turner:

Fiscal Times, an actual news organization with actual reporters whose methodology is actually sound (ahem, Care.com), released a report this week rating Houston’s financial wellbeing as among the worst in the nation.

And where does the money go? No one knows, because minority-majority Houston refuses to release vital information on a regular basis:

More than a year after a recycling company which failed to get city business asked for emails from one of Mayor Sylvester Turner’s cabinet officials through the state’s public records act, city officials still have not released all of the requested emails and were questioned Tuesday by a judge about the lack of disclosure.

“Can you tell me today that you have responded to their request?,” Judge Kristen Hawkins of the 11th Civil Court asked asked Fernando De Leon of the Houston Legal Department.

“So we’re in the process, we’re in a continuing process of doing so,” De Leon answered. “We are still working on some production.”

In the case they are describing, a recycling firm offered Houston a functional recycling service, and Houston instead went with a previously unknown firm for a high price, then scrapped its recycling program entirely.

This reeks of the classic kickback scheme where a contract is made, nothing delivered, and then whoever engineered the contract gets money under the table, employment, consulting fees, or other benefits.

That sort of weird accounting fits into a larger pattern of hidden spending which shows huge amounts of money unaccounted for:

Mayor Sylvester Turner blames it on a Rebuild Houston promise to pay down city debt.

That simply doesn’t hold up. The city’s credit card balance is just as big today as it was before Rebuild Houston was approved.

The Controller’s Office cannot attest to the claim that Rebuild has paid down $1 billion of city debt. The city has paid down $622,962,600 of Rebuild Houston related debt per the… Finance Department.

That is still a sizable number, but that is paying down solely street and drainage debt. In the interim, the city has run up levels of other public improvement debt.

In other words, half a billion dollars is in the wind. City officials could flee to Switzerland on that kind of money, and never face any consequences. This type of thing forms part of a pattern of behavior under the Turner administration.

Not surprisingly for a legal shakedown, this is happening in a city with very high property taxes bringing in a large amount of money:

According to WalletHub, a personal finance website, Texans this year are paying an average of $3,327 in real estate taxes. It’s the fifth highest amount in the United States and 59 percent higher than the average American household’s real estate property tax bill of $2,089.

Despite all of this money coming in, Houston has $8.2 billion in pension debt and is raising taxes to add more police officers, including for the pensions they can get after two decades of service.

In order to support this, the City of Houston has fired firefighters in order to transfer money to the police department, despite voters having approved more funds specifically so they could go to the firefighters, who have not had a raise in over a decade.

While all of this fighting over how to steal the money goes on, Houston still has a problem with frequent flooding, brought on by its massive expansion in the past fifteen years. The problem can be solved, but it will require large expenditures for the engineering and construction:

Generations of Houstonians have recognized the need to move stormwater out of their neighborhoods. Houston’s population, however, has multiplied more than 10 times over the last 80 years.

Based on large-diameter soft-ground tunnels built or under construction elsewhere in the United States, early cost estimates have centered on approximately $100 million per mile of 30-to-40-foot-diameter tunnel. That means a tunnel from the reservoirs to the Houston Ship Channel 20 miles or longer could cost more than $2 billion.

For a city with an operating budget of $2.5bn per year, Houston seems to have problems setting aside money to pay for its pensions or for saving itself from frequent floods.

In addition to obvious mismanagement of existing drainage funds, minority-majority sanctuary city Houston faces an inability to account for its money, and cannot seem to set up a funding plan to actually address the drainage problem instead of simply watching it happen.