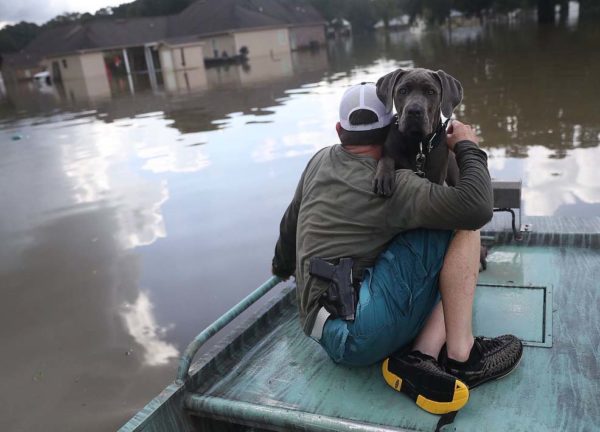 A week after a tragedy, the psychological effects begin to manifest. People who otherwise were stable and sane start to act differently. They stumble over common words, drive as if they were distracted and on heavy drugs, and make decisions with no relationship to reality. The tragedy has set in; now, the body assimilates it, taking all of the darkness within in an attempt to master it.

People experience these little mental health moments as they become unable to deal with the sheer crisis around them. Houston survived a hurricane, only to be flooded by its government which released the reservoirs in order to avoid endangering the newly-built areas around the city. There was hope, and then it perished under waves of rain, pond and sewer water.

It is perhaps a euphemism to call these failures of cognition “mental health moments.” They occur when people check out of reality entirely, and turn into the world of the self, like autistics stimming looking for a source of inspiration within themselves instead of out there in the world or even the more dangerous territory of their inner selves.

In fact, it seems like our entire society uses natural selection to ensure that the only people who prevail are those who do not mind going into a mental fugue state. Too much traffic, a task at a job that is both pointless and sure to be wasted, a society wracked by legal corruption? Just go into the zone of nothingness and allow the hours to pass without pain. It’s like morphine plus religion.

This mental discoordination appears after a disaster. The normal state of things, guaranteed by social good feelings and government, has been interrupted. People feel a sense of loss, but even more, a feeling that all of the normal rules do not apply. The promises were lies. The usual way of living has failed and been replaced by a more basic sense of survival.

When Houston flooded, the disconnection appeared. The normal way of doing things, which we assume to be safe and benevolent towards us, revealed itself to be empty and toxic. The assumptions of our fellow citizens, and the glowing newspaper articles about how people “came together regardless of race, age or gender” showed that they were not just lies, but lies designed to make us into ideological zombies.

White people — mostly Western Europeans — love diversity, mainly because they are naturally competitive, and so this becomes just another way of beating your neighbors. You have a black friend? Well, I have Asian, Latino, Indian and black transgender friends. And yet, when all the drama is done, they retreat to their all-white suburbs, and if those become infiltrated by the Other, the value of those houses mysteriously drops as all those anti-racist white people go elsewhere in search of others like them.

In that sense, we exist in two realities. The public reality affirms the equal nature of all people; the private truth points out that all of us want people like ourselves to exist alongside. Every now and then, the streams cross, as happens when a disaster removes all the pretense and forces us to adhere to what actually functions in terms of results in reality.

After the Houston floods, the mayor came out and made a speech. Then, he indulged in the pretense of the crowd: he allowed them to criticize him, ask “pointed” questions, and demand answers. Victory was on his side: there are always reasons why none of those apply, or at least can be deferred long enough to be swallowed by the memory hole.

The audience immediately separates into two groups: the fools, who do not understand that politics is a game of image, rely on the promises made and the laws written, and demand results. More savvy, the realists recognize that politicians thrive by finding large groups of people to vote for them, and so those laws, standards, and conventions can be overthrown and replaced.

Whatever the crowd wants, it gets.

The emptiness of the response shows us how much we are self-selected victims of democracy. We fear the moment where we must prove ourselves in reality, so we fall back into these human-only activities where all of our choices are “just opinions,” and therefore never wrong. We make the economic decision to suppress reality in favor of our own pretense and that of our friends.

All is vanity. About the only pure things left are love for nature and love for God. Those who adore and trust whatever created all of this, while knowing that it was not necessary and therefore somewhat arbitrary, recognize that it tends toward a proliferation of life, beauty and goodness. Such people have not an innate purpose, but the ability to choose a logical path which resembles purpose.

Humans fear that purpose because it makes us feel small, and we retaliate by demanding that our opinions become law, which is what the term “equality” really means. We are equal without having to adapt to our world or to contribute anything. We can just be as we are and never change, which means we never cross the streams because we remain only in that public world.

In the public world, appearance matters more than reality. Most people just want to be nice, or inoffensive but with the right motivations, because that way they feel powerful for having used The System toward their own ends. But this replaces reality with human emotion, which is why so many of them would rather die than be proven wrong.

Again, natural selection emerges. All of the people who were willing to confront reality have died off by becoming Romantic poets or joining the French Foreign Legion. What remains are those who live in a world of human emotion, denying both reality out there and the deep inner traits of their personalities which demand meaning, something which requires context in the world.

The result is that our nations do not feel like home anymore. They are ruled by a mechanical ideology that resembles that of the Soviets. The people who win are those who care the least about the consequences of their actions. We become neurotic, and come to hate each other. Much of this comes from our denial of the situation around us.

For example, in Houston, Sylvester Turner is an affirmative action mayor. He was elected because he did not offend the various minority groups, who did not want a white guy in charge. This means that he will say whatever makes those groups happy, and offer to everyone else empty excuses.

We need to call guys like this what they are — Kwame Kilpatrick (Detroit), Lee Brown (Houston) or Robert Mugabe (Zimbabwe) diversity candidates — because they are fundamentally insincere to the stated objectives of multiculturalism and democracy. They work for their own groups, which requires obliterating all others, and they do this through the soft methods of law, economics and social opinion. People go along with it in order to seem intelligent, while insisting that what we actually have is the surface definition of democracy and diversity.

The result shows us our future if we do not remove diversity. All groups act in self-interest, except the pretentious Caucasians, and so when a member of these groups gets in power, he does nothing but steal, corrupt and manipulate. That benefits his people. The rest of you will starve in flooded homes.

Across Houston, in its white neighborhoods, piles of debris and soaking belongings have emerged. The reservoir was emptied so that those who are likely to support the mayor were not inconvenienced, but those white people — unlikely to vote for him in the first place — they can be destroyed. It’s not like they will ever rise up against the system they have created.

You can see immediately whether someone understands the world around them by their attitude toward democracy. Those that think their elected leaders are coming to save them, or that they can manipulate those leaders, or even that a logical argument is being had in the media or with politicians… these people do not get it. They still believe in the surface.

Someone who sees government as an employment program that sells power in exchange for donations to candidates, the media as an entertainment product that reports only what creates an emotional reaction, and other people as a herd in which most understand almost nothing, by having seen this things, can never believe in “the System” but has seen the actual nature of people and their behavior.

We are victims of democracy. We believe in it, when it is actually a form of theater; we trust it to save us, when really its objective is to enrich its own members. And then, as doom approaches, we rationalize it, so that we can feel good and smart for having chosen the winning side, even if it will eventually destroy us.

This originates in our own hubris. We insist that whatever we do is right, instead of the natural form where we must do what is right according to the order above us, including nature and whatever gods we can summon. Our hubris makes us blind, and so we trust the Sylvester Turners of the world, forgetting that their goals do not overlap (much) with our own.

That hubris prevents us from seeing the obvious. This life is insane: sitting in traffic, tolerating idiocy at the office, pretending everyone matters and claiming our world is the best possible option, all reflect a mental health moment that has become a crutch. Surrounded by ugliness, we just space out when the time comes.

Even greater insanity might be trusting democracy itself. How can one reasonably expect a herd of human animals — bickering, preening, conformist, emotional — to make any kind of realistic choice? The answer is that one cannot, and so whoever tells them pleasant lies will win the day. This especially applies to smarter and smugly self-satisfied groups like Caucasians.

When you add diversity into the mix, it becomes even more impossibly unstable. Houston, after all, had two floods: one that flooded the usual areas that get hit by heavy rains, and the second caused by the release of water from the reservoirs, effectively using most of the city’s remaining white areas as a giant retention pond. The first flood was unavoidable, but actually not all that bad, compared to previous events; the second was catastrophic, and a product of the toxic brew of diversity and democracy that strangles Houston.

The West is headed toward dhimmitude not through importation of Muslims, but through diversity and democracy. We invite in the world; they vote against our interests because their interests begin when our power is shattered. And then, to rub our nose in it, they flood our neighborhoods and refuse to pay for actual drainage systems because there are benefits to be had and paid out, for votes, taken from our money.

In the long term, as we watch Houston float away, it becomes clear that diversity will never work. It merely enslaves the productive to the needs of the destructive. In turn, that makes the productive neurotic and oblivious, and so they self-destruct in emotional events far more devastating than even a 1,000 year flood.

Podcast #16: Writing Winning Characters | How Kitties Made Me A Fascist