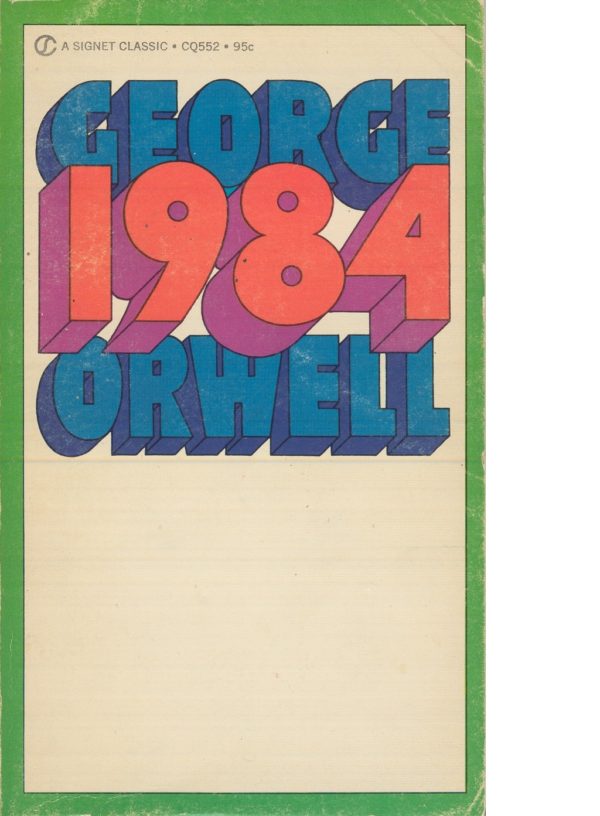 If Neoreaction has a founding idea, it is that the mechanisms of power and not intent define the role of government; if the Alt Right has a core concept, it is that all things are merely what they are and act in self-interest. When we apply these ideas to our sacred cow institutions, we see something entirely different.

We might ask ourselves, for example, why the book 1984 is taught in every high school. Would a regime teach books that actually threaten it? Can a book, which is interpreted by its audience according to what they can understand and therefore limited in what it can express if it wants to reach a wide audience, ever threaten a regime, if understanding the power structure of that regime requires more than a one-dimensional emotional gloss?

To understand the nature of power is to validate the postmodern idea of the dichotomy of text and subtext. Text is the meaning of words as found in the dictionary, and the saying of publicly-acceptable things; subtext is the implications of the patterns found in words, and the articulation of that which will not make it past the social filter of public acceptance. In our society, nothing important is said in text because public opinion will destroy the speaker with ostracism, boycott and outright hostility.

What this means for the modern citizen is that what is said by government is not what it actually intends. What it intends is defined by its role, which in turn reflects who will be attracted to government. Those who want power without the legitimacy of ability will always be drawn to government. The competent will not.

For this reason, government will always promise open-ended terms, or those which use the ambiguities of language to appear positive to us: equality, freedom, diversity, peace, love, friendship, empathy, compassion, kindness, and sympathy. These mean nothing, on the subtextual level, but have high importance on the textual level, and this alone tells us they are misleading.

These terms are open-ended because they do not indicate against what they are protecting. Equality, against what force of inequity? Peace, against what war? Love, against what hatred? Freedom, from what? — these questions are never answered. They want to use these terms which, linguistically, include all in their scope — freedom from everything to do anything — as a means of manipulating the human mind.

The root of this mentality is control. In any group, power belongs to the person who can hold the group together and direct them toward an objective, if for nothing else to keep them too busy to revolt or desert. Control is what holds the group together; it is equality, or the notion that every person must be motivated and threatened by the same forces. It appeals to the mentality of a powerful leader who wishes everyone else to fall in line and do his bidding, and flatters the individual, who believes he is receiving far treatment because everyone else gets exactly the same thing.

If human history has an Eternal Moron, it is the notion of equality/control. The two parts are inseparable: equality mandates equal treatment, which conveniently is what control demands, so that none threaten the hierarchy of two parts, comprised of a controlling agent and his minions.

A human group can always be held together by the notion of “everyone do the same thing.” This eliminates all internal conflict by assigning people the same rank, which allows the controller to directly micro-manage each person and avoids the need for secondary and tertiary ranks who could challenge the controller. Instead, each person has a choice: obey the herd, or face its wrath.

We call this “freedom” because we all have the same rights and obligations. On the other hand, this freedom requires us to give up most of our time to the process of being equal. We all truck on down to jobs that look about the same, which means that the fastest and smartest spend the same amount of time as the others, which flatters the others because then they do not feel inefficient.

In addition, because none have rank above any others, all face the same social problems. This means that instead of localizing the problems to those who cause them, all suffer alike. Similarly, any bureaucratic process is geared toward the lowest common denominator so that the least capable person can achieve it, but this means that the more capable wait through pointless tedium that they do not need.

1984 was a forgery. Written in respond to Aldous Huxley’s Brave New World, it posited a counter-theory to the Huxley idea, which was that societies destroy themselves through the selfish demands for power of individuals. Instead, Orwell argued, the problem is power itself, and the authoritarian systems it creates, ignoring the fact that there is a cause for the effect that is these authoritarian systems, and historically, it has been the notion of equality.

Our problem is not totalitarianism, but what creates totalitarianism, and that state suspiciously resembles “freedom.” The more different directions in which people move, the more strong authority is needed, until the point where only an all-powerful controller can keep the society together because it is so chaotic. Freedom is slavery. Huxley recognized the oppressive nature of groups with freedom, but Orwell tried to conceal it.

These groups form like tornadoes. At first, it is simply a few claiming victimhood who clash with the others, and then smarmy leaders arise to end that conflict. Their method is to reduce all to the same role. This mentality, called Crowdism and manifested in our time as Leftism, relies on self-pity: each person believes themselves to be a victim, and projects this onto others as a way of creating a group of victims who demand power.

In this way, we arrive at modernity. People spend all day at tedious jobs and bureaucratic functions in order to avoid poverty. They hide in their apartments and homes from the social decay exploding around them. They are told what they cannot think or say, and commanded to always do what the herd wants. Their oppressor is not the controller, but the herd, which is composed of pretense and vengeance.

Control kills civilization and replaces it with a type of slavery which goes unrecognized by the majority, who are oblivious to such concerns. Only the intelligent suffer, which is the point; the intelligent can challenge power, where everyone else is pretty much inert. With pleasant thoughts of freedom, the herd votes itself into slavery, and civilization dies, over and over again.