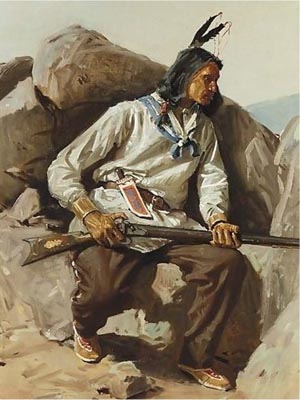 Who is this guy?
It doesn’t matter who he is.
It’s what he’s doing that matters.
He is observing.
Observing what?
Reality!

He lives by observing what is there, and interacting with it. Smart guy! He gets my admiration, although what he is doing is — in itself — no big deal. Or rather, was no big deal, until quite recently.
These days, reality lies buried behind feelings, interpretations, judgments and politics.
What is there, really doesn’t matter any more. What matters is how you feel about it, and what it means to you. And how you can best use it to beat others about the head with.

Look again at the picture. What do you see?
I see an Indian. He is sitting on a rock. He carries weapons. He is alert.
But there are many, who would see all, or some, of this, take into account the text I have written, and come up with something like:
“I see a savage. This is a stereotype! This is something that offends Native Americans!”
Or:
“I see a Native American, but the writer refers to him as an Indian, therefore he must be racist, because he is using an outdated term which demeans Native Americans.”
Or:
“I see an armed menace. This association of Native Americans with violence is an offensive stereotype, and must be confronted.”
Or:
“I see a First Nations guy, (being Canadian) being misrepresented in some way that I am unable, as yet, to identify, but I will work on it until I can…”

So what is all this about? Where am I going with this? Good question: give me a moment to decide…

Reality. I have been pondering this concept for a while, now, and have observed several interesting phenomena connected with it.
Nobody sees it in quite the same way. Hence the current idea that reality is purely subjective, and so I have no need to accept yours. Along with the added extra, so characteristic of the left: that mine, however, is authentic, and so you are required to accept it as such.

Until recently, reality was a uniform thing subscribed to by almost all people, within a society. Everybody agreed upon many basic things, and so knew what was what, and where they stood.
The ones who didn’t, were looked upon as mad, and as long as you were not one of them, your life remained viable.
Now, however, nobody agrees upon much of anything, and while rightists generally shrug and accept that this is so, leftists generally throw a fit and demand that their own, special reality, is the only real one. And this is why rightists generally view leftists as mad. Because they do this absurd thing, and demand that everyone else does it too.
And this demanded acceptance of mass insanity, and the re-branding of it as “normal”, results, as you have noticed, in what we currently refer to as a socialist society.

Well there’s something wrong with that.
Centuries of subscribing to one, uniform reality, suddenly brushed aside and replaced with something that clearly can only end in disaster.
Yeah: that’s real smart.

Degradation: the removal of all live content from life, and somehow expecting nobody to notice its lifelessness.
Devaluation: Socialism devalues everything it comes into contact with. God. Religion. Marriage. Heterosexuality. Reason. Money. Real Estate. Everything!
Denial: in spite of the fact, now indisputable, that everything we have all depended upon for our lives and our futures, is now crumbling down around us, still we change everything around, every few days, and proclaim that anything other than socialism is evil.

Well there’s something wrong with that, too.
We had all better start understanding something about the left: everything they come into contact with, turns to dust.
Don’t take my word for it. Think about it. Research it. Test it and see.
Remembering that you, too, risk being turned into dust, merely by contact with this socially-transmitted disease.
So what to do?

Figure it out for yourself, if you’re able. That would be the best thing. Or consider these points:
If you’re reading this at all, you’re conservative already, or else a spoiler from the swamp.
If you plan on remaining what you are, then start defining Reality. For yourself. No hopes, no desires, no interpretations, no emotions. What do you see? What you see, without modifications, is Reality! Accept no substitutes!

You will discover, that the disease has made subtle changes to your perceptions of what reality is. Pressure from everywhere has done this. Conditioning. Dogma. Out and out brainwashing. You don’t notice the small things for a long time, but finally, they all add up to a big thing, and you’re on your way to becoming as lost as the rest.

I recently had a revelation, in the form of a flash of the totally obvious:
My whole existence revolves around spirituality. It’s the way I live. Nothing at all to do with the New-Age crap that the left took up and devalued merely by coming into contact with it.
No. I do nothing for show. And nothing that has no obvious purpose, or result. I balance.
And writing for this site, I sometimes get attacked, by a few warped types, intent only upon destruction. I make an especially juicy target, because “I try to appear to be spiritual…”
Note the “try to appear” bit. Because a leftist’s whole reality is based upon appearances, with a dose of equality added, for show. Thus whatever I am, and whatever I do, it must be fake. Because if it were them, or anyone like them, being it, or doing it, then of course, it would be.
Still with me?
The punchline is this:

Spiritual people dress up in white bed-sheets, smile vacuously all the time, do nothing but act nice, and be totally harmless!
And it suddenly occurred to me, that even I was thinking and behaving along these lines, albeit without the bed-sheets, the vacuous smile, and the acting nice.
No.
Harmless I am not. Never have been. Never will be. A man should, under no circumstances, ever be harmless!
Some readers expect me to behave like a Hollywood Christian, because I speak of things spiritual. To them, I say:
Prepare to be disappointed. And surprised. I can be exceedingly not-nice, when I so choose, in ways most have never even imagined.

And this fits well with conservatism: a state of mind where reality is Reality, not subject to individual whim. Not subject to being re-defined with each new leader, idol, whim, or movement.
It is what it is. Life. Reality:
A dangerous place in which a man must sometimes be dangerous.
Armed with an unflinching gaze, and the courage to back it up.
Niceness doesn’t even enter into it.
Hard-ass first, and all things later.