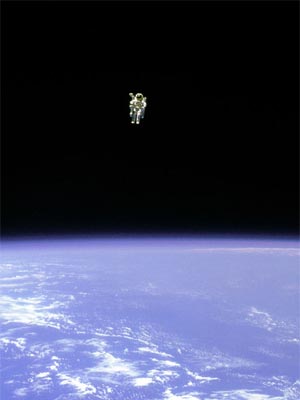 The good guys never get a break.

They are always outnumbered, always undersupplied, always short on people understanding what they’re doing. Good is a measurement of consequences; bad insists that we measure methods, and appearances, instead.

More commonly than not, you have to do some scary stuff in order to get good results. Our ancestors had to fight off warring tribes, slaughter animals, kill murderers, and face untold disease and deprivation. In our comfy modern society, we forget these things are part of life and not just The Discovery Channel.

Many of those who did the right thing gave their lives so that a better existence could come after them. It is not an unthinking sacrifice; it is a gift of love, even if it occurs through hatred (in battle, or in conquering the delusional and destructive people who walk among us).

To do good is to be misunderstood up until the consequences of your actions are seen; to do bad is to fool people with appearance for long enough to do your evil deeds and vanish into the hills.

The oldest human ritual may be brave people coming together to do the right thing, aware that the deck is stacked against them and even the people they trust most may have no idea what gift is being given to them.

This is why we celebrate those who — regardless of personal consequence — sally forth to do what is right. We call this courage.

WESTMORELAND. O that we now had here
But one ten thousand of those men in England
That do no work to-day!

KING. What’s he that wishes so?
My cousin Westmoreland? No, my fair cousin;
If we are mark’d to die, we are enow
To do our country loss; and if to live,
The fewer men, the greater share of honour.
God’s will! I pray thee, wish not one man more.
By Jove, I am not covetous for gold,
Nor care I who doth feed upon my cost;
It yearns me not if men my garments wear;
Such outward things dwell not in my desires.
But if it be a sin to covet honour,
I am the most offending soul alive.
No, faith, my coz, wish not a man from England.
God’s peace! I would not lose so great an honour
As one man more methinks would share from me
For the best hope I have. O, do not wish one more!
Rather proclaim it, Westmoreland, through my host,
That he which hath no stomach to this fight,
Let him depart; his passport shall be made,
And crowns for convoy put into his purse;
We would not die in that man’s company
That fears his fellowship to die with us.
This day is call’d the feast of Crispian.
He that outlives this day, and comes safe home,
Will stand a tip-toe when this day is nam’d,
And rouse him at the name of Crispian.
He that shall live this day, and see old age,
Will yearly on the vigil feast his neighbours,
And say ‘To-morrow is Saint Crispian.’
Then will he strip his sleeve and show his scars,
And say ‘These wounds I had on Crispian’s day.’
Old men forget; yet all shall be forgot,
But he’ll remember, with advantages,
What feats he did that day. Then shall our names,
Familiar in his mouth as household words-
Harry the King, Bedford and Exeter,
Warwick and Talbot, Salisbury and Gloucester-
Be in their flowing cups freshly rememb’red.
This story shall the good man teach his son;
And Crispin Crispian shall ne’er go by,
From this day to the ending of the world,
But we in it shall be remembered-
We few, we happy few, we band of brothers;
For he to-day that sheds his blood with me
Shall be my brother; be he ne’er so vile,
This day shall gentle his condition;
And gentlemen in England now-a-bed
Shall think themselves accurs’d they were not here,
And hold their manhoods cheap whiles any speaks
That fought with us upon Saint Crispin’s day. – William Shakespeare, Henry V, Act 4, Scene 3

This sentiment is eternal. It is the root of conservatism: a belief in an order to life and a purpose to it, such that personal sacrifice is secondary to achieving complement with that order and sustaining its beauty.

We either believe in the order of the cosmos, or in ourselves as the only order and the cosmos as a means to the end of ourselves. But that is lonely, like being cut adrift in infinite space with only our own warmth to cheer us.

Whether we believe in gods, afterlives, judgments or not, we need a sense of broader order. It is not an emotional or religious need, or even a human need. It is a mathematical need: the isolated object without context becomes a dull cycle, an entropic feedback loop collapsing on itself, a norming of signal so that it comes up all zeroes.

For all that it has done to shatter us, and to shatter courage so that the cowardice of individuals can be accepted as the norm (“equality” is shorthand for letting the mediocre average predominate), this spirit still thrives in our blood and in our spirits. It shows up from time to time.

By all that you hold dear on this good Earth, I bid you stand, Men of the West! – The Return of the King

There are always times when we doubt the quest of life itself. The quest is at first merely adaptation; then it becomes clear we want to adapt with grace and beauty; then, that we want meaning. A point to it all other than the material.

From that comes idealism and heroism, and oddly, a superior form of realism. Realism is not the tangibility of matter; it is the intangibility yet certainty of consequences.

Sam: I know. It’s all wrong. By rights we shouldn’t even be here. But we are. It’s like in the great stories, Mr. Frodo. The ones that really mattered. Full of darkness and danger, they were. And sometimes you didn’t want to know the end. Because how could the end be happy? How could the world go back to the way it was when so much bad had happened? But in the end, it’s only a passing thing, this shadow. Even darkness must pass. A new day will come. And when the sun shines it will shine out the clearer. Those were the stories that stayed with you. That meant something, even if you were too small to understand why. But I think, Mr. Frodo, I do understand. I know now. Folk in those stories had lots of chances of turning back, only they didn’t. They kept going. Because they were holding on to something.

Frodo: What are we holding onto, Sam?

Sam: That there’s some good in this world, Mr. Frodo… and it’s worth fighting for. – The Two Towers

When the deck seems stacked against you, and the omens are bad and the fear is strong, remember this.

You are fighting for every beautiful moment you have known, not just in the past, but potentially in the future.

You are fighting toward a vision, bringing it closer to yourself through time and struggle.

You are fighting for beauty, for meaning, and for all the intangible things that fill the soul when all the material in the world — all the comfort, safety, security and pleasures — could do nothing.

No matter who tells you that trying to do the right thing, and exhuming your courage in the face of a time of slovenly self-satisfaction, remember what you’re fighting for.

The good guys are always overwhelmed. There are always more people who are content to sit around, doing nothing but eating, rutting and defecating. They always complain, and their complaints are always “idealistic,” meaning about fanciful notions and social constructs like equality.

The real battle is out there, in the need to create a better order. It does not involve sitting idly by. It may involve loss of self. But through that sacrifice, a better world — a new beauty — is created.

Nationalism or shopping mall | Keeping up with the Joneses