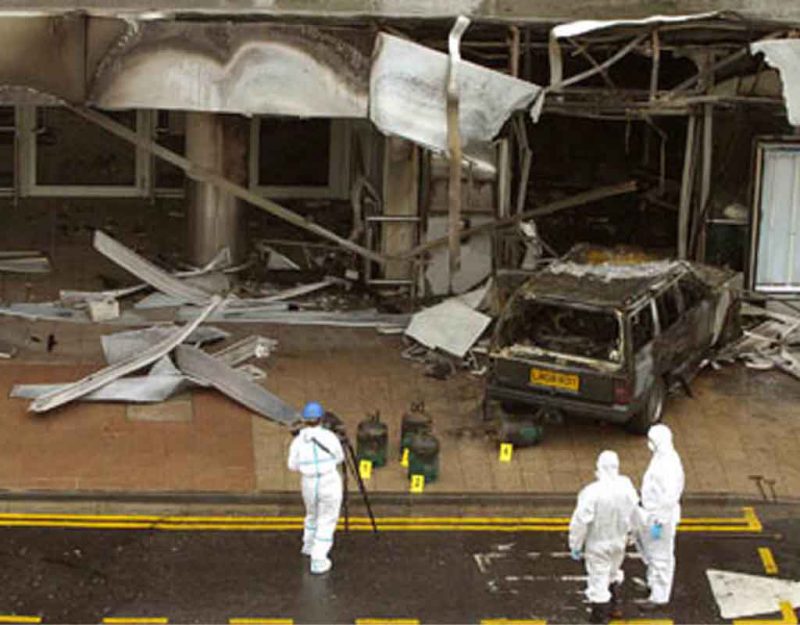 Fiction writer Clayton Barnett started off writing as a means to express what he sees as one of our likely possible futures, combining science fiction and dystopian futurism to portray a world like our own once the illusions collapse.

Barnett, whose fiction graces these pages and who was interviewed by Uprising Review some time ago, recently launched a new work, Crosses & Double-Crosses, a dystopian but cerebral view of the future collapse of democracy and beginnings of restoration of traditional order. It starts with great promise as this synopsis suggests:

Unexpectedly stranded in the Dallas, Texas, airport, on her way back to Manhattan in the midst of the Breakup of the United States, attorney Silvia Fernandez finds herself suddenly enmeshed in the new internal security bureau, ExComm, of the emergent Republic of Texas.At once a selfish opportunist to advance herself into power, Sylvia at the same time seeks to lay the groundwork to put an end to a state-terror organization before matters advance from the crucifixion of criminals to a bloodbath that will engulf them all.

Fortunately, Barnett has a long history of writing about the end of the world and the technological and political challenges awaiting history, sort of like Star Trek fused with Jerry Pournelle and Jack London. You can explore his fiction with “Accursed Heart” and a writing guide he created, “An Introductory World-Building Guide,” on these pages as well.

We are lucky to be able to present Crosses & Double-Crosses in serialized format, starting with the first installment, “Rough Landing.”

Sylvia stifled yet another sigh as she stood in line at the car rental office. Being unexpectedly stranded in the Dallas/Fort Worth airport was one thing. Finding out there were precisely zero flights from there to anywhere else in the United States was another. And it got better: even for car rental, all companies wanted either specie or the new Sino-Indo-Russian currency, the ria. The line moved again. They were now second.

“Big Sis, how much longer?”

Sylvia turned her head left to look down a bit at her younger sister, Roberta. Unlike Sylvia, who ended up with her father’s aristocratic Spanish looks, Roberta appeared a throwback to their mother’s ethnic Chinese mother: dark hair and almond eyes. Only her skin was lighter, from their father. In contrast to her big sister’s gray suit, Roberta was dressed for what she was: a college student going back to school from an overseas trip that lasted six months longer than anyone anticipated. Roberta glanced around furtively then whispered into Sylvia’s ear.

“<Are you really going to use the silver that Grandmother gave you?>” Roberta whispered in Tagalog. “<That’s supposed to be for emergencies!>”

“We’ve little choice if we’re going to try to get home,” Sylvia replied in a conversational tone in English. “The news we heard on the flight from Manila to Vancouver, B.C., didn’t make a lot of sense, but I can’t imagine things are as bad as some of the talking heads on the news programs make it out to be… about deaths in the millions…”

“Excuse me, please, ma’am?” They turned to regard the man behind them in line. About an inch taller than Sylvia, he wore the ubiquitous denim jeans that everyone in Texas seemed to. His shirt was an unusual light green, and the closed collar different from any traditional fashion Sylvia knew. Even in the late afternoon heat, he wore a thin black leather jacket as well.

“Sorry about listenin’ in, but I didn’t want to see any harm coming to you ladies,” he said with a polite smile. “But, truth be told, things is actually much worse than what you may have seen on TV. I’m just back from Atlanta, on my way from… points north, but that city is a complete battleground. Mobs were storming the airport just as our lil’ plane cleared the ground.”

He shook his head and pointed at the counter ahead of them.

“If y’all are planning on any interstate driving… well, I hope y’all are heavily armed,” he said with a pointed glance at their luggage.

Sylvia wondered just how much of that she should believe. A two-year tour of the criminal justice system right after getting her law degree had honed her sixth sense for when someone was lying, and this guy did not give her that vibe…

“Next!” The woman from behind the counter called.

“Thank you for the information,” she told the man. “We’ll take it under consideration.”

Sylvia and Roberta took their place at the counter. The woman on the opposite side was huge: at least six feet tall and built as if she could break a man in half. Her hair was a fascinating copper color, falling over her face to occlude her left eye.

“Welcome to Aris Rent-A-Car. To save time, are you paying in gold, silver, or rias?” she asked curtly, in a rich, resonate voice.

So those rumors were true.

“Silver,” Sylvia replied. She heard her sister mutter something with the word “…grandmother…” in it.

“Very good,” the woman replied. “Are you planning on taking the vehicle out of state?”

Sylvia thought for a moment about what the stranger behind them said. They had to get home, dammit!

The large woman pushed a piece of paper toward them. “We have these models at these rates.”

“My company assumes that all vehicles taken out of state will not return. Therefore, this is considered a sale, not a rental.”

From just outside came some odd sounds. Sylvia had been turning at the moment the plate glass window shattered under more gunfire. Having survived two Islamist terror attacks back on Luzon and Leyte, she dropped by instinct.

“Get d–!” she started to yell, but her voice was drowned out by more shooting. “Ooof!”

She was suddenly crushed. Sylvia twisted her head to see that the stranger behind them had tackled Roberta, with his body atop both of them as a shield.

She heard an odd sound, like the charging of an old-style flashbulb… followed by the tall woman leaping over her counter. With an AK-47 in her hand, she took three quick steps then fired several short bursts through where the glass used to be. Following her aim, Sylvia noted a car and a van had pulled up flush to the building’s door. Robbery attempt, I bet. There, just outside the door, she saw the body of the man who’d been in line ahead of them.

In a short lull in the firing, the man who had shielded them yelled, “Stay down!” He rolled off of them, coming to his knees holding a huge semiautomatic pistol.

“How many?” The man yelled.

“Six confirmed,” the copper-haired woman yelled back. “Four are down; two behind the van. Please stay where you are; I will – ”

The grenade sailed into the room and rolled to just a foot from Sylvia’s face.

God! Not like this! Even as she thought that, with a heave she pushed Roberta fully behind her against the lower part of the counter, shielding her little sister with her body.

There was a blur. Sylvia thought it was the counter lady again… but who can move that fast? The tall woman stood where the grenade had been, her posture that of someone who just tossed a ball. There was a huge explosion just outside.

For only the tiniest moment, the woman glanced back at Sylvia, the ghost of a smile in her eye. Then she carefully followed the man outside. There was more shooting, but no further explosions. Sylvia felt Roberta shift behind her and moved slightly.

Glass crunching under his shoes, she saw the man with the pistol walk back in.

“You two ladies all right?” he asked.

Sylvia slid off of her sister, who was trying to catch her breath.

“I think – …think so.” She gestured outside. “Armed robbery? Because this place only takes hard currency?”

He nodded. “Likely. No idea why they don’t have more guards posted…”

“Because I am more than enough,” the tall woman said as she walked back into her business, slinging her rifle over her shoulder. The man laughed.

“Really? Your place is wrecked. If you’d more of an obvious deterrent, then they might have left you alone.”

That was a little rude, Sylvia thought.

But the woman smiled at him.

“You are under the misimpression that renting cars is my business.” Her smile didn’t reach her eye. “We both serve harsh masters.”

The man nodded once. Taking out his phone, he sighed and put it away. “No service. May I use your landline?”

While he talked quietly into the phone, the woman walked over to where the window had been. “Guess I will let Jun fix this later,” she muttered.

“Sis! Sis!” Her sister was still panicked. “What the heck happened?”

“As I said earlier,” Sylvia said to her, “robbery attempt, but with a lot of firepower.”

“What are we going to do now?”

From that price sheet that shocked her so badly before the altercation, she knew they could not afford to “buy” a car; after that, she realized that maybe things were as bad as that man had said… He hung up the phone and turned toward them.

“Right! We’ll have a crew here in a bit to clean up. I’ll need a statement from you two, but after all this,” he gestured about with a smile, “how about we do that over dinner? Ma’am?”

This last directed at the copper-haired woman.

“I’ll be needing a sedan, in-state only.”

“Of course. The price will be…”

He removed something that looked like a badge to Sylvia and placed in on the counter amidst the tiny pieces of glass.

The woman broke into an odd smile.

“For ExComm? Of course!”

What was ExComm? Sylvia wondered.

While the woman busied herself with some papers, he turned toward Sylvia and Roberta.

“By the way, ‘name’s Alan Rupert.” He smiled again. “I’m an agent of the Extraordinary Commission for the Protection of the Republic!”

He glanced out the shattered window and back at them.