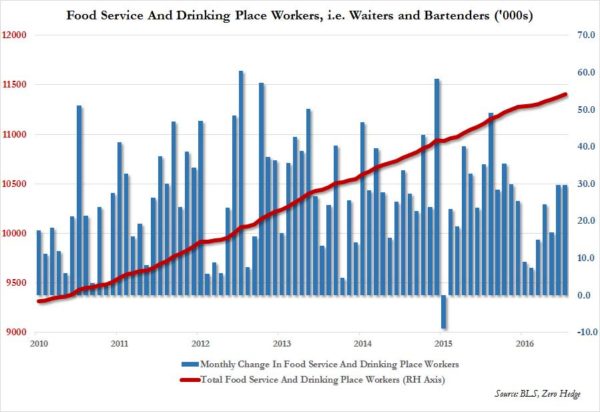 The Leftist notion of money is demand-side: if enough people are willing to borrow money, that makes it valuable, and therefore it must be worth something. What they fail to understand is that easy money becomes reduced in value. Such is the case of the “service economy.”

In addition to burdensome regulations and expensive legal bureaucracy like that created by affirmative action, Leftist governance has given us constant immigration, high costs incurred by unions, and a workforce swollen to twice its normal size by the addition of women. This has reduced the value of the worker and sent manufacturing jobs abroad.

The Left seems consummately unaware of the effects of its actions. For example, unions thought they were winning, but instead like inept parasites, they killed the goose that laid the golden egg much as Leftists have bankrupted the West by marginalizing its founding genetic stock who were capable of the great things that made the West great in the past.

Between the rising cost of labor and the increasing cost of doing business, the good jobs have gone to very few. This year it is the Silicon Valley geeks who seem to be getting paid a shedload of money to write bad code, but not for long. A few people get those law, medical, architecture and business degrees, and everyone else lumps it at entry-level positions.

Where once we were making products for our own consumption, we now make very little and usually have the making done abroad with the money at home going to a smaller cadre of administrators and specialists. This has created a slow-growing, “anti-materialist” economy in which equality is occurring through lack of better options:

Productivity in the services tends to grow much more slowly than productivity in making stuff. If the Fed targets inflation at 2%, then a slowdown in measured RGDP growth (whether accurate or not) will lead to lower NGDP growth, and therefore lower nominal interest rates. Thus the zero bound problem in monetary policy is partly due to the fact that young people prefer eating out and surfing the web, to the kind of auto-centered lifestyle once described by Bruce Springsteen or the Beach Boys.

As with every other Leftist policy, liberal economics result in equal impoverishment except for the new elite who comfortably do not much of anything important but get paid quite a bit. This manifests itself in the typical incompetence of our leaders and experts who seem unable to even coherently address obvious problems. The situation is unstable and cannot endure.

The Dark Side of The Gubmint Gimmedat | Robert De Niro Bashes Trump, But Picked Up 15-Year-Old Prostitutes