Intelligent People Are Marooned In A Vast Wave Of Incompetence 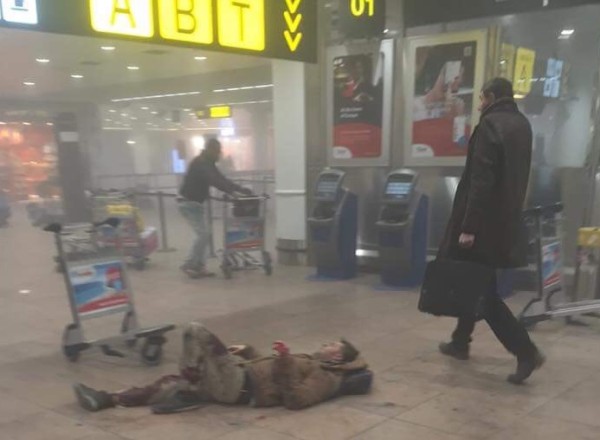 The force of denial in a group is an ancient force. It goes back to our days in the jungle. When a storm threatened on the horizon, the monkeys would go into collective denial. This helped because it was clear that some of them would die, and every one hoped it would not be him.

Denial serves an evolutionary purpose. When the disaster is so huge that nothing can be done about it, having all of the monkeys panic would result in more injuries. Having them do nothing, knowing that casualties will occur, is the best possible outcome.

In our modern form, denial lives on through our willful rejection of any information which does not fit the Everything Will Be Just Fine narrative which makes people into productive workers, happy shoppers and willing voters. This is not government action; it is the act of the people themselves!

Intelligent people — and by that I mean those above the magic threshold of approximately 120 IQ points, where complex grammar and in-depth analysis start — have no idea that they are the world’s only minority. At most they are 15% of any population, and the populations that have more than a handful of them are a minority worldwide and usually under attack by all the others.

As an actual minority, this group should realize that not only are products never designed for them, but they are designed to be hostile to them. Abrasively stupid and simplistic pop music, sugary and salted fast food, bureaucracy that misses the point, education based on memorizing details, and government by the dumbest but least offensive idea are all part of that discrimination.

Today in Europe, and across the world, intelligent people are having a few thoughts in common. One is that the shocking ineptitude of Western governments is appalling and still seems to be completely out of control, and the second is that our elected representatives seem to have something in mind other than our best interests. Both are true and miss the point.

Your elected representatives know exactly what they are doing. They are System People who grew up in education and jobs and other forms of modern tests for competence. They know how to succeed at these tests. You find out how success is measured and achieve that, while cutting out everything else that might slow down that goal. This means that if 51% of the voters will approve of something, you do it.

And you ignore the rest.

Intelligent people — by our definition above — at a generous 15% of the population do not even count. The point is to pander to morons. Like McDonald’s, Coca-Cola and Hollywood movies, democracy aims to make products for morons because they are an easier audience to please. Why spend time and energy on something intelligent, when something stupid will win the day?

This is the whole point of democracy, by the way: to ensure that morons have more power than the intelligent. These morons do not fit whatever stereotype you have seen in media about them. They are normal people, doing normal jobs. They do not have the faculty of judgment or higher reason, however, and so their opinions are always simplistic, “right” in a few ways but wrong in the big picture.

If we look at intelligence critically, we see that it is time-awareness. Smarter people can visualize events farther into the future, even when they are not always correct in their predictions, and are aware of consequences beyond themselves in the period between paychecks. The average person knows only himself and what he wants right now, and the includes to “feel good” about the future direction of his society.

For this reason, whatever is popular is usually wrong. By usually, I mean that out of a hundred times, once it may be right, not that it may be right half the time. This is an important distinction. Most people accept rule by popularity because it seems to be “mostly” right, but in fact, it is rarely so.

Even when the masses pick a better than average leader like Ronald Reagan or Donald Trump, we have to ask: who else was excluded from the running, long ago, who might do a better job? And what about the other people in the system who are “keeping them in check” who will sabotage any realistic action?

The point, intelligent people, is that you are alone in a vast sea of incompetence, ineptitude and selfishness. You alone are thinking the system should work, because if everyone was like you, it might. You alone are “trying to do the right thing” where everyone else is acting for what feels good, right now, and the future is ignored. The crowd is self-deluding because it chases its own hopes, dreams and desires and these have nothing to do with reality.

Nick Land asks a great question over at Outside In. He wonders why the individualistic side always seems to win:

Everyoneâ€™s seen this argument a million times: â€œSo whatâ€™s the problem with libertarianism? The problem is that if you put two groups one against another, the one who is best able to work together will overcome the group of individualists.â€

An example would be nice. Here are the major modern wars of necessity (or existential conflicts) the Anglosphere has been involved in (â€˜winâ€™ here meaning â€˜came out on the winning sideâ€™ â€” conniving to get others to do most of the dying is an Anglo-tradition in itself):

Have I missed any big ones? Iâ€™m simply not seeing the â€œhistory is the graveyard of failed individualist societiesâ€ picture that seems to be consolidating itself as a central alt-right myth.

The answer comes back to awareness of time. In the short term, individualists always win because their ideas are more popular. In the long term, they make civilization collapse. The result of all of the above “wins” is that the individualists have made a society in the West that is moribund and dying out. What is popular is usually wrong. What is individualist is always popular. This is why empires fall and what is left of great civilizations are third-world ruins.

Your great enemy are the clever. These people are not intelligent, but they are able to make intelligent choices within a narrow scope. This is why they succeed at business, academia, media and the like. They displace the intelligent because the intelligent are unpopular, and the clever want to succeed so they want only popular people around them. They dumb down standards and are content with the resulting mess because they thrive in it, being oblivious to longer-term consequences.

They are masters of insincerity because it is the only way to control the herd:

Politicians and celebrities and sportspeople donâ€™t mean it when they say sorry and they donâ€™t care. They just want the baying mob of online morons to go away, and a worthless and insincere apology is the best way to make this happen.

Your society is falling apart from within at the hands of the partnership between the clever and the idiotic. People are miserable and are not having children; drugs, drink and suicide are rampant; all the leaders and even all the business leaders have no judgment skills. This is the long term result of democracy, and before that of individualism or the refusal to rank people in hierarchy by ability, and it means the terrorism will never end.

Until we end it, by ending the domination of ineptitude.

Politics is like betting on horses, but with less integrity | Working class Americans against the world