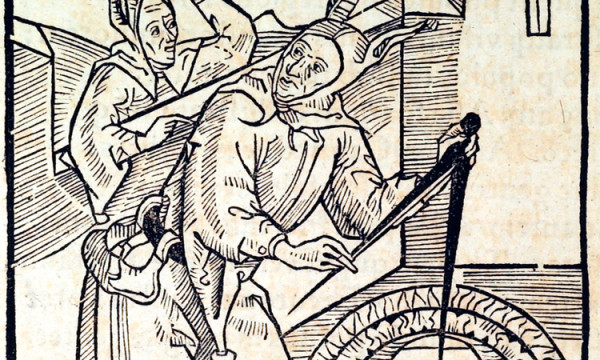 As I predicted, the rehabilitation of nationalism has begun starting with the Jewish people. When the presumptive victims of nationalism find that, in order to avoid the genocide their enemies desired, they must turn to nationalism, the idea of nationalism itself becomes a viable political option again.

In Israel Benjamin Netanyahu swept to victory in an election that the mainstream media said he was likely to lose, surprising pundits and world leaders, but not the citizens affected by the problems he, unlike others, would approach. After his victory, he warned of a typical leftist tactic, which is to use multiculturalism to obliterate the majority culture of a land:

Prime Minister Benjamin Netanyahu sounded an alarm about a large turnout of Arab Israeli voters who he said endangered his rule, comments the Arab bloc denounced as racist.

The prime minister, who had fallen behind his main center-left challenger in polling days before Tuesdayâ€™s election, accused Arab parties of benefiting from funding by foreigners who sought to topple him.

Leftists in the United States use the same tactic. Starting in 1965 with the Hart-Cellar act, they began importing third-world labor, but this law was only the latest in a pattern of expanding the American franchise from “Anglo-Saxon” — German, English, Scots, Dutch, Scandinavian and other related populations with Nordic-Germanic roots — to include those of different traditions, from Greek, Italian, and Jewish to Irish and quarter-Asian Eastern Europeans.

Their goal is simple: to destroy.

Leftism parades itself as a group philosophy based on altruism, but its actual roots lie in narcissistic individualism. The underconfident and mediocre individual fears social judgment much like he fears natural selection, being aware of his weakness. He knows he can play the human game, whether social or credentialist, and succeed, but he fears being put up against a non-humanity reality. A night in the forest, or writing a novel of actual depth, or even understanding himself, puts such a person in a panic. He formulates a goal: remove social standards, so that his behavior can never be compared to an ideal, and through that contrast it cannot be revealed how far short he falls.

When groups of these people come together, they invent endless new theories. Their goal with this is to be a moving target. If you use last year’s term for their issues, or ideals, they will look at you with blank stares. They have moved on. The point is to manifest themselves under as many different names as possible so they are never recognized. This is why leftists have a mania for news and theories.

They also tend toward using justification-based logic. That is, instead of arguing that x action will produce y result, they find a presumed universal good — equality, helping the poor, racial justice — and use it to argue for their plan. On that level, x action is good because it falls under accepted justification y, and whether it achieves that result is irrelevant. This conceals the fact that their goal is not actually to achieve results, but to keep perpetual war going. They want goals that are impossible and paradoxical, because this allows them to force people to accept nonsense, and easily sort the sheep from the goats by letting in only those who zombie-like have accepted the nonsense.

Altruism works because a justification needs an object which is big and unassailable. Once upon a time, it was “the children,” orphans if you could and poor orphans if you were really lucky. After that it was the right of women to vote and do everything else a man could do. Then it was the American Indian, whose empire collapsed before Columbus but whose misfortunes could easily be assigned as a whole (instead of, correctly, in part) to European colonization. Then it was the African-American — formerly “colored” and then “Negro” and finally “Black” — who could be brought along to any party to shock the parents and show how open-minded you were. Then it was the great Hispanic gold rush of 2005-2008, and lately we’ve been on varieties of gays and other sexually non-conforming people. The object of justification must be someone who can be pitied, making the altruist feel both the frenetic strength of righteous conviction and an inner glow at how they are helping the “disadvantaged,” “less fortunate” or “oppressed.” It is a simple psychology.

The goal of the mediocritists — leftists and other Crowdists fit within this category — was to put the majority of Anglo-Saxon America on the defensive by invertedly accusing them of being unfair, cruel and horrible. Like a child lashing out at its parents, this reaction was calculated to invalidate the assumed benevolence behind authority itself: “But you haven’t included everyone!” they shriek, implying that therefore, the authority is favoritist for one party alone. Authority responds to this because without its validity, it looks like an oppressor… and we all remember that ugly situation in France and Russia that ended in streets red with blood (and Reds) and men, women and children being killed for the crime of being more equal than the rest.

The leftist goal is not what they say it is; they in fact, have no goal, only an impulse to destroy. The reason for this destruction is simple. They want to remove authority that can make them look bad. For that reason, they favor big government, which will tell them what to do with millions of little rules but transgressing against those never makes people look bad in a social context. Rather, they get sympathy from others for having been so oppressed. What they fear are social standards like morality, heritage, comportment and most of all self-discipline. What leftists desire is acceptance of all mediocrity, tolerance of all venality, and endorsement of all behaviors so that whatever they are doing goes unnoticed. It is like the classroom when the teacher is gone, where every child is glad to see another child doing something worse than they are. If what the other guy is doing is bad, then lesser offenses will not be noticed or if they are, not punished. This is why leftists want to destroy the majority and replace its standards of behavior with non-standards and a bunch of rules which ostensibly fill the gap.

Since the French Revolution, leftists have been trying to do away with majorities. Anti-nationalism — otherwise known as internationalism, and also: diversity, multiculturalism, multiracialism — became their tin drum to hammer during WWII and they have been beating it since. Whenever someone suggested nationalism, the leftists trotted out pictures of Holocaust victims. Not because they gave a fig about the Jews, but because the Jews could then be pitied. With pity comes altruism, and with altruism comes the magic sword that liberals can use to drive away authority: call it racist and mean and compare it to Hitler. In an instant, it fades away, and the leftists can assume power and hand out lucrative appointments to their cronies, ensuring that their behavior will never come to light. This is the leftist personal goal. They want no oversight, and they want the ability to profit from society by obeying its many frustrating roles that no sane person would tolerate, and being well-paid for their forbearance.

In Israel, the left predicted that Netanyahu could not win without a diverse constituency. In the United States, they now predict the same thing for Republicans:

Ninety-five percent of self-identified Republican primary voters are white. Thatâ€™s among the findings of the latest Wall Street Journal-NBC News poll, as well as that 74% of all Americans age 18 and older are white, a figure that tracks with census data. This means that heading into 2016, the Republican primary electorate is dramatically less diverse than the country overall. The GOP primary electorate is even less diverse than the country was in 1916, when 91% of the voting-age population was white, according to historical census data.

All of this is a smokescreen. The leftists do not actually care about Palestinians or they would be over there taking up arms. They similarly do not care about the African-American, or they would be inviting said people into their elite city condos and gated suburb communities. They could care less on all fronts. What they want is power. They achieve it in the same way every parasite does, which is by destroying the brain of a people — its culture, its best leaders, and its moral standards — and replacing them with oblivion. In oblivion, the host does not notice the parasite, much like a spider with its brain paralyzed by a wasp sting that as a zombie does the bidding of its new master, to its doom.

This leads us to consideration of the future of nationalism. In France with the Front National, in the UK with UKIP, and in Israel with Likud we see that nationalism is rising. With Israel accepting it, we see the pity-justification of the left collapsing. The time is now for nationalists everywhere because people have realized that diversity is a sham, that leftist government is the same kleptocracy it was in the Soviet Union, and that the endgame will be the same as in Venezuela, with people starving while secret police catch those who whisper the wrong slogan. Leftism is death; multiculturalism and egalitarianism are the weapons of leftism. People everywhere are ready to remove the absolute nature of those weapons and replace them with former concerns thought lost: culture, results, responsibilities and moral standards.

World leftism is unraveling much as our kings and philosophers told us it would. It has taken over two centuries, but that is the blink of an eye to history. It takes at least a century to see the impact of any policy in full. In Europe and the United States, people are looking at the chaos that is Brazil and Venezuela and realizing that through leftism and diversity — even if we like and admire the groups being mixed into us — we will be replaced. What comes with replacement is strong leftist government and shortly after that, a series of ongoing collapses resulting in third world levels of disorganization, corruption, poor hygiene and social disorder. Anyone with a brain wishes to avoid this future, while liberals want us to accept it adn go along with because they, as individuals, do not care for the future. They are concerned only with their power right now. What happens in fifty years when they are dead bothers them not at all, and like any true parasite, they are sociopathic in outlook if not in tendency.

Netanyahu was told by all of the “authorities” and “elites” that he could not win with a nationalist platform. He won. Similarly they tell the GOP in the US that it cannot win by appealing to the white people who are 74% of the population, and yet it can win. The majority can and will defend itself once it emerges from the fog of the constant lies issued by leftists and the terms they change every few months to keep observers befuddled. Despite the best efforts of leftists, nationalism is rising and liberalism is falling. No matter how many lies they tell, remember that now is the time to push not for less but more, and to encourage the failed idea of leftism to fall into the dustbin of history where it belongs.

Students Expelled For Disagreeable Opinions | When did the brainwashing begin?