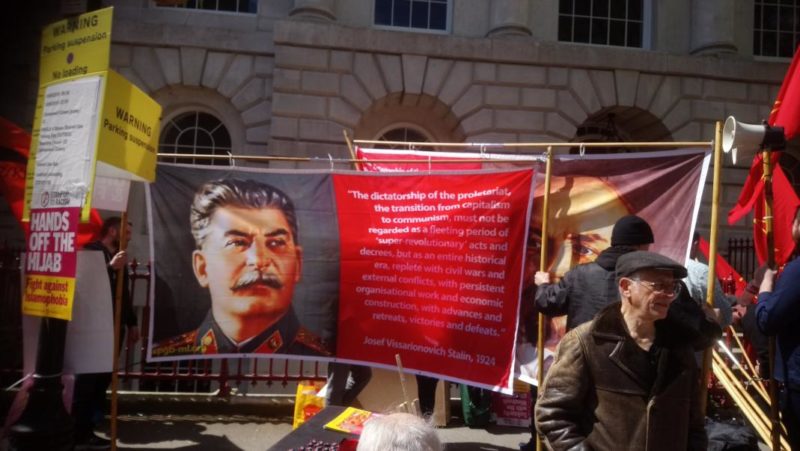 As we enter the age where Leftism, having gained supremacy fifty years ago and failed in all of its promises, prepares to pass on into the dust-bin of history, it makes sense to understand what Leftism is.

On this site, we treat politics as a series of philosophies. Philosophies are explanation for how the world works and what we should do about it. At the core, each philosophy possesses a basic statement which summarizes its approach, and this is why they are distinctive.

It has become common — and that word never means anything good — for people to bloviate on about how they are “neither Left or Right,” which forgets that these two things are distinct philosophies, and like many things at a basic level, indicate a necessary fork in the road of human thinking.

Very few realize that the Right is our continuation of what was there before Leftism, and that while it has been misinterpreted and linguistically slaughtered like everything else in our declining society, its basic philosophy still stands: conserve the best of the past while aiming for inner excellence.

Even fewer understand Leftism. What is Leftism? An encylopedia provides us the roots of Leftist philosophy:

Left: In politics, the portion of the political spectrum associated in general with egalitarianism and popular or state control of the major institutions of political and economic life.

Now we can see the basics of the philosophy: it is egalitarianism plus the idea that the State should enforce it. Continuing our exploration, we ask, “What is Egalitarianism?” Fortunately a specialized encyclopedia of philosophy provides an explanation of egalitarianism:

Egalitarians think, firstly, that unfair life prospects should be equalized. Secondly, that equality is the most or one of the most important irreducible intrinsic or constitutive worth(s) of justice. Thirdly, that welfare should be increased. Fourthly, that justice is comparative. Fifthly, that inequalities are just when otherwise advantages are destroyed in the name of justice. Lastly, that there are certain absolute humanitarian principles like autonomy, freedom or human dignity.

The suffix “ism” tends to mean a philosophy that advocates using its root term as a means of solving problems and leading the best possible life. For that reason, elitism means those who advocate choosing the elite or quality over quantity; socialism denotes using socialized means of production; egalitarianism indicates those who want to use equality as a universal tool for fixing and enhancing society.

In that definition, we have every aspect of modern Leftism. They want to create a Utopia through progress toward equality. They think this should be done by taking from the successful and giving to the unsuccessful. They believe in using the State to do this through Civil Rights programs.

Through that understanding, we can see that Leftists — liberals, communists, marxists, socialists, anarchists, libertarians — are all degrees of the same thing, namely the idea of equality being both a goal and a method of achieving the best possible civilization and lives, although uniquely they see a “perfect” Utopia as possible.

Let us then revisit the historical portion of the definition of Leftism from above:

The term dates from the 1790s, when in the French revolutionary parliament the socialist representatives sat to the presiding officerâ€™s left. Leftists tend to be hostile to the interests of traditional elites, including the wealthy and members of the aristocracy, and to favour the interests of the working class (see proletariat). They tend to regard social welfare as the most important goal of government. Socialism is the standard leftist ideology in most countries of the world; communism is a more radical leftist ideology.

In this we see how egalitarianism translates into reality: since we cannot make the unsuccessful more competent, we must penalize the successful, and have a strong gangster-style government to take their wealth and give it to the less competent. This creates a Darwinian death spiral but transfers power to the Leftist Regime.

Leftism consists of several sub-philosophies, all of which share a common goal of Utopia through progress of equality, which means that all Leftist philosophies are essentially the same, differing only in degree. On the mild side of Leftism, liberalism, libertarianism, and classical liberalism hide their real goal:

Liberalism, political doctrine that takes protecting and enhancing the freedom of the individual to be the central problem of politics. Liberals typically believe that government is necessary to protect individuals from being harmed by others, but they also recognize that government itself can pose a threat to liberty.

…Liberalism is derived from two related features of Western culture. The first is the Westâ€™s preoccupation with individuality, as compared to the emphasis in other civilizations on status, caste, and tradition. Throughout much of history, the individual has been submerged in and subordinate to his clan, tribe, ethnic group, or kingdom. Liberalism is the culmination of developments in Western society that produced a sense of the importance of human individuality, a liberation of the individual from complete subservience to the group, and a relaxation of the tight hold of custom, law, and authority. In this respect, liberalism stands for the emancipation of the individual. See also individualism.

Liberalism also derives from the practice of adversariality in European political and economic life, a process in which institutionalized competitionâ€”such as the competition between different political parties in electoral contests, between prosecution and defense in adversary procedure, or between different producers in a market economy (see monopoly and competition)â€”generates a dynamic social order. Adversarial systems have always been precarious, however, and it took a long time for the belief in adversariality to emerge from the more traditional view, traceable at least to Plato, that the state should be an organic structure, like a beehive, in which the different social classes cooperate by performing distinct yet complementary roles.

Individualism creates egalitarianism because no individual wants to be left behind or restricted in what they can do. As a result, they demand a utilitarian solution: everyone does whatever they want — small exceptions are made for crimes and blatant antisocial behavior — and decisions are made by choosing whatever is most popular.

This comes from the notion of the moral worth of the individual in individualism:

Individualism, political and social philosophy that emphasizes the moral worth of the individual.

If the individual has moral worth, then all individuals must be included and their choices supported, which naturally prohibits the type of cooperation necessary to create civilization. Individualism expresses itself through “rights” by which an individual can reject the need to uphold social standards, customs, and principles.

Although it was called by different terms, individualism arose from the Renaissance, in which “man is the measure of all things” became a replacement for classical ideas of social order. Instead of designing civilization as a structure, it was conceived as a container for individuals which sought to facilitate their desires.

The French Revolutionaries stated as much when they placed the individual at the center of their society, and made it the goal of that society to serve all individuals.

This inverts social order. Instead of having standards and rewarding those who meet them, we make people the standard, and assume that they can be motivated with external carrot/stick combinations like money and the threat of not having money. Over time this breaks down, and so societies turn toward socialism in order to keep their ideology intact.

We fight a war of ideas. The West adopted individualism, then egalitarianism, and implemented them in Leftism because as the most successful society on Earth, it had the wealth and power to take on a crazy notion and not have it fail immediately. Over the past centuries and especially past fifty years however, we have seen that it fails anyway.

For us to displace Leftism from the West, and nothing else will save us, we must get to the root of this dysfunction and remove the moldy old Renaissance™ and Enlightenment™ notions of equality from our thinking. This requires that we get over ourselves, but we have surmounted greater challenges in the past.

No Man Is Illegal | Detroiting