No Man Is Illegal 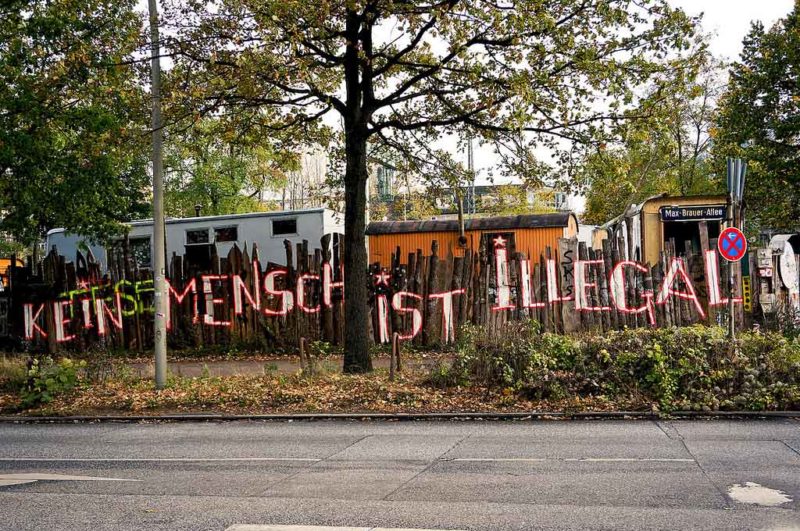 I was one of five men who had spent weeks cleaning up a long-abandoned city building cluttered with trash and debris from collapsing infrastructure. Our project to open a soup kitchen to help support the local community of illiterate migrants and mentally ill homeless people was nearing completion.

While loading chunks of broken concrete from a pile of rubble into my hauling bucket, I noticed a strange luminescent lamp laying on its side. The lamp seemed sturdy and I rubbed off its grime to reveal a golden surface embossed with intricate designs. It rumbled violently and large blue genie burst out before me and began levitating.

With a booming voice he told me that my unselfish actions had freed him from centuries of systemic oppression and now he would reward me with three wishes.

Most people wish for love or world peace but with my first wish I asked to be made immensely wealthy — not for my own purposes of course, as I don’t care much for money, but so I could buy my mom a house and ostentatiously donate to food shelters and asinine social causes that make me feel superior to the hopelessly impoverished.

The genie nodded that he understood my brave wish, closed his eyes, hummed loudly, and a few seconds later many billions were now mine to use for any purpose I deemed ethical. Looking around, it seemed nothing much had changed with the world. Some numbers in a bank account were different and I had stacks of paper and gold sitting somewhere, but everything else seemed normal. I took a deep breath and kept going.

For my second wish, I looked the genie deep in his vacant eyes and told him I wished that no man was illegal. He snickered derisively at me before clearing his throat and looking down to regain his composure. He then continued with the customary gesture of waving his hands magically and acknowledged my command had been fulfilled.

It turned out this time there were a few side effects I hadn’t considered. For example, I had failed to consider that a nation’s only lasting wealth is its people and that capabilities for civilization among populations differ greatly, so borders have historically acted as a bank vault storing the wealth of nations by securing their population. Also, being accustomed to first world standards, I had assumed these were normal and natural throughout the world, which turned out not to be the case at all.

With no man illegal, nations were rendered borderless and those with civilization were immediately flooded by low-IQ high time preference third worlders trying to get to where people had built something good. It was quite a shock to find out 90% of the world is a disaster of poor people with low intelligence barely able to figure out food, clothing, and shelter, and almost entirely unable to plan or organize.

During a sober moment, they looked around at their countrymen, realized they would never develop civilization, and decided the best course of action was to flee their homelands to get away from the mass of people possessing the same traits as themselves, which in the aggregate had created their national conditions of colossal failure.

The previously successful nations that were now borderless quickly lost their unity and shared notion of common sense in the frenzied greed of peasant fantasies where each took as much as they could while shirking responsibilities and accountability. It was looting in slow motion.

This worldwide revolution made history obsolete by removing divisions between the people who developed nations and those who wanted to enjoy what was beyond their station. Developments that took hardy people many centuries to achieve found their nourishing populations replaced by millions of incapables unable to keep civilization afloat. Worst of all, because they knew they were intruding squatters unable to achieve basic standards, the migrants hated the natives for their abilities and openly wished for their downfall.

Wealthy nations became poor overnight and the work of good people was diverted to trying to fix problems created by the imported population. Some natives tried to build a nation within a nation in an effort to preserve their culture and its essential aspects that now struggled under the weight of chaotic disunity. Infrastructure and institutions could no longer manage clean up on the messes of outsiders, and even after sacrificing the possibility of keeping a high level of culture, there was not enough wealth and energy to hold things together. A free fall to a sustainable third world standard ensued.

With my third wish, I asked the genie to restore lawful borders. He snickered again and this time I felt silly from the realization that I needed an appointment at the laser removal clinic to take care of that embarrassing leftist slogan tattoo that seemed so edgy when I was a teenager.