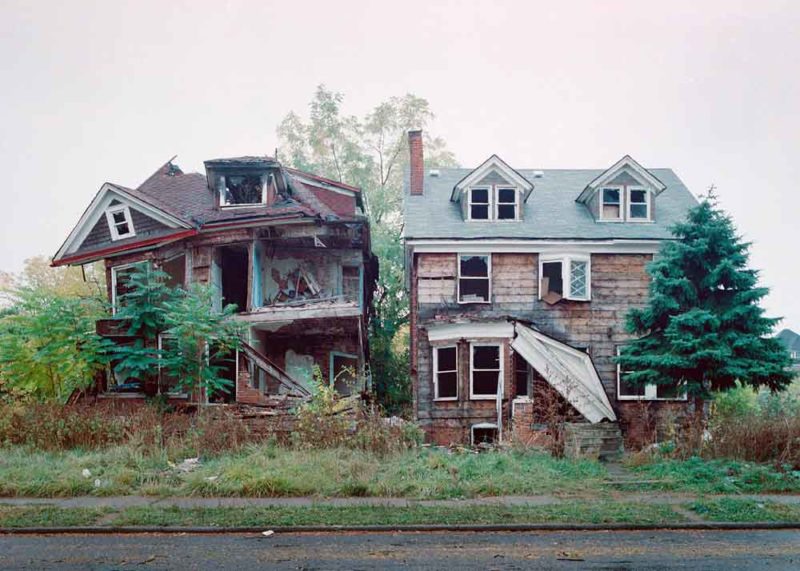 Most people in America and Europe do not yet know exactly how The Diversity Trap works. They worry about crime, terrorism, and the erasure of the way things used to be, but those are collateral damage compared to the real crisis. They should fear instead the process of detroiting.

This event happens slowly and invisibly in the midst of loudly-proclaimed good feelings. A majority group sees minorities move in and reproduce rapidly, and suddenly, the majority becomes the minority. Now the problem takes on a mythic level as it becomes a clash between understandings.

The (former) majority understands diversity this way: our society is succeeding and everyone else is failing, so the best of them can come here and live in safety and prosperity. That makes everyone feel good, and then all buzz together like a great hive, sharing that happy feeling and using the goodwill to make connections.

Minorities understand it differently. They realize what it is to be an outsider, and so they desire more than anything else to be in control. Even more, they know that until they are in control, not just the majority but other minority groups are in control.

They adopt a strategic game-playing outlook: they ally with other minority groups against the majority in the battle for control until the majority is defeated, at which point they try to dominate the other groups. At some point, the territory will become theirs. The instinct to do this lurks deep in humans, inherited from our Simian forebears.

In the meantime, the majority starts rationalizing. Most people simply want to hang on to enough social order for them and maybe their children, if they like them, to get through life with enough wealth to buy away the problems that life causes. They are as reflective as moss, or maybe fungi, in the bigger picture: inert.

Majority rationalization takes the form of looking at “problems with diversity” instead of “problems of diversity.” They take diversity as a given and assume it will continue, so they focus on fringe behavior as a target for their ire. Usually they look at crime.

Your average white person, for example, knows at some level that certain minority groups commit a lot of violent crime. They realize that this is not done by all of the group, so they complain about the visible signs of failure in the hopes that these will be rectified, but they do not look at diversity itself and see it as fatal.

This enables them to say to themselves, in effect, “Diversity is great, if it were not for this one group that has too many criminals in it.” This enables them to keep believing in diversity with what amounts to a series of footnotes after it complaining about inconveniences and personal fears.

They do not look at diversity as a whole, and in so doing, they ignore the actual threats and focus on symbolic ones because symbolic threats are easier to share with a crowd, and we live in a time of herd dynamics. Their children do the same in order to appear brave, defiant, and revolutionary to their peers.

All people caught up in diversity forget what we might call The Golden Rule:

Every ethnic group acts in its own interests alone.

This applies to both minority groups and groups within the majority because the nature of being a majority is to be unaware of the need for identity, and thus to be divided into lots of little groups by class, religion, culture, politics, region, and social factors.

Majority subgroups act toward their own advantage. They gain social status by appearing brave and fearless about diversity, so they compete with each other to be more diverse. Minority groups recognize their own self-interest in identity and eventually, conquest.

Until the numbers at the polls shift, no one sees the real dark side of diversity, which is detroiting. Detroiting happens when the minorities ally together and have enough numbers to vote out the majority interest. At that point, the city or state in which they live takes on a different character.

Things that concern majority people — infrastructure, high culture, education, future investment — never win elections ever again. Nor do candidates from the majority or who defend the majority. What wins are wealth transfer arrangements because they give power to minority groups.

Many American cities are about to unleash bankruptcy on themselves as they try to pay off public-sector pensions that can never be fully funded. These are often generous enough to, after twenty years of job attendance, pay an individual most of their salary for the rest of their lives. Often individuals get two such pensions over their working careers.

Pensions of this nature make minority voters happy because of affirmative action. Government hires minorities in an attempt to be “colorblind” and then refuses to fire them for low performance. This town, for example, is full of people who are not attending the jobs they are paid quite handsomely for.

Minority-majority voting groups spend most of their effort on electing candidates like them and asserting symbolic issues of identity. This enables them to gradually make the community theirs. They change the names of schools, pull down statues, take their pensions, and have as many children as they can.

In this way, every minority-majority city enters a death spiral: what made it great will not be replenished because it is of the majority, but the voting majority of minorities will never approve of anything that benefits majority people.

This means that necessary projects, just as is the case in the third world, will be ignored while crowd-pleasers are pursued. People love free stuff. They love the lottery of the pension system where some people get jobs where they can gossip all day or just not attend, and they still get a lucrative retirement package.

As you read the news and see that both major cities and wealthy states are facing debt bombs created by their pension systems, you may find it interesting to include affirmative action in that analysis. Pensions are an elaborate form of welfare in contemporary America.

When your town, city, or state is detroited — meaning that minority groups combined make up the majority of the vote — nothing will ever go well again. Your government, relying on the “how many warm bodies?” calculus of democracy, will always choose the trivial over the real, and do nothing about actual crises.

Even more, it will touch nothing that is perceived as benefiting the majority group, who in the US and Europe are the founding European-descended peoples. Their neighborhoods will be ignored; their needs will be suppressed; their futures will be destroyed.

This is how The Diversity Trap works. The damage of diversity does not come from the other groups, but from the political infighting that results, both tearing society apart and creating a permanent state of ambiguity, distrust, and alienation that makes unity impossible.

Leftism = Egalitarianism | If Everything Is Going So Well, Why Are Europeans Drinking Themselves To Death?