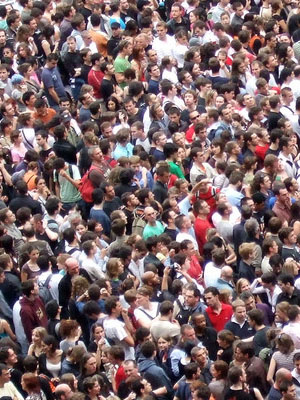 All my life I have been confused by â€œgroups.â€ How does one form a â€œgroup?â€ What motivates people to form groups? When is a group officially a â€œgroup?â€ What do groups do? When I was a kid I assumed this would all make sense when I was grown up, but my mind still reels.

They say that the Eskimos have many different words for snow; the modern West might be in the same situation with the word â€œgroup.â€ There are organizations, boards, committees, institutes, foundations, assemblies, councils, bodies, companies, leagues, societies, and so on. Where does one group end and another begin?

A tribe, a battalion, a posse, the cavemen hunting a wooly mammoth, even a country that defines itself by a border is still on a human scale. You were in that group either by birthright or in order to accomplish a goal by playing a role amongst your equals. There was most likely something along the lines of an initiation, oath or pact.

However, things become monstrous when the group grows nebulous like the Hydra. These groups are not exclusive, but inclusive, and the goal of the group is merely to perpetuate itself. A person might join a group like this so that they can include it on their rÃ©sumÃ©.

The group grows â€œarmsâ€ or subsidiaries and adjuncts; there are oversight councils, subcommittees, â€œwatchdog groups,â€ and review boards. It is akin to the assignment notebook for the assignment notebook. The group was not able to keep itself in check; therefore we have created another group with the express purpose of keeping an eye on the original group. There are so many checks and balances perhaps we need a check and balance hedged against the checks and balances.

Groups inevitably have vague names and/or vague mission statements: The Research Institute of Policy Research, The National Foundation of America, The Human Council, The Society of Women Citizens, The Organization of Non-Profit Organizations, The Decision Making Review Board, and The Ministry of Silly Walks.

What do these groups do? Well, they get together and have meetings. They elect each other to various positions within the group. They work with other groups. They raise money and â€œraise awareness.â€ They give money to some people and receive money from other people. They advise and they are advised. They read reports. They look at pieces of paper with statistics and data. They prepare reports with their own statistics and data. They distribute information, give grants, shake hands, and smile for the camera.

We shall endeavor to work with The Society of Women Citizens by creating a special committee comprised of members from our group and from theirs. We will gather data and create reports to be distributed amongst other groups so that they may better understand the status of whatever the report may pertain to. It is my hope that this alliance will only strengthen our reputation as an authority in our particular field of expertise.

The bureaucracyâ€™s strength is in its ability to replicate itself. But therein is also its weakness. If something becomes stretched thin, it is all the weaker at any one point. Through sheer use of synonyms, repetition, and vague language one sees clearly that there is no substance underneath. It is akin to incantation or sorcery.

Let us understand the bureaucratic structure for what it is. This is an excerpt from a real newsletter I have on my desk. I have taken out the names for anonymity and it conveniently reveals itself as the fluff that it is.

Grant from the X Foundation, a component fund of the Y Foundation. Shortly after Person A, our newest board member, attended her first board meeting last December, she arranged a meeting on our behalf with Person B, president of the Y Foundation. The Y Foundation staff members, with their deep commitment to the future of Z, were glad to learn more about M and its services. This meeting quickly resulted in a visit to M in late December by Person B and Person Q, the foundationâ€™s vice president for grant making and community initiatives. During the visit, we had a chance to describe the important role the X Foundation had played when Organization M began in the early 1990s. That first donation helped make our organization a reality. Person B and Person Q invited us to apply for a new grant from the X Foundation, which is now a component fund of the Y Foundation.

I mentioned The Ministry of Silly Walks. Consider also the â€œSpamâ€ bit by Monty Python. For those of us who want a different angle of resistance and challenge to the â€œsystem,â€ we might call this the Flying Circus strategy. Rather than explaining things through rational analysis, we raise the stakes using the bureaucracyâ€™s own language and way of thinking. This goes hand in hand with the technique of anamorphosis, civil disobedience, and parallels my hypothesis that reality is best understood as mystery. This is how confusion, madness, and the absurd, far from being defects and wrong turns on our path to supposed quintessential knowledge, reveal reality for what it truly is.

Movements in the forest | How conservatives differ from liberals