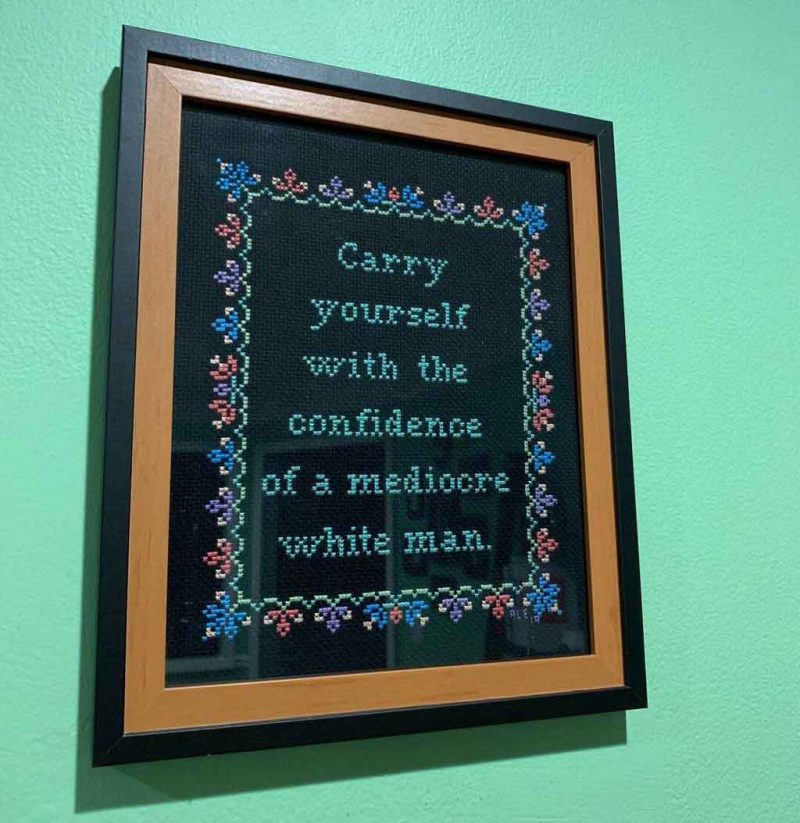 The Feminine Ceiling is a phrase I have coined to describe an unacknowledged barrier to human (and organizational) performance. The term was inspired by the politically correct token of the “glass ceiling”:

an unacknowledged barrier to advancement in a profession, especially affecting women and members of minorities.

“the first female to break through the glass ceiling in Engineering”

However, despite referencing “feminine” the meaning relates to a woman who is in a situation where becoming a feminist would prevent actual performance. Feminism denies what women do well, and therefore, sends women off on a quest for a false goal.

In order to perform, a woman must recognize who she is and what she does well. The feminine ceiling is of course unseen because the current environment incentivies and advocates the opposite, where women seek to break the glass ceiling to achieve male performance parity.

This requires that they cross another kind of glass ceiling, one formed of knowledge, towards becoming proficient in jobs that fit their skillsets. For example, women make better line managers while men are better project managers.

The point is not that women cannot perform, it is rather that being deluded will limit their performance; feminism justifies these limits and therefore erects a barrier to normal high performance. This is in-line with Dark Organization theory where performance will be reduced to 20% without logical awareness of it because the behavior is “justified” by resentment narratives.

Feminism perpetuates non-performance by lying about the nature of women and providing a scapegoat for their failings, causing them to never evaluate their acts in order to improve. Even when feminists succeed, their denial causes them to carry an ideological load that affects performance.

Men can also be feminized, such as “beta” males who are bad performers because of their perceived low energy levels. Studies demonstrate that the absentee father as a real problem affecting society, not only because the father-figure is missing, but because feminist mother raise boys.  Feminized parents transfer bad performance to their children.

Much as women must become women again in order to reach their true potential, men must remasculinize themselves in order to achieve high performance. This means that groups must encourage an institutional culture of accepting the sexes as they are and pushing each individual toward a role in which he or she can succeed.

In groups however, the point of reference becomes culture. Culture can be measured using six dimensions, one of which is “Masculinity/Femininity.”  Below is a comparison between the United States and Tanzania using this metric:

With America having a high masculinity and Tanzania a high femininity, the interpretation is as follows:

A low score (Feminine) on the dimension means that the dominant values in society are caring for others and quality of life. A Feminine society is one where quality of life is the sign of success and standing out from the crowd is not admirable.

The fundamental issue here is what motivates people, wanting to be the best (Masculine) or liking what you do (Feminine).

In other words, an institution can have a feminine ceiling too; a low-performing group may be focused more on liking what it does, in shades of dark organization theory, instead of wanting to be the best. Currently Tanzania is 116 on the Global Competitiveness Index and America is first.

Essentially this particular difference in cultures would make assimilation or even integration between these two groups impossible. Attempts to “integrate” these different cultures have only resulted in parallel societies.

The same applies to the current US society where a large percentage of previously masculine citizens (male and female) have already been feminized to the extent that feminine groups are invited in from other countries such as Somalia.

Where this glanced-over, politically correct problem would otherwise never have been an issue, it now represents itself inside the United States Senate and has become an obvious performance risk to Western Society, because “feelings” count.

As we move forward, we can see that the only way to break the feminine ceiling is for men to be men and women to be women, and us to recognize the inherent inequality but complementary nature of those roles. That might be a bit much for today, but not tomorrow.