Circle of Treason: A CIA Account of Aldrich Ames and the Men He Betrayed by Sandra Grimes and Jean Vertefeuille (2012) 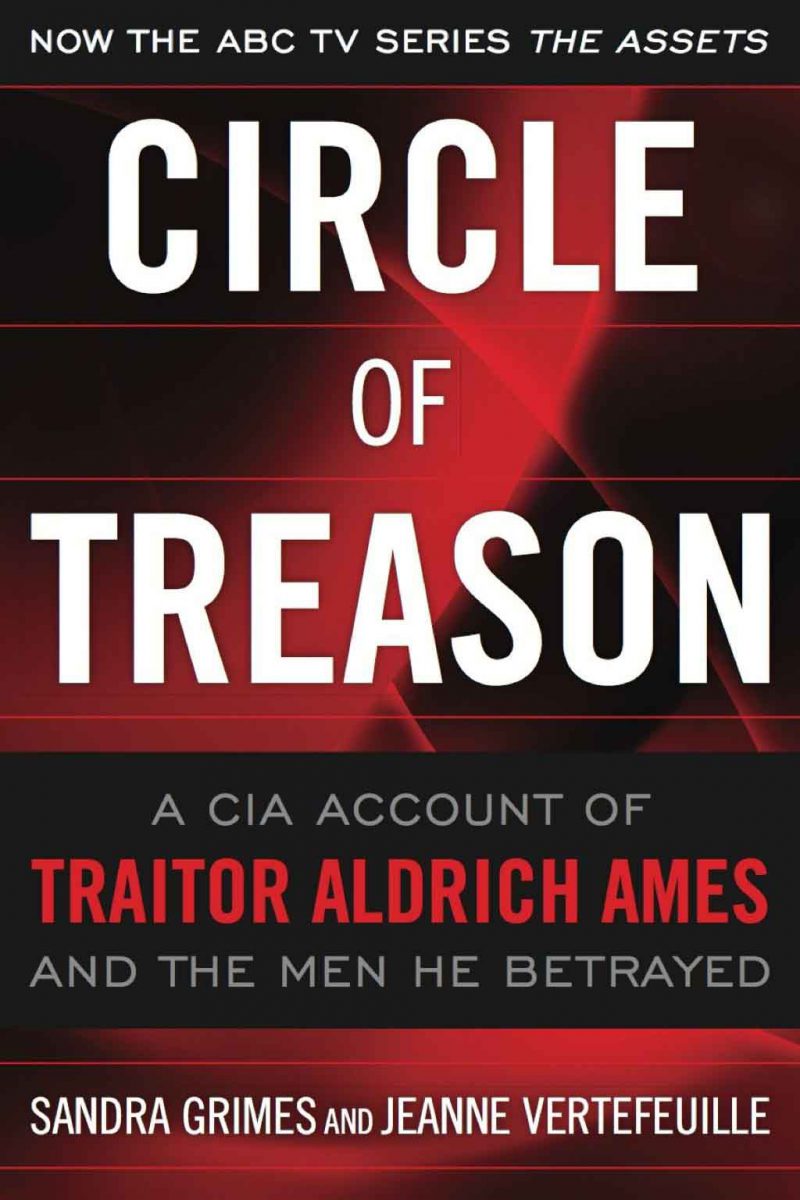 Circle of Treason: A CIA Account of Aldrich Ames and the Men He Betrayed
By Sandra Grimes and Jean Vertefeuille
264 pages, Naval Institute Press (2012)

Almost no one remembers the Cold War now. For them, history jumped from the primordial soup straight to the 1960s, when the people currently ruling us took over and implemented their hybrid Communist Libertarian ideology (sometimes called “market socialism” or “neoliberalism”).

This allows them to focus on what happened between the 1960s and 1990s in the West while ignoring the fact that, in southern and eastern Europe, Communism and socialism were collapsing during that era due not to foreign intervention but their own inability to feed their people and keep them reasonably happy.

Dropping into the midst of this, Sandra Grimes and Jean Vertefeuille introduce a narrative of hunting down one of the most destructive double agents run against the West, Aldrich Ames, later made into the TV series The Assets.

A double agent pretends to work for one side, but secretly passes documents to the other. Ames worked for the CIA, but in exchange for about two million in cash, passed secrets to the Soviet KGB which resulted in the death of over a hundred people working for the CIA behind the Iron Curtain.

Fortunately, these former officers prove to be good writers, spanning styles with a forceful narrative that would be equally at home in a lengthy field report and an article in The New Yorker or The Wall Street Journal. This makes Circle of Treason: A CIA Account of Aldrich Ames and the Men He Betrayed both easy and fun to read.

It is difficult to comprehend that a person would take this drastic step, but the psychological studies of Americans who have committed this crime show that they have one factor in common: narcissism. In their minds, what is important is self-gratification or self-interest. In order to achieve their selfish goals, they generally require substantial sums of money. That they are betraying their colleagues, their organization, the lives of other people, and their country as a whole seems not to weigh in the balance. (199)

When Ames began passing secrets to the Soviets in 1985, he unleashed a series of consequences. American networks rolled up as double agents working for us were arrested, tried, and shot in the garden of Lubyanka. Volunteers to spy for the Americans within the Soviet Union dried up, and our allies pulled back from collaboration.

This launched a series of events that had the CIA inspecting its own procedures. Their first task became figuring out whether they had a physical penetration, intercepted communications, or a “mole,” someone leaking secrets. Unfortunately for them, some of each were going on at the time.

In Moscow, Marine guard Clayton Lonetree admitted to allowing the “Uncle Sasha” of a young lady that he was dating into the American embassy, causing the staff to pack up everything they had and move it all out so that they could comb the building for bugs. American communications had been intercepted and deciphered in the past, so test messages were sent but no leaks were found. This meant that they had a double agent in their midst.

Grimes and Vertefeuille made a list of all of the people who knew about all of the agents who had been revealed by the mole in the CIA, and this gave them a list of almost two hundred people which they whittled down further, eventually settling on Ames as they noticed that despite a reckless lifestyle, he was not in debt, but instead buying houses with cash and living very comfortably.

Compounding their situation, other double agents were active in America at the time, specifically Robert Hanssen and the still-unknown person who ratted out Oleg Gordievsky, a Soviet officer who was a double for the British.

As Plato predicted, open democratic societies tend to make weak people by driving out the strong; authoritarian societies, like the Spartans, make good warriors but this rewards only strength and excludes those with concern for the health of the civilization as a whole.

Perhaps the most important double agent for the Americans, Dmitri Polyakov, noted this in his conversation with his American handlers shortly before he was betrayed by Ames, arrested, executed, and buried in an unmarked grave.

The Russian people were slaves of their leaders, helpless and alone in the world. Of equal significance, the Western world in general and the United States in particular were not a counterbalance to Soviet power. As viewed by Polyakov, our military was weak, our leaders lacked fortitude and, of greater consequence, were bound by civilized rules of behavior. His were bound by none and Polyakov concluded that the Soviet Union would win the Cold War.

Polyakov never championed our causes of freedom, justice, and democracy. Quite the contrary; these were lofty ideals that did not matter to him and his daily life. On the few occasions when we raised the possibility of defection to the West, he quietly but forcefully ended the conversation. Polyakov was born a Russian and would die a Russian. (57-58)

Interestingly the team finally zeroed in on Ames when they performed an informal poll that allowed each team member to weight five names with a score determining how likely they seemed to be as candidates for the mole. Ames eventually topped the lists, and Grimes and Vertefeuille directed their team to begin surveillance.

Eventually, they observed enough of Ames’ tradecraft — the techniques and habits he used to communicate with his handlers so that he would not be revealed — to get hard evidence of his spying. At that point, they could build a timeline of his activities.

Sometime in 1985, Ames had approached the Soviets with an offer of service in exchange for money. His second wife liked to spend lavishly, so Ames began passing over bags of CIA secrets in exchange for bundles of cash.

Ames and Chuvakhin would lunch periodically. Each would carry a shopping bag to the lunch, and the bags would be exchanged. Ames’ bag would contain classified documents andperhaps an operational message for the KGB; Chuvakhin’s bag would contain press handouts from the Soviet embassy, plus perhaps money, Russian vodka, and a message from the KGB. After each lunch, Ames would write up an official CIA communication for the FBI and for CIA’s Washington Station, with a ho-hum account of the non-operational aspects of the meeting. His aim was to make the contact seem mildly worthwhile, so that he would not be told to break it off, while at the same time not making it sound so promising that it would attract undue interest. (201)

This went on for nine years before the team was able to identify him, gather enough evidence to prosecute, and bring a case against Ames. During that time he contributed to the death not only of American double agents in the Soviet Union, but many others who were brought under Soviet control as a result of the resulting American intelligence failures.

Circle of Treason: A CIA Account of Aldrich Ames and the Men He Betrayed reads easily and keeps an uptempo rhythm which makes it easy to read in one sitting or ten. It makes a more interesting read, sort of like Peter Wright’s Spycatcher, because it follows an adventure book framework in telling the story of the pursuit of a goal, not trying to make a point to history or study the process through theory.

For those who want to know why our world ended up as it has, however, this book offers up insights into the struggle not just between nations, but within nations, as people attempt to find what works and the resolve to defend it.