Why The “Yellow Vest” Protests Are Important 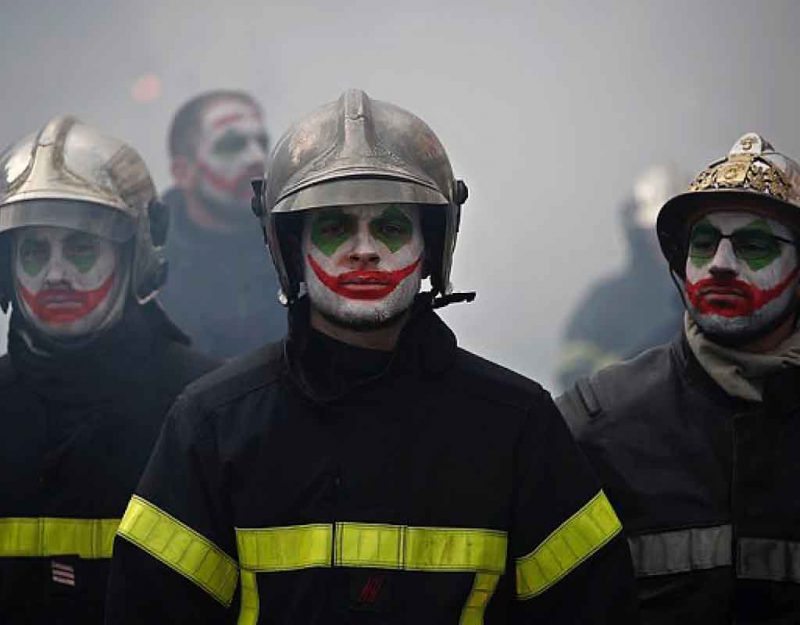 Attempting to write for the far-Right runs into a wall, namely that most people on the Right — underground or mainstream — remain in mental obedience to the symbol of equality. Equality is a social symbol that makes other people like you, so it is a powerful tool.

Like so many modern tools, however, it turns out to have highly destructive side effects. Glyphosate kills weeds well, but might also cause brain damage and cancer. Equality makes a social group like you, but then the group goes insane.

I remember sitting in class, bored as usual, wondering about how the Roman Empire fell. The history teacher could give us traits that increased as the collapse intensified, like bureaucracy, diversity, and military expansion, but could never explain the root cause.

Individuals can go insane, but under the pressure of socializing, human groups follow insanity because it is popular because it appears less threatening than the parts of reality that they fear. The insanity does not substitute for all of reality, only avoids the scary parts.

As a result, this new replacement reality lacks many parts that it needs, and as such, is incoherent and prone to cause self-destruction. However, once it has become popular, anyone who speaks out against it is seen as threatening the group and their new excellent future through an illusion.

Consequently, no one will criticize the illusion, and the whole group falls into obedience to it, allowing themselves to be controlled by whoever masters it, which means that no “stop” button exists. If the ideology fails, they will simply re-apply it because they have effectively decided to censor, ignore, and filter out any facts or notions which do not fit with the illusion.

Imagine a group of people in a car who decide that going north is the right course of action. They will not hear from anyone who advocates a direction that is not-north, no matter what that direction is or why. Soon a cliff edge approaches, but since mentioning not-north is taboo, no one will say anything until the car has gone over the cliff, at which point it is finally socially and politically safe to mention that the illusion was in fact not reality.

Political correctness works by the same method. You cannot mention anything other than that the existing assumptions about human equality are totally correct with no exceptions or nuance. Therefore, anyone who is not affirming the Narrative is removed, and everyone else falls into line because approval seems unanimous.

Consider the situation in the small. In a friend group, one friend has a bad marriage. This cannot be mentioned without upsetting them, so the group adopts a taboo on mentioning this. Everyone else, however, can acknowledge having marital problems. In a few years, the group will be taking marital advice from the friend with a bad marriage, since everyone else has visible marital problems.

Now consider what “equality” means. Equality means that good equals bad. After all, they are equal, as are all the degrees inbetween. Egalitarian movements start because people in lower castes become irate at their lack of power, status, and wealth.

However, when bad is given good, you get more bad; when good is given good, you get more good. Egalitarianism breaks this fundamental formula and replaces it will giving good to both. Egalitarianism consequently always benefits the dishonest, unproductive, and deceptive who will take advantage of it without a moral qualm, while disadvantaging the honest, productive, and forthright who will attempt to do right at higher cost to themselves. Over time this causes them to become existentially miserable, since the good work on a treadmill to support the bad, and they start dropping out, dying early, and failing to reproduce. This is the death-cycle that ends a civilization in its final, third world levels of disorganization and atomization state.

Egalitarianism takes several forms, but we experience two most commonly: economic egalitarianism, or socialism, and social egalitarianism, which is a cross between anarchy and libertinism that accepts low-caste behavior as normal and therefore devolves social standards to that of the third world or pack animals (the two are very similar).

Both of these have created havoc in the West. Social egalitarianism has destroyed the family, ruined social order, weakened institutions and morals, and converted our population into emotionally isolated zombies who wander about in atomized ennui.

The following chart tells you what you need to know about economic egalitarianism in the context of the “yellow vests” protests, when we look at social spending as a percentage of gross domestic product: 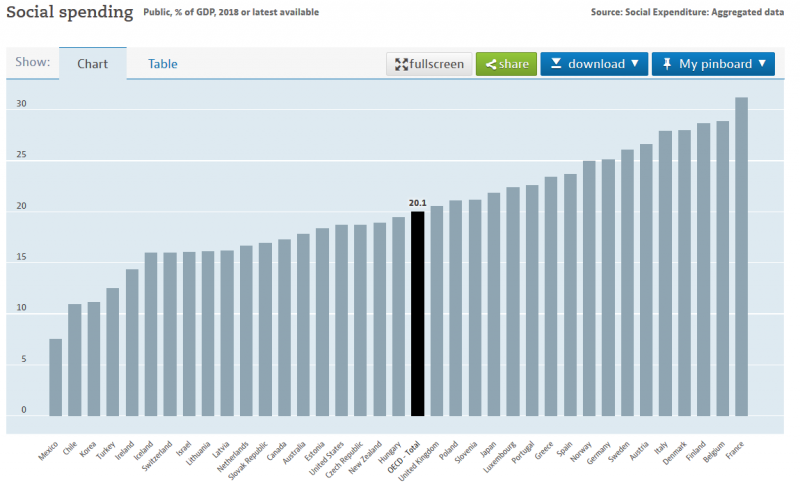 France spends more of its nationwide production on social programs than any other nation. This requires high taxes, which in turn raise costs because everyone in the supply chain is taxed and passes those costs on to the next level.

In other words, if you buy a banana, the grower is paying more tax, but so are his employees, lawyers, accountants, and stockholders. They all demand more money. So are the transporters, grocery stores, wholesalers, and storage facilities. Add up all of those, and that gets added on to the price.

Directly, you may not pay much tax per banana (or lime) but when you add up the higher costs to everyone required to bring that to you, it becomes substantial. Similarly, salaries decrease as businesses require more money to pay for taxes. Only those at the top come out unscathed because they have the money to pay extra taxes, but this also instills in them a mania for profit so that they can accumulate enough money so that they do not get dragged down under the wheels of the tax-based system.

Our modern liberal democratic market socialist states are driven by taxes because much of their economies relies on government to create jobs, either directly or through regulations. Every paper-pusher gets a role; affirmative action and feminism also come into play, since governments use their own hiring to enforce these ideological objectives.

Demand-based economics — the economic theory of the Left — holds that this is a good thing, and we can “prime the pump” indefinitely by having government redistribute money to bureaucrats, the impoverished, women, and ethnic minorities. This requires running high debt and using that debt as part of the value of the currency.

That system in turn demands constant growth to outpace the damage done by taxes. Where in the past you could have a stable economy and weather the vicissitudes of the markets with relatively little crisis, in the post Great Depression economic systems of the West, you either constantly add value or you sink, which incentivizes the creation of false value through spending and buying for the sake of doing so. Add to that the wealth redistribution agenda of the Left, and you have the basis of consumerism: wealthy parties pay taxes so the money goes to the masses, who then buy tons of useless junk and drive up the value of the economy, so that the holdings of wealthier parties are worth more.

The “yellow vests” just want normal lives. They will never get that under a state which has entitlements programs. Instead, they will see more promises from government while their hope of ever owning anything of value, or escaping the system before they are thoroughly aged, dissipates entirely.

Liberal democratic market socialism will go out the same way that the Soviets did, through economic entropy brought on by too much money moving around with too little solid value behind it, just slightly slower. In the end, that will not matter much at all.