Why Rome Did Not Notice It Was Falling 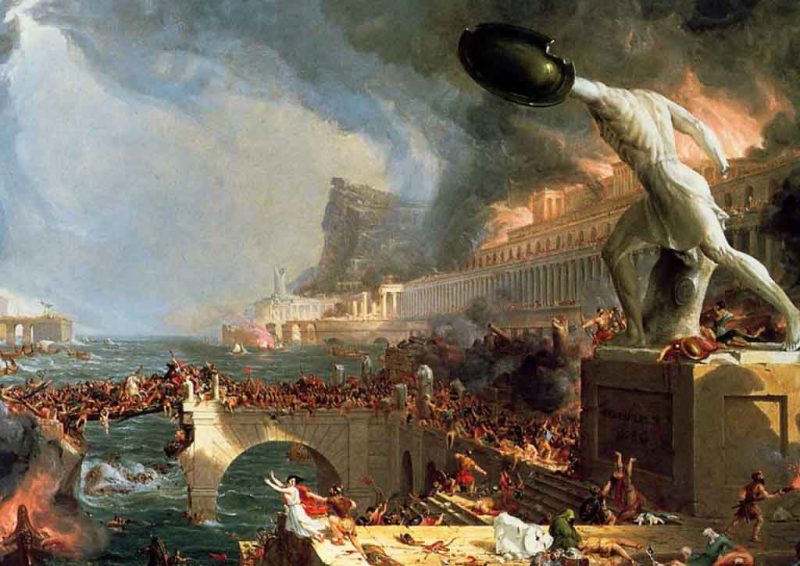 In history class, back in the day, you may have heard about how Rome “fell.” Your teacher probably clarified this by saying that Rome fell into decay, and then finally was overwhelmed by invaders centuries later, despite parts of it living on.

Children always ask the obvious question, which is, “How did they not notice they were falling?” The answer as always is that some did, but most did not care or had written off failure as a natural part of civilization, much as in our own right now.

People form little cliques that share delusions so that no one feels like an outsider; misery loves company, as you may recall from the words of your elders. These cliques can take over a society, and at that point, it notices nothing outside of the story they tell about it.

Normally it goes like this: a civilization becomes prosperous because of good — perhaps too good — leadership. It beats back threats both natural and human, organizes itself to be efficient, and now can support more people.

At this point, society becomes a form of insulation or insurance against the consequences of our actions. If you forget to set aside food for winter, you can take out a loan, or get a job, and earn money to take care of yourself. You can survive without thinking.

Consequently, the group of people who could not exist without civilization explode in number. In nature, they would have found their numbers limited; with the advantages of civilization, those least likely to sustain civilization benefit the most in terms of reproduction.

These are welcomed most by those in the middle. Shopkeepers, dressmakers, entertainers, doctors, lawyers, and others who sell goods and services to the general public find themselves delighted by the thought of more customers.

In time, government gets in on the situation and starts making welfare payments to those who are poor so that they, too, can purchase lots of stuff. Others figure out that the more they hire in the big businesses, the more that money gets spread around.

If you look at such a society, you will see lots of happy faces, which should warn you because most people are unaware of anything beyond a few details, and when they are happy, it means that they are getting unrealistic reward at the expense of something else.

Imagine a business where a young social justice warrior edits the employee database so that everyone gets a doubled paycheck every two weeks. Assuming no one tells, each thinking that only he is getting the surprise bonus, there will be lots of happy faces, right until the business goes bankrupt and everyone gets fired.

When a society gains wealth and loses the caretakers of that wealth that keep it from being broadly distributed, fools have too much money, and their spending power causes those who should know better to rely on them as customers.

The society has essentially become a circular Ponzi scheme, where it pays out money in order to get more, having effectively borrowed from tomorrow in order to have more for today.

Such societies always embrace status equality, or that idea that instead of having a hierarchy, everyone is equal except for those in centralized control who dole out the free money and run the police state that keeps people from misbehaving too much.

During societies in this state of decline, the illusion of being “good people” comes about. Those who support the idea of equality find themselves gaining social popularity, therefore more customers, therefore winning at the consumer economy.

People of this nature are explicitly anti-realistic, meaning that they reject the cause-effect logic in which we look at what actions we took, how those turned out in reality, and judge those actions by the results achieved in reality.

Instead, they want us to judge by social intent, or how our actions were designed to make others feel. Actions no longer aim at results, but at symbolic goodness that brings in more customers.

Knowing to some degree that the free money raid cannot last forever, these “good people” (German: gutmenschen) engage in a fiction that their actions have no consequence beyond the immediate.

This bourgeois mentality announces itself any time you hear people say things like, “Just work hard, go to church, and pay your taxes, and everything will be alright.” They ignore the need to keep society functional or invest in the future.

All that matters is consumption, right now. In the bourgeois view, anything but your own desires in your own lifetime does not matter, mainly because this is what you tell customers. They ignore the long-term in favor of celebrating the individualistic and short term.

Eventually this bourgeois attitude leads to something like Communism. Individualism creates a rowdy and selfish populace, and those demand free welfare and entitlements, but because of the high degree of abuse, government must oversee this to avoid exploitation.

As a result, government grows more powerful until the point that the bourgeois mind rejects free markets entirely, and wants simply to have government keep order so that business can continue, as it always seems to especially under these theoretically cash-free states.

Soon things have grown bad, but only a few percent of the population can figure it out. Simpler minds understand a strong state and free stuff; they do not understand more nuanced views, and so when people talk about alternatives, they laugh and walk away.

This means that the only people who understand what is wrong — that Rome is falling — will be shouted down, beaten up, and killed by those who are incapable of understanding that any option exists.

All human populations demonstrate the bell curve, or a difference in abilities with most people clustered in the middle, but the middle is not complex enough to understand what is wrong or what might be better. The Dunning-Kruger Effect ensures that.

Instead, the society falls into a group pathology of denying that anything is going wrong in order to avoid being clobbered by their fellow citizens, and affirming that everything is going well as a means of becoming popular and selling stuff to others.

This affirmation that all is going well forces them to embrace the idea that “decay=good,” since all is in decay, so they endorse all forms of breakdown. Perversity, corruption, criminality, stupidity, time-wasting, incompetence, and genocide must all become “good.”

In the end, socializing wins out over the type of clear thought that comes from lone exceptional individuals. The herd triumphs in having finally achieved its great Utopian victory, since no one can tell them they are wrong, just before the end.

When the barbarians arrive at the gates, it is too late, and has been too late for a long time. The strong minds have all left or died out. The fearful herd, cowering in darkness, calls out for its guardians to protect it.

However, those saw the society for what it was, ignored its face value and looked into its essence, and got paid to do exactly what they promised, none of which included “saving a dying regime from itself.”

As a result, they are long gone, and the few left who understand what must be done are not sufficient in number, not to mention barely motivated to save the group of craven, selfish, parasitic, and quivering free riders that have taken over.

Thus the barbarians sweep in and easily conquer the fallen empire, which died by its own hand.