Why Does Democracy Elect Whores? 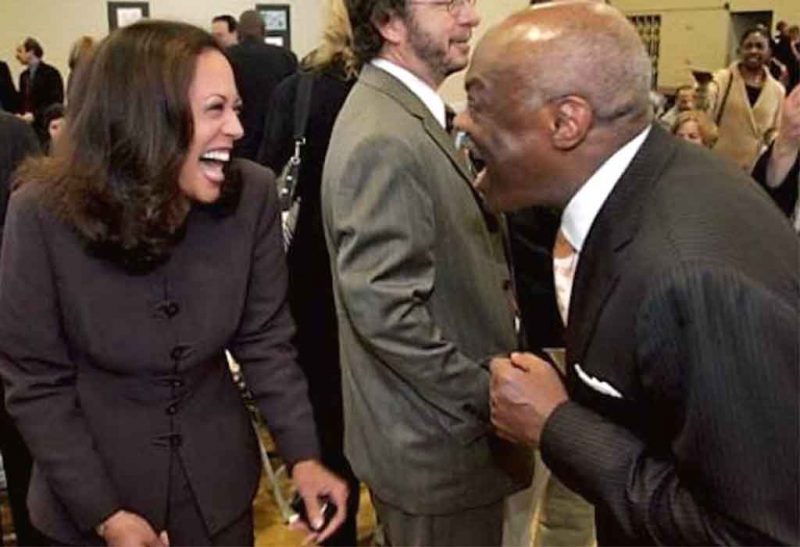 Shortly after the election of Donald Trump, I began to ponder who the DNC will go with for the next presidential showdown. I considered the failure of Hillary to draw minorities to the polls in the way Barrack Obama in the prior years, and assumed their consensus would inevitably be, “well, running a woman wasn’t enough, we’ll have to run a black woman next time to get those minority votes.”

It was here, in November 2016, that I felt confident in predicting the 2020 contender would be a black woman, but I didn’t know who. I needed only wait a few more months to know who it would be, for in July of 2017 we would find California senator Kamala Harris whoring it up to Hillary’s megadonors in a lucrative estate in the Hamptons.

Now, I use the terms “whore” and “prostitute” quite literally when it comes to Kamala because in the 90s she did in fact prostitute her body to California governor Wilile Brown to obtain her district attorney position:

As speaker of the California State Assembly from 1980 to 1995, Willie Brown was by far the Golden State’s most powerful shot-caller. In 1994 Brown, 60, met Kamala Harris, a full 30 years his junior, and she became “the Speaker’s new steady,” Brown’s “girlfriend” and “frequent companion.” The two-year relationship worked out well for Harris.

Willie Brown appointed Harris to the state Unemployment Insurance Appeals Board, which paid $97,088 a year. She served six months and Brown then appointed her to the California Medical Assistance Commission, which met only once a month but paid Harris $72,000. Call it “poontronage,” a politician’s appointment of his steady girlfriend, frequent companion, and main squeeze to a lucrative government position requiring little work.

Brown also raised money for Harris in her run for San Francisco district attorney in 2003.

Folks, if Kamala Harris did not perform grotesque sex acts on a married senior citizen, she would not have gotten these state government positions. If the use and abuse of her orifices was not offered to the wealthiest bidder, she would not have had the funds to win a district attorney election, would not have become senator, and would not be a mainstream presidential candidate. So, given her history for selling her body to wealthy political powerhouses, it is understandable why one might assume that Kamala performed similar disgusting sexual favors for the men of that Hampton house that night.

While the intent of leftist powers-that-be is to create a modern update of the successful master propagandist that was Barack Obama, Kamala is little more than Hillary in blackface. As clumsy and awkwardly desperate to appear hip/fun as her predecessor, Kamala is already stumbling over her own ignorance. This was most visibly apparent when the harlot found herself giving painfully inaccurate recollections of getting high and listening to classic hip hop albums before they had even been released. Her journalist lapdogs are trying to argue that the quote was “out of context” because Harris was distracted by several people talking to her at once (in truth, Harris is often lost and confused and thus everything is out of context to her).

But no matter how you spin it you cannot explain why weed-smoking gangsta bitch Kamala both opposed marijuana legalization and prosecuted/jailed marijuana users while she was district attorney. She has since been paid to (among other things) adapt a stance in favor of recreational use… echoes of when Hillary, after years of championing Bill’s “defense of marriage act” conveniently became pro-gay marriage when it was time to run for president. Even Kamala’s cringey comments when asked about the Jussie Smollett train wreck were strikingly Hillary-like. And to top it all off, her recent chumminess in pulling a CNN journalist into her dressing room proves just how far she’ll go to ensure that the media offer her the same glorification that was given to Mrs. Clinton.

But still, Kamala the prostitute remains the only declared 2020 candidate who checks nearly every box on the the identity politics agenda: Black, Indian, female, Californian, sex worker, and married to a Jew, Kamala is immune to nearly all the warring minority factions of the progressive left. And after Corey Booker loses to the pro-woman crowd and Warren and Gillibrand lose to the pro-minority crowd (Bernie and Biden being victims of the “No White Males” agenda respectively), Kamala will be the only one unfazed by the identity hysteria of the modern left. And when considering the DNC’s heavy use of superdelegates in their primary elections, it will be difficult to consider a candidate that can better sell themselves (literally) to the DNC’s mega powers.

With that said, I do not believe Kamala can in any way defeat Donald Trump in the Presidential election. She has alienated the religious, the working class, the rural class, whites, men, and many others that will never give her the turnaround needed to win back states like Pennsylvania and Wisconsin. She may even lose the Latino dominance the Left has unequivocally enjoyed since the Obama days. But given the uncanny tendency of America — the Babylon of our modern world, of whom the delicacies of all the merchants of the Earth are waxed — to prostitute every single one of its institutions to donors, I would not be surprised if I see the day when a literal whore becomes the President.