When Fear Runs Your Life, Ask Yourself Why

Fear controls the lives of most moderns as we lack goals at the community level.Â We watch movies about abductions, murders, and superheros saving the day, and since we don’t even know who our neighbors are let aloneÂ our selectmen and other community leaders, fear rattles around in our brains. We feel that if it can happen to the poor child who… [insert multiple choice option here: fell down the well, was abducted/raped by gangmembers as an initiation ceremony, fell off a cliff, was struck by lightning], then it can happen to any of us or our children, and so we (overre)act accordingly.

Common sense child safety should be promoted, but in a safe suburb with little in the way of violence, the simple freedom and fresh air a child feels when able to walk to school on his or her own – likely within earshot and eyesight of adults at all times during that walk – is ruined by overbearing parents and school boards who insist that children are to be surveilled at all times.

TO get to school, the child leaves home by herself, proudly walking down the boulevard in a suburb of a small city in upstate New York. The crossing guard helps her at the intersection. She lives only a block and a half from school. Yet she walks by older children waiting with parents for buses to the same school.

It has been 30 years since the May morning when Julie Patz, a Manhattan mother, finally allowed her 6-year-old son, Etan, to walk by himself to the school-bus stop, two blocks away. She watched till he crossed the street â€” and never saw him again. Since that haunting case, a generation of parents and administrators have created dense rituals of supervision around what used to be a mere afterthought of childhood: taking yourself to and from school.

In recent years, parents like Katie have begun to push back. They often encounter disapproval by other parents, scoldings by school administrators, even visits from local constabularies.

This suburbÂ had a grand total of one (1) abduction in the past thirty years and thus has changed its entire morning routine. In fact, that one abduction occurred in Manhattan – one of the largest and most densely populated cities in the entire country – not in this quaint little suburb.Â  The threat of things like abduction is always one to consider, but it’s when a community takes these unlikely occurrences too seriously that we know there’s a problem.

As civilized folk living in suburbs, we like to think we can control everything by being present for anything that might go wrong…which, ironically, destroys the entire point of living in a quiet suburb next to neighbors you know well and grow with over time.

Things like outlet covers, cord wraps, and breathable crib borders make sense in some respects: eliminate the obvious threats and put the knives away. But once the child can walk and enjoy fresh air outside, and is then part of social constructs at school, the social environment around the child begins affecting him or her at an increasing rate – and passive aggressive, constant nannying doesn’t exactly help develop a healthy mindset.

These children are the ones who end up partying in high school and college the second they have time away from authority. They essentially live under totalitarian regimes, only they’re sly enough to know when they can get away with something, so they drink/party because they’ve never just been kids. 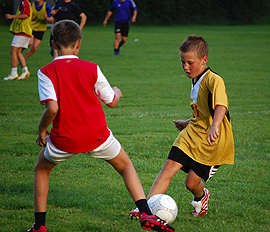 If one is given an agenda each day thatÂ includes hockey practice, piano lesson, 9 hours of boredom in the form of an educational facility you grow to resent more each passing day, maybe a half hour for television or video games – isn’t it common sense that the time away from all that will be overly valued, the activities during which time becoming more concentrated with action against such structure (drinking far too much, OD’ing, autoerotic asphyxiation – whatever)?

These are the same parents who will be wondering why their young adults are distant and want to live in another city after college, away from where they grew up, wasting their free time away from work with video games well into their 30s.Â They are the ones whoÂ end up in nursing homes as their kids are too busy to take care of them.Â  “Sorry Mom, I moved to another city to get away from you; I’m happy to pay for you to live in a place where minimum wage nursing assistants can give you sponge baths though.”Â

We’re seeing the infantalism of adults already in our society; hipsters who live only for the next five seconds instead of worrying about the next five years, and it’s no wonder that these same people grew up in a time where parents decided to become a constant, overbearing force in their children’s lives.

I know how it affected me. I was over sensitive, terrified of making mistakes. I had no social skills and still have a hard time just talking to people in person or on the phone because I was never allowed to go to social functions/dances at school or go anywhere with friends. I had really no friends. Sometimes one for awhile but never managed to maintain a friendship for too long because I could never keep in contact with them, even if they just lived around the block. I was a paranoid, straight A student and ended up dropping out of school my senior year and running away from home.

Many of the trends of the 1970s are to blame for a lot of this overinvolvement, so how do we fix it?

Communities that have a sense of either shared cultural heritage, or at least a grouping of people with similar goals, don’t needlessly resort to child surveillance, because they have more going on in their lives and live for things that benefit an entire group.Â  With this comes an idea of comfort with those around you; you know who the village idiot is and how to avoid him, but for the most part, you can trust your neighbors to watch out for each other.Â

Families are first priority, of course, but it has to be in the context of something larger so everyone in the family can feelÂ part ofÂ a community.Â This could be a church group, or just a town with healthy values that doesn’t resort to egotistical, moronic behavior.Â  The idea of shutting a family into a suburban home to watch TV and micromanage kid’s lives needs to end before we can move on – and replace fear with goals.