When a racist is not a racist 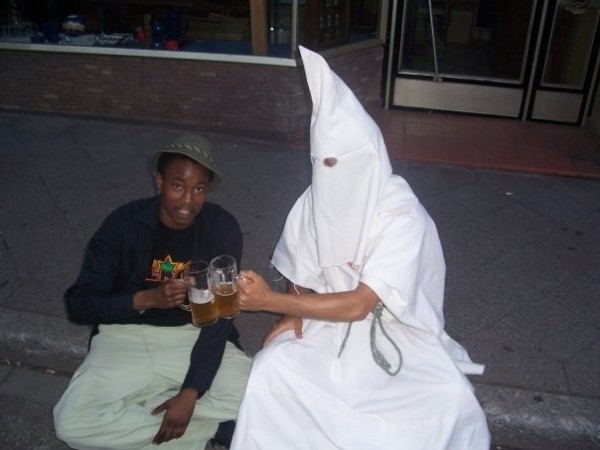 Cliven Bundy, the rancher famous for defiance of the federal government over its control of what he perceives are state lands, spoke some words yesterday that some have called “racist.”

This was much to the delight of the left, who were waiting to pounce using their issue of “racism.” It is how they shut down all conversations with conservatives: by somehow linking the discussion to racism, which is so evil it’s beyond even considering, they say.

It’s nice to have a get-out-of-jail-free card. It’s nice to have a finishing move that automatically ends a fight. For the past 70 years, as the US has steadily pursued a leftist agenda, calling someone a “racist” has been enough to drive them out of public discourse and discredit their ideas. The left has grown fat, lazy and entitled using this magic bullet.

Amusingly they never define it. The best term to use as a magic bullet is a vague one so that it can stretch like a rubber band to include anything you want it to. Even the dictionary gives a vague definition of “racism”:

1. a belief or doctrine that inherent differences among the various human races determine cultural or individual achievement, usually involving the idea that one’s own race is superior and has the right to rule others.
2. a policy, system of government, etc., based upon or fostering such a doctrine; discrimination.
3. hatred or intolerance of another race or other races.

The first item in the list above confuses two ideas. The first is that there are inherent genetic differences between groups; the second is a ranking of achievements. The dictionary writers are savvy enough not to say that noticing genetic differences between the races is in itself “racist,” as then it would be clear to everyone that this is a Soviet-style political definition. When differences are reproducible and consistent, it’s clear they’re genetic, so even common sense would find that disturbing as a definition. Instead, they combine (a) noticing differences with (b) ranking outcomes.

Their goal is then to link that with “discrimination,” as the rest of the first item and the second and third enforce. If you notice differences, correlate those with achievement, and then choose a level of achievement in which everyone cannot participate, you’re a racist. It’s basically a universal employment law written into political propaganda disguised as a dictionary definition. But it gives us a starting point for analysis.

“And because they were basically on government subsidy, so now what do they do?” Bundy continued. “They abort their young children, they put their young men in jail, because they never learned how to pick cotton. And I’ve often wondered, are they better off as slaves, picking cotton and having a family life and doing things, or are they better off under government subsidy? They didn’t get no more freedom. They got less freedom.”

Notice that no media source is publishing these by themselves without insulating layers of commentary. Why is that needed?

The secret here is that Bundy didn’t make any racial statements: he asked a question. That question strikes at the heart of our current policy by asking whether our current policy is better than past policy. Liberal commentators have reversed his question in their narrative to portray him as asking whether past policy was better than present, but the actual statement was the other way around:

I’ve often wondered…are they better off under government subsidy?

Grammatically, this is the essence of his question: have we improved things for African-Americans? He then lists a number of problems that the African-American community faces: abortion, jail, and lack of freedom. He could also mention the high intra-racial crime rate which has turned ghettos into slaughterhouses.

Bundy’s comments are controversial not because, as the media narrative hopes to con us into thinking, he asked whether or not slavery was better that what is now. He was actually asking whether our current welfare regime is in fact an improvement over slavery. In other words, he’s calling it a new form of slavery based on its poor results.

So what did they do? What they always do: counterattack by calling him a “racist,” thus assuming he’s irrational and can’t be conversed with, and that his ideas are so bad they can’t even be voiced much less considered.

This is entirely analogous to the old Soviet method of classifying dissidents as having mental health disorders, then locking them up in clinics where they kept them in chemically-induced sleep for twenty-three hours a day.

Since Bundy’s remarks, the full statement has been released, showing that our media overlords — once again — revealed only part of his commentary in order to make him look “racist.”

It’s time to wake up to the fact that democracy is a process of manipulation and we need to tax the manipulators and otherwise restrain them. The media is a political organization, and because there’s only one “inoffensive” point of view, they always go with reality-denying but individualism-affirming leftism.

Treating the media like a political organization would enable us to recognize journalists as a form of propaganda-based combatant. This would eliminate the uncertainty in their role on the battleground and let them carry weapons and defend themselves.

We also need to start disenfranchising voters who can’t figure out that the word “racism” is a dog-whistle by the left for a political threat. The threat is that if you don’t distance yourself from it, they’ll ruin your life. They’ll socially boycott you, harass you and otherwise drive you out of civilization. From the article linked above:

Many of you have never heard of me before, but the internet was quick to explain to you what a horrible person I am. There have been allegations of fraud, vote buying, log rolling, and making up fake accounts. The character assassination has started as well, and my detractors posted and tweeted and told anyone who would listen about how I was a racist, a homophobe, a misogynist, a rape apologist, an angry white man, a religious fanatic, and how I wanted to drag homosexuals to death behind my pickup truck.

The libel and slander over the last few days have been so ridiculous that my wife was contacted by people she hasnâ€™t talked to for years, concerned that she was married to such a horrible, awful, hateful, bad person, and that they were worried for her safety.

That’s a typical leftist modus operandi. It’s how they control us with fear. At this point, it’s time to recognize this control and stage a rebellion against it. We then need to remove the people who benefited by it from power, and destroy their means of doing it. Otherwise, our entire society is nothing but a controlled propaganda mouthpiece.