What To Consider When Deciding On College And Graduate School 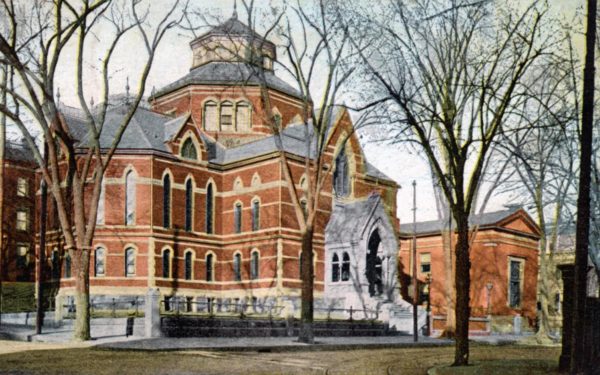 This is the final part in the series concerning young people and college that I will publish, probably for quite some time. Simply put, itâ€™s time to move on to other subjects concerning the Alt-Right. But as we have so many young people among our ranks, in this series I wanted to talk to you about the first major decision youâ€™ll even make: college.

Today we also talk about the second major decision many students are also making and itâ€™s called graduate or professional school. By professional school, I mean any graduate level program that leads to a terminal degree, such as an MBA, MFA, JD, MD, or PhD. There are others but those are the major degrees.

Graduate and professional school are often conflated. This isnâ€™t a great way to think of them. Remember back in part one of this series when I said the only reason to go to university was to obtain a credential? Professional school is for the most part about obtaining a credential. Nurses and teachers are the most common, but youâ€™ll also find lawyers, doctors, and in some places engineers looking for a masterâ€™s degree in their chosen field.

But the average student should be very careful about what they are getting into when going to graduate school. Youâ€™ve probably heard of the MFA and/or MBA. Both are professional degrees for those wishing to work in either the arts or business, respectively. Recently I wrote a piece on another blog regarding whether you should get creative writing MFA. Here is a hint: only take this path if you want to work in publishing. The MFA wonâ€™t make you a writer or artist, it will make you a person capable of participating in the professional art world, provided your MFA was from a top school.

But the MFA has been addressed by me on another blog, so let us address the MBA or Master of Business Administration first. Should you go, do you need it, will it get you anywhere?

So when it comes to the MBA there are two basic options: regional and national. When I say national I mean the top 20 MBA programs in the country. These can take the holder anywhere in America and oftentimes abroad. The best MBA programs such as Wharton will land the student a position, or at least an internship that leads to a position, in most of the top companies in the world. Thatâ€™s not a guarantee, especially in the era of the diversity hire, but itâ€™s as close as you will get to maximum reward for minimal effort. The MBA is a generalist degree. You really donâ€™t learn much outside of some decision making heuristics and leadership psychology. Accounting and finance classes are taught, but not with any depth. They mostly seem to exist to allow the manager to speak with the accounting department without looking like a total idiot.

Next letâ€™s talk about law school. The Juris Doctorate, or JD, is the degree one obtains in law school. About a decade ago there was a major push to get women and PoC into the legal field thinking that it held the key to social power. Itâ€™s a little like what is going on now in the STEM fields. A decade later we can see that many of these women are childless mid-thirties feminists who canâ€™t get a date. The men they want all prefer young women in their twenties. Thanks feminism!

But thatâ€™s a little beside the point. Many people with a JD think itâ€™s a generalist degree like the MBA. Itâ€™s not. The JD exists to prepare you for the bar or for life running a legal firm. Thatâ€™s it. Do not make the mistake of thinking law school will prepare you for a wide range of careers. It wonâ€™t, but it may provide you for a wide range of legal careers. Much like the rest of the graduate world the JD is about prestige. The better the law school you go to the better your chances of having a lot of money are. If you go to a regional law school, you might end up as a public defender in that state. You probably wonâ€™t be arguing first amendment rights before the Supreme Court.

Next letâ€™s look at the MD (and Iâ€™ll include the DO here as well). This is a general medical degree that takes you to a residency program where you will focus on a specialty in medicine. Med school is usually four years long and is often very expensive. Where you go matters, but it matters a little less than does the JD or MBA. All medical curriculum is the same with a few exceptions for things such as a required class in medical Spanish at some schools. This homogeneity is because the school is preparing you to take the USMLE, the United States Medical Licensing Exam. The USMLE comes in two parts, one you take after your first two years and the second after you finish med school altogether.

Beyond the professional degrees there is the MA/MS and itâ€™s bigger more in depth brother the PhD aka the doctorate.

Before we get to the doctorate we should talk for a moment about the masterâ€™s degree. An MA/MS degree isnâ€™t necessarily a degree to avoid. Sometimes companies will pay the student to earn the degree, or at least subsidize the degree helping you avoid massive student loan debt. Sometimes a graduate degree can be used to get a promotion or a little more money out of your employer. But thatâ€™s where your education should stop. The masterâ€™s degree is the professional degree. The PhD is the research and teaching degree. Beyond the MA lies the PhD and that is a trap set to ensnare young students looking to live â€œa life of the mind.â€ Today the doctorate is not a ticket to the upper middle class.

There are plenty of articles available online about the perils of the PhD. The simple explanation of why you should not go, though, is this: Over the past twenty-five or so years American universities have turned out far more doctorates than can be employed at universities. In the field of history, we were told about one in ten PhDs gets any kind of job in their field after graduation. Most go on to work for the government or some return to grad school looking for an MBA or a JD as a way to correct their doctoral mistakes.

And really, I canâ€™t blame them, though I do think â€œmore schoolâ€ isnâ€™t the answer to any of our problems. I think the best solution is entrepreneurship and taking a chance on something that academics typically look down their noses at, such as blue collar work. But should people on food stamps look down their noses at people making an honest living and paying for those food stamps? I donâ€™t think so.

How did it happen? Why do universities continue to produce students they know wonâ€™t get jobs? Itâ€™s a complex con job. Universities give departments a certain amount of money each year to cover salaries. But with the increase in students youâ€™ll need to increase the number of teachers. But itâ€™s not cost effective to hire one tenure track professor at $60,000 per year when you can pay three PhD students $20,000 per year and have them teach four classes each. Universities know what they are doing, and they really donâ€™t care about what happens to the students once they graduate.

Finally, Iâ€™d like you to know that most people who go to graduate school simply should not pay for it themselves. Graduate schools usually offer their grad students money, a stipend, to teach or do research called an RAship or a TAship and then waive their tuition. If you are absolutely convinced youâ€™d be better off going to a school you have to pay to attend, rethink your decision to go to grad school â€“ again. You shouldnâ€™t pay for grad school. Itâ€™s not worth it.

So that concludes my warning about universities. These four essays have covered everything from whether you should go to what to expect at the highest ends of the academic spectrum. If you doubt any of it, feel free to google yourself silly looking at the horror stories of students unable to pay debts, grad students who feel lonely and isolate, almost as if they are in a cult, or look at your professors and see how unhappy they are.

The educational system in this country needs an overhaul. The Frankfurt School is responsible for the Marxist/feminist dialectics youâ€™ll run into, but the system itself is also fundamentally broken. I think the Alt-Right has an opportunity to address the educational system in a realistic way, something neither liberals nor conservatives want to do. This might be a great way for us to branch out and address questions on the minds of young white men and women as they look for meaning and direction in their lives.

See Part One, Part Two and Part Three of this series.