What Are “Left” And “Right,” Or, Why To Avoid National Socialism 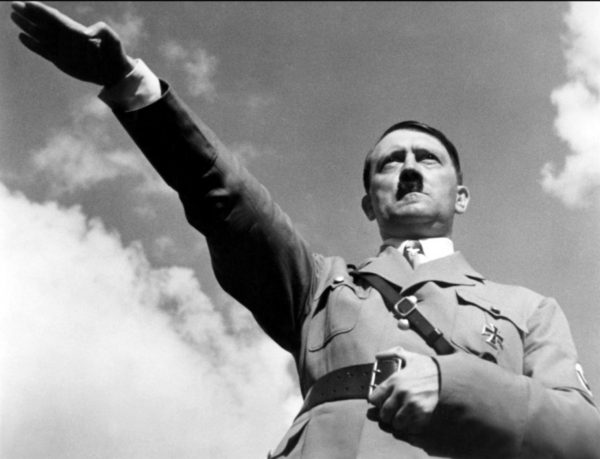 It is a popular thing to say that one is neither Left nor Right, because the public parties of both have done nothing to save us from the fate that has been obvious and inevitable for so long.

Few know what these terms mean, so it makes sense to revisit them through history. The Left arose when people in France, inspired by The Enlightenment™ and its predecessor The Renaissance,™ overthrew the monarchy in France and established a new system. Those who supported it sat on the left side of the French senate.

On the right sat those who opposed the “new” — only if one had missed what happened in Athens and Rome were these new — order, but were concerned enough for the future of their country that they wanted to work with it. They wanted to preserve as much of the old way as possible, but were hampered by the need to compromise with the democratic regime.

It is not a stretch to call it a “regime,” either, since the time after the Revolution brought changes we might associate today with Stalin-era Communism. Whole families were executed for being aristocrats; secret police were established, and people sentenced to death for hearsay evidence that they had denied the regime or supported the aristocracy. The new nation quickly impoverished itself with egalitarian social roles, since people no longer had to be productive in order to be supported, and quickly launched on a disastrous series of wars to conquer Europe so that it, too, could be democratic. Some of us refer to this process as “the Napoleonic Arc,” referencing how revolts by the people quickly produce tyrants who launch impossible ideological wars in order to keep the disintegrating society together.

All of those Left wing ideas had a single root: egalitarianism, or the idea that everyone is equal. Equal how? However they want to interpret it. They start by asking for legal equality, which means that an intelligent contributor to society for fifty years has the same rights and treatment as a criminal who has never given anything. From that the demands expand to equal participation and subsidies, or “socialism,” in which every citizen is a stockholder of the industry owned by the state, and receives dividends in the form of social benefits or entitlements paid directly to them.

The Right, on the other hand, did not have a single idea except for the notion of classical civilization, which was more a spirit and moral code than a method. Ideology like the Left has is much simpler and easier to understand. The Right wanted to preserve a society that can only be described as “Tolkienesque”: kings, lords, a feudal caste system, code of honor instead of laws, a clear ethnic identity for each group and benevolent xenophobia toward all others, customs, folkways, calendar, cuisine, and an intense reverence for nature and the gods they saw within it. This put the Rightists at a disadvantage, in addition to the “first mover” advantage the Left already had by acting first and changing the dialogue to follow their actions. We can summarize the Right as a perception that there is a kind of natural order to humanity, found in parallel in nature and the divine, where each person has an unequal place that allows them to cooperate toward the goal of civilization by contributing what they can, and being limited in contribution where their abilities are not appropriate to the task.

In our contemporary era, these terms have lost most meaning because of the political parties that represent them. Most conservatives today are a variety of Leftist, a consequence of both their necessary compromise with the Leftist regime, and the fact of democracy, which requires them to say things which appeal to the broadest section of the population. This mass culture has no awareness of history, future or the principles of civilization. It cares about tangible things, like checks in the mail from the government or displays of patriotic fervor. As a result, both parties have been made simplistic relative to their original beliefs.

No sane person can support Leftist, which resembles a fanatical cult or a mental health disorder. It is a pathology that serves individualism, or the idea of “me first” that is supported by discarding the need to maintain civilization, and spending that effort on the individual instead. This institutionalized selfishness naturally leads to the kind of social breakdown that causes the Napoleonic Arc to run its course. The era of modernity is defined by its support of individualism, naturally arising from the ideas of The Enlightenment™ and The Renaissance.™

During the early twentieth century, after the disastrous and fratricidal first world war, several movements arose to try to stop the Napoleonic Arc. Two of these, fascism and National Socialism, are commonly identified as Right-wing. However, these movements were both fundamentally modernist, in that they did not want the Old Order, but to make out of the Leftist regime something with Right-wing values. However, as history shows us, the form of the civilization outweighs its stated values, and so even those extreme forms of government led back to the same problems experienced by Leftism. Both supported some degree of socialism, a lack of caste system, suppression of the aristocracy, and the replacement of culture by ideology, even when they did not intend it according to their public statements.

Some argue that National Socialism was a different type of socialism, but the problem remains that it is a state instead of an organic civilization comprised of aristocratic leaders and different castes, and as such it is still stuck within the modern framework of egalitarianism. Any attempt to distribute wealth makes the focus of the nation the state instead of the culture, and while it is within the realm of good leadership to remove threats — relocating Others and exiling defectives — any step into socialism makes the state the replacement for the nation. This is why such arguments are unconvincing:

In our time the traditional left wing is predominantly Marxist â€” even to such a degree that the very term â€œleft wingâ€ is thought to be synonymous with the word â€œMarxist.â€ This, of course, has no basis in reality. Any revolutionary is a left-winger â€” it is just that the Marxists have had so little competition that they have been able to appropriate the term.

On the other side of the political spectrum we have the right wing, consisting of reactionaries who want to preserve the present society and the so-called Christian civilization of the West with its materialism and capitalism. The rightwingers stand up for traditional patriotic values: they are good Christians and good citizens who defend the Constitution and are loyal to their country and their monarch, if they have one.

…National Socialism seeks to build an entirely New Order based on idealism and a profound respect for the laws of Nature in all aspects of life. This, definitely, is the most revolutionary idea of this century â€” and thus very much left-wing! â€” and it certainly is not Marxist! Compared to National Socialism, Marxism is nothing but a pseudo-revolutionary idea, invented by Christianity and upheld by Liberal Democracy: If all people are created equal, why should not all wealth be distributed equally among all people? Seen in this light, Marxism is simply part of the Old Order we want to destroy.

The mistake here is not going far back enough. The Old Order to which he refers is in fact the “New Order” which was formalized with the French Revolution. To be Rightist is to want not just nationalism — the definition of nation by its founding stock and exclusion of all Others — but an entire civilization built around eternal principles. Some compare it to Tolkien, others look to the middle ages, and still others of us look at the “golden age” described by Plato, which was contra-materialist. Those early idealist times involved acting toward consequences which fit within an order of nature and the divine, an ends-over-means analysis, in contrast to materialism, which is a means-over-ends analysis designed to protect the participants from having to face consequences or exert themselves, contra their own individualism, toward goals higher than themselves. When we say we live in materialist times, it is to this distinction that we refer.

European Aristocracy guided the core of our civilization, which is the genetic strata of Indo-European people, through many tragedies and challenges. They eventually succumbed after being weakened by Mongol invasions, plagues, Muslim conflicts and inter-national conflict but what really took them out was the rise of the middle class. The middle class make their living not with their hands but their ledgers and calculators, and while they may be more natively intelligent than the lower classes, they are not intelligent enough to rule for anything but the type of sphere in which they interact. And so they like laws, rules, fines, taxes, punishments and other short-term solutions that cause long-term chaos. They overthrew the monarchy by pooling their money and dividing the power structure of Europe against itself, essentially allowing their short-sighted greed to predominate over more complex thinking and benevolent visions for the qualitative improvement of Western Civilization.

A middle class person, essentially a glorified clerk, distinguishes himself by his literacy. He knows words and texts. He then remakes the world in his image, thinking “if this, then that,” and reasoning deductively from physical facts. His interpretations of those facts go no further than the sphere in which he operates, and so he thinks exclusively in terms of money, safety, gaining customers and flattering others. “Middle class” or “bourgeois” values are the values of the advancement of the individual in the middle class, and run contrary to what civilization needs, which is for the smartest and most morally excellent people to be in command, thinking about the long term. In the centuries of middle class rule, the West has gone from greatness to mediocrity.

Leftism and National Socialism both come from the middle class tradition. They are short-sighted and focused on people, and convincing others to act in a mass like customers flocking to a new product, and so they miss both the natural and eternal in their thought process. For this reason, they are both things to be avoided. We must be extreme — so extreme that we avoid modernist thinking entirely — and escape this system of ideologies, rules and formal control. Instead, we desire unity through culture, with its roots in race and caste, which requires a denial of egalitarianism in all of its forms, no matter how surfactively nationalist they are.