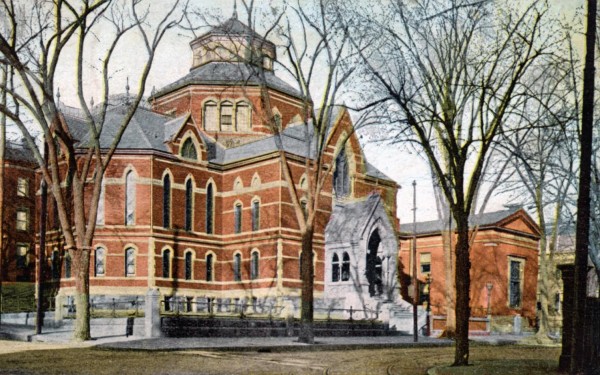 Since 1789, the West has known only one voice in politics: class warfare. This idea holds that some people are richer, smarter, stronger, healthier, more beautiful and more competent than others, therefore since we like to think we are all equal, the only possible cause for this condition is that the above-equal people oppressed the rest of us.

That word “therefore” should be said in Vincent Price intonation, maybe while throwing a handful of flash powder and waving a cape. It is the “magical therefore” which unites a non-sequitur with a popular image, and because most people are unwilling or incapable of engaging in logical thought, becomes instantly popular. That word “therefore” just sounds like winning an argument. Like saying “science proves it.”

In the years after WWII, which brought the fall of far-right governments but also revealed how horrible far-left ones are, we have added another fascination to our list: wealth transfer. This is popular because states owned by the people tend to fail spectacularly, but taxing those rich/smart/successful meanies and throwing the money to everyone else is always a vote-getter. Vote-buyer, I mean.

In the class warfare/wealth transfer model, the goal of every good and right person is to make sure that the people with extra money give it to the rest, starting with those who are the least equal. If you wonder why our postwar Left has been fascinated by Amerinds, African-Americans, Palestinians and Muslims, it is because these groups come from less-than-equal societies. You show how right and good you are by taking from rich groups — whites, Jews, men — and handing it over to these unequal groups. Bonus points if you find transgendered or gay ones.

What this means is that a few of us will carry the rest on our backs.

In the abstract — always a dangerous place — this does not sound so bad. Some have more, so give to the rest, and everyone is happy, right? All war and race riots end, all people are brothers, and enlightenment reigns… just like the end of the 9th Symphony. In reality, it means that the less-than-equal are given no incentive to improve themselves, and they become enraged because their destiny is now controlled by this small group. This puts them in a dual frame of mind, which we can see in #BlackLivesMatter and Syrian “refugees” alike: the rich should give us all they have, and we should destroy them too.

This psychology has been endemic to the Left since 1789. The poor blamed the rich for the population explosion of the poor, and they were right, in a way, because good management by the rich enabled the poor to thrive in good years. Had the rich been more bloodless and calculating, they would have kept the poor starving so this would not happen. But they had long memories to the peasant revolts of the previous two centuries, and figured they could buy off the turnip-pickers by letting them share in the prosperity. That created one of these mental loops among the poor, who saw the rich as responsible for the destiny of the poor, and wanted to both take all they could get and destroy the rich too.

Of course, that did not work out so well in France. It killed off its aristocrats, then went bankrupt, and when the curtain rose, the cynical businessmen of the port cities controlled everything. So it always is with popular revolts.

Several centuries later, we can see how class warfare shakes out from a tangential detail:

Approximately 71% of the 34 million 17-to-24-year-olds in the U.S. would not qualify for military service because of reasons related to health, physical appearance and educational background, according to the Pentagon.

In other words, in military matters, 29% of the population is carrying the rest.

Look at taxes, inventions, entrepreneurship and any other measurement and you will see the same. This is nothing new on a grand scale, because some are always more competent than the rest and they create all that a society does of actual import while the others just go through the motions (if you wonder why most jobs are do-nothing pro forma make-work, there’s your answer). But: this pattern is accelerating, and the takers far outnumber the makers, and thanks to class warfare and wealth transfer, the makers are getting ground down and desperate. Their lives are basically highly-paid slavery of 70-hour work weeks and constantly being on call.

And the end result? The middle class is disappearing. This particular symptom of falling Late Empire societies occurs when government creates wealth transfer as a means of buying off those who would start race riots and revolutions. It is no different than paying mercenaries, but this payola can be disguised as welfare, anti-discrimination, refugee aid and urban renewal.

The middle class in America is declining and no longer constitutes a majority under President Barack Obama, according to a Pew Research study, which found that â€œafter more than four decades of serving as the nationâ€™s economic majority, the American middle class is now matched in number by those in the economic tiers above and below it.â€

Pew found that the â€œshare of American adults living in middle-income households has fallen from 61% in 1971 to 50% in 2015. The share living in the upper-income tier rose from 14% to 21% over the same period. Meanwhile, the share in the lower-income tier increased from 25% to 29%.â€

Everyone demands this from the West. When North Korea’s four working farms fail, they threaten to launch nuclear double-headed missiles at us so we pay them foreign aid. The Palestinians extract tribute from the Israelis, BlackLivesMatter demands it from Ferguson, and Al Sharpton squeezes it out of corporations. They are all in the unhealthy state of being dependent on us and, because being dependent is to feel helpless, hating us and wanting us dead. Within the West, the takers feel the same way about the makers.

“Equality” sounds good in the abstract until you think about it a moment and realize that it always must involve taking from the successful, and giving to the less successful, which makes the latter group angry dependents. This is why equality destroys those above: it works them to death, and then confronts them with an enraged enemy who wonders why there is not more wealth for them. Only when the more successful groups live in mud huts will these demands cease, and then they will change to demands for revenge upon the more successful for failing.

Wealth transfer and class warfare are a form of conquest. In this game, the poor are the pawns, and the real victors are those who sell the mediocre products that poor people live by: alcohol, entertainment, payday check cashing, pawn shops, pornography and overnight auto loans. This group are not talented enough to profit from the thriving, but they sure do benefit from the decline.

We have been held hostage and enslaved by the demands of the herd for too long. This path ends in certain doom; no one will speak of it. Its origin is in the defensive ego which squirms at the thought it might be inferior to anything, and wants to destroy those above it as a result. But the actual motivation is good old-fashioned mediocrity and opportunism, disguising themselves as altruism as they inevitably do, wielded by those too incompetent to realize they will destroy the real source of their wealth, which is a society advanced enough for them to do business in.